This article was first published by BusinessGreen and is reprinted here with permission.

Serious question: Can anyone think of an environmental regulation that has crippled an economy?

I don't mean shaved a few percent off a polluting company's share price or forced the lucrative fly-tipping trade out of business. I mean properly knocked a handful of points off GDP and fatally eroded the competitiveness of a former economic power.

There are no doubt examples of poor environmental regulations: laws that applied the precautionary principle with a bit too much precaution; legislation that blocks activities that would provide an economic boost without causing too much damage to the environment (supporters of GM and fracking no doubt would argue the current regulatory frameworks for these technologies fall firmly into this category).

But have any environmental regulations unequivocally damaged the economy such that the rules eventually were axed?

I know, I know. You can't prove a negative. You can no more conclude that introducing an environmental regulation dealt a 3 percent blow to a country's GDP than you can 100 percent conclusively prove what would have happened if we had managed to start cutting greenhouse gas emissions in the 1980s instead of waiting until the 2030s (hopefully).

But still, is there a single piece of environmental regulation where you can construct a credible argument to show that the economy is a lot worse off because of its existence? Because I can't think of one. 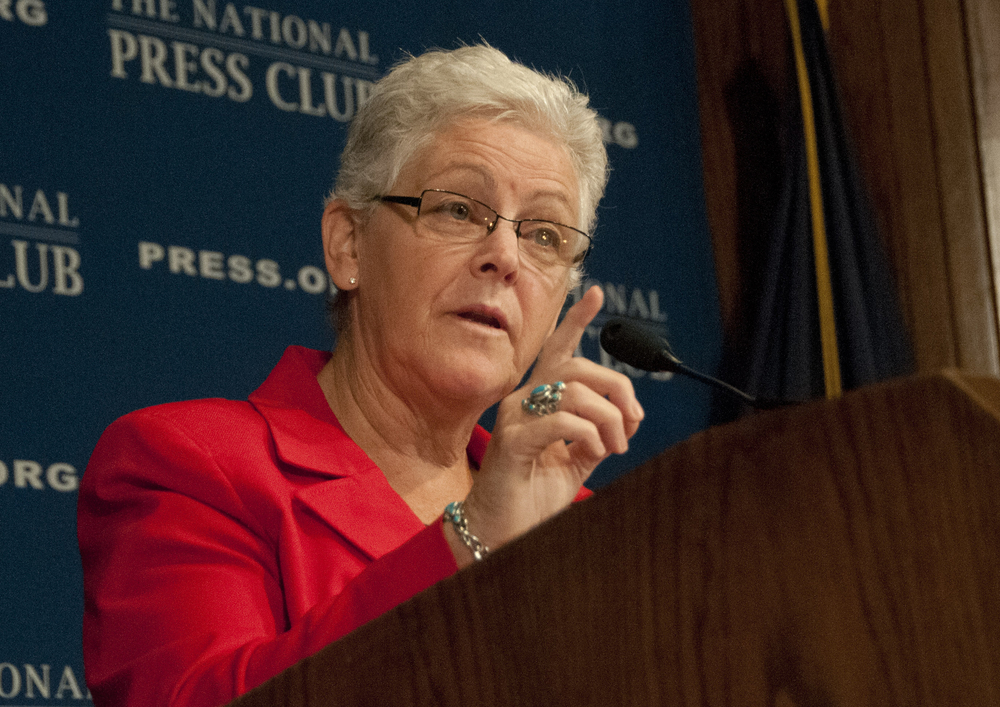 The result was a wearingly familiar skirmish between the EPA and green groups on one side and anti-regulation Republican Party politicians and industrial groups on the other. The greens welcomed the regulations as a step that still did not go far enough in tackling a serious environmental problem, while industrial groups warned it would push up costs and harm the economy.

So far, so predictable. Except this time business warnings comprised a particularly acute form of panicked hyperbole.

"This new ozone regulation threatens to be the most expensive ever imposed on industry in America and could jeopardize recent progress in manufacturing by placing massive new costs on manufacturers," thundered Jay Timmons, chief executive officer of the National Association of Manufacturers. A tightening of smog rules potentially would represent "the most expensive regulation ever imposed on the American public," warned Jack Gerard of the American Petroleum Institute.

I'm sorry, but what? In the nation of prohibition and Jim Crow regulations, tightening ground level ozone standards from the current level of 75 parts per billion (ppb) to within a range of 65 to 70 ppb could be the "most expensive regulation ever imposed on the American public"?

The recent recovery in U.S. manufacturing driven by Silicon Valley innovation and relatively low cost natural gas and renewables is apparently so fragile that businesses can't cope with the cost of deploying proven technologies for tackling smog and keeping their workers and communities healthy?

The EPA's extensive modeling showing how improving air quality will deliver net economic benefits counts for nothing, because some lobbyists say so? I'm not sure how industry groups can expect anyone to buy such exaggerated claims.

Meanwhile, on the other side of the Atlantic, a similar battle is playing out. BusinessEurope has this week continued its tribute act to a pin-striped 1990s industry lobbyist, attacking everything from maternity rights to circular economy proposals and air quality standards, with warnings that the commission's attempts to enhance resource security and deliver clean air will cause significant harm to the economy.

In the U.K., the steady drumbeat of criticism aimed at the Climate Change Act implies the U.K.'s position as an economic powerhouse would be assured if we just ditched our long-term carbon targets.

The problem with these campaigns is not in their opposition to environmental regulation per se.

When it comes to introducing and reforming policy measures, the Hegelian dialectic (there's one for all the philosophy graduates) created by those for and against a new regulation is critical. It is in constantly justifying themselves that green regulations become more effective.

No, the problem with these various anti-regulation campaigns is that they are so exaggerated, so lacking in nuance, that they quickly lose credibility. What should be a productive debate descends into a slanging match. (Yes, I am aware some of the more alarmist green groups are guilty of this hyperbole, too).

Does any independent observer really think a tightening of U.S. smog regulations that, remember, will be phased in between 2020 and 2037, represents the most expensive regulation in history?

Does anyone outside the climate skeptic cabal look at the performance of the U.K. economy over the last five years and think, "Forget global economic crisis, an economy overly reliant on finance and woeful productivity; the real cause of our problems is that our power costs fractionally more than some of our European neighbors"?

Does anyone look at the recent economic recovery and re-shoring of some manufacturing operations and think our GDP growth would be 3 percent higher again if we didn't have legislators demanding that we deal with the toxic air pollution in our cities?

It takes a pretty special leap of ideologically molded imagination to suggest the economy would be basking in sunlit uplands if we simply gave up on decarbonization. But that is essentially what some pretty respected commentators appear happy to suggest.

In a speech last year, President Barack Obama offered the perfect assessment of how tired these depressingly predictable arguments are becoming, skewering each and every complaint leveled at his climate change regulations.

"What you'll hear from the special interests and their allies in Congress is that this will kill jobs and crush the economy, and basically end American free enterprise as we know it," he predicted, with unerring accuracy. "And the reason I know you'll hear those things is because that's what they said every time America sets clear rules and better standards for our air and our water and our children's health. And every time, they've been wrong."

There are legitimate reasons for challenging environmental regulations and lobbying to ensure they are as effective as possible. But apocalyptic warnings suggesting cleaning up our air and water or stabilizing our climate will bring economic collapse and eye-watering costs aren't just inaccurate scaremongering, they are staggeringly defeatist as well.

If a government tried to ban fossil fuels overnight or block all cars from entering a smog-choked city, then yes, the short term damage on the economy would be immense. But that is not how environmental regulations work.

They tend to be measured, phased in over time, based on the best available science and designed to keep short-term costs to a minimum while maximizing long term benefits.

That's not to say that policymakers always get it right, but crying wolf all the time about excessive economic impacts that never materialize helps no one, least of all those polluting businesses who have to adapt to changing environmental realities.

So, I ask again: Can anyone think of an environmental regulation that has crippled an economy? Because I can't.

Global net-zero commitments double in less than a year

Al Gore: Climate action is 'bound together' with racial equality and liberation

7 key priorities for a green and resilient recovery