What does energy productivity mean?

It’s time to add another phrase to the sustainability executive’s cheat sheet of topics guaranteed to pique the interest of his or her colleague in the finance department: "energy productivity." In fact, you should write this one in ink.

President Barack Obama galvanized attention around this issue in February 2013, when he challenged U.S. citizens, businesses and communities to double their energy productivity by 2030. Doing so wouldn’t just save $327 billion annually in power bills, it also could create more than 1.3 million jobs, according to an analysis by the Alliance to Save Energy. Plus it could cut carbon dioxide emissions by 33 percent.

Technically speaking, nothing at all. In fact, the two concepts are intimately related. The idea of "efficiency" appeals to those obsessed with cutting costs. By contrast, the notion of improving "productivity" speaks to the grander potential for evolving how your organization sources and consumes energy while simultaneously expanding economic growth.

Initiatives like EP100 motivate us, and hopefully many others, to apply intelligent solutions and indeed make possible what is now considered impossible.

"There are many reasons energy productivity as a term has become part of the energy and climate lexicon," said Mark Kenber, CEO of Climate Group.

To draw attention to the issue and encourage companies to recalibrate their focus, Climate Group created the EP100 pledge — a declarative list of businesses committed to doubling their energy productivity within the next 25 years. (A second tier of participation is for those that want to focus on a smaller goal of improving productivity by 2.5 percent annually.)

Many companion initiatives are under way, including one spearheaded by the Global Alliance for Energy Productivity, and Sustainable Energy for All, an effort backed by the United Nations and the World Bank. 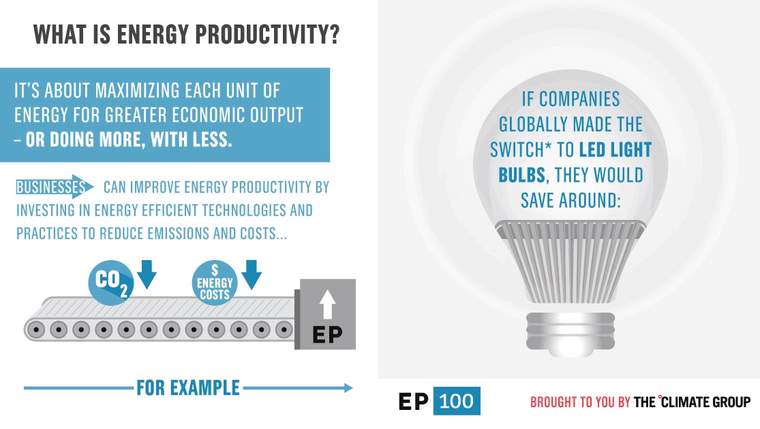 So far, three organizations publicly have declared energy productivity commitments related to the EP100 campaign: Mahindra, an Indian manufacturer of tractors and other heavy equipment; Covestro, the German chemical and materials giant; and Johnson Controls, a technology conglomerate that sells everything from building control technologies to automotive batteries.

"To reduce your own energy use by half — or to double your energy productivity — may seem impossible to some companies today," said Richard Northcote, chief sustainability officer at Covestro, in a statement. "But initiatives like EP100 motivate us, and hopefully many others, to apply intelligent solutions and indeed make possible what is now considered impossible."

How can an organization get there?

Alongside the campaigns to showcase trailblazing companies embracing energy productivity are several other initiatives focused on highlighting technologies and business management processes that might help organizations achieve ambitious goals.

One influential effort is the Energy Management Campaign launched in early June at the Clean Energy Ministerial in San Francisco. The call to action: Get business, industry and government leaders behind adoption of ISO 50001, a system of best practices for energy management.

Energy productivity is the macro to energy efficiency’s micro.

"Implementing the ISO 50001 standard provides a consistent and measurable way, across countries, for organizations to increase energy productivity and reduce carbon emissions," said Mexico's Secretary of Energy Pedro Joaquin Coldwell in a statement.

You also should keep an eye on the Energy Productivity Innovation Challenge (aka EPIC), which seeks to recognize best-in-class technologies such as energy storage or Internet of Things solutions along with business models that help businesses accelerate their energy efficiency and clean energy adoption programs.

The initiative is being spearheaded by Energy Unlocked, a nonprofit that seeks to accelerate "global innovation in smart energy." (Disclosure: GreenBiz executive editor Joel Makower is a judge for this competition, which will announce the first set of regional winners in October.)

The more confidence businesses and governments have that these approaches will work, the faster more companies will rally behind energy productivity.

Molly Webb, founder of Energy Unlocked, said the capability for a particular approach to scale will be a major factor in selecting the winners. One area where multiple applications already have been received is for demand response systems, vitally important for driving the addition of more clean energy systems to the electric grid.

The more confidence businesses and governments have that these approaches will work, practically speaking, the faster more companies will rally behind energy productivity, she said. EPIC already has received submissions from Australia, India, Europe and the United States.

"Energy efficiency is about reducing energy," Webb said. "Energy productivity is about the cost of energy, and I think we’re entering an era where energy — electricity or other types of energy — are going to have different costs based on when you use them or whether they are easier to transport, deploy or not. That differential in cost, I think is going to be a big driver for change."

Is energy productivity the missing link for the Paris Accord?

Companies double down on energy productivity

As the world warms, the call for climate-friendly cooling heats up