<p>The same week as the American Society for Quality meets in Anaheim, Calif., for its annual conference, it awards the Hutchens Medal to GreenBiz Executive Editor Joel Makower.</p>

The Spencer Hutchens Jr. Medal "recognizes the achievements of an individual who demonstrates outstanding leadership as an individual, business leader and cause advocate for social responsibility, primarily focusing on the marketplace, environment, workplace and community," the ASQ website explains. "The medal seeks to showcase how the individual's impactful results have led to societal change."

He won the award for "his leadership in helping the mainstream business community align sustainability and social responsibility with business success, and his ability to tell compelling stories that both inform and inspire business leaders toward profitable action," according to a letter from James J. Rooney, chair of the ASQ board. 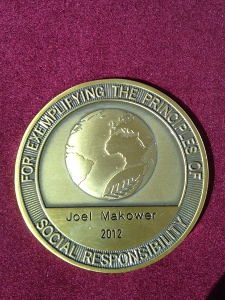 The award underscores the connections between sustainability and quality, Makower said. "In the late 1980s and early 1990s, when I was first writing about what's now called sustainability, the quality movement was picking up on the trend -- they called it 'total quality environmental management,'" he said. "It struck me that they fit nicely together: They both have to do with eliminating waste and inefficiency, and with continuous improvement."

He hopes that "sustainability" soon goes the way of "quality." As he put it:

Even more telling is what happened to "quality" over the past two decades -- it's largely disappeared as a business trend. That doesn't mean quality has gone away inside companies -- far from it. But it's become embedded into business processes. It goes by other names: just-in-time management, Six Sigma and other things. These things are so common, so much part of the corporate fabric, that they no longer talk about them.

The question -- and the opportunity -- is whether and when we stop talking about sustainability, whether and when it becomes so much a part of the business fabric that it no longer is noteworthy. We're just beginning to see that in some companies, but we've got a long way to go.

Dorothy Bowers, former vice president of environmental policy at Merck & Co., nominated Makower for the Hutchens medal. "Dorothy was one of the pioneers in the field, so I'm honored she nominated me," he said.

Bowers, who retired at the end of 1999 after 25 years with the company, led the development of the environmental department and initiated public environmental reporting in the early 1990s, which led to Merck's first sustainability report.

Episode 333: The buzz from Climate Week

Episode 332: What the heck is 'nature tech'? A green building legacy