One day after the anniversary of Hillary Clinton’s defeat in the U.S. presidential election, her husband, former President Bill Clinton, took the stage at last week’s Greenbuild conference in Boston.

"Don’t change your life because of a momentarily bizarre course of human affairs," he advised in a not-so-subtle reference to the current Trump administration. The crowd of over 20,000 chuckled and applauded in what felt like a collective release of tension. 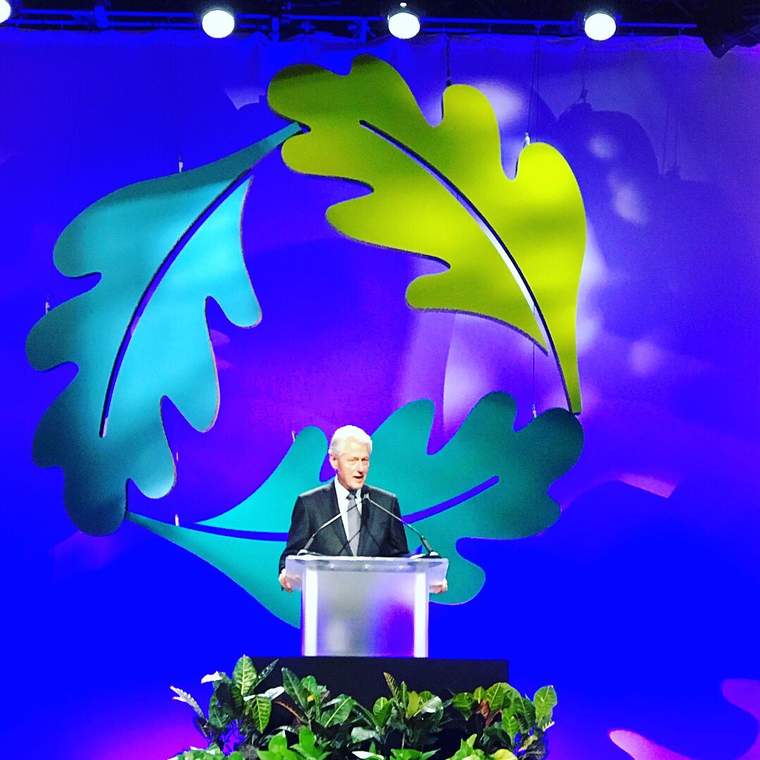 USGBC
<p>Former U.S. President Bill Clinton spoke at Greenbuild 17 in Boston on Nov. 9.</p>
In a hopeful speech about embracing diversity, creating shared opportunities and staying the course toward building a more sustainable environment, Clinton sought to inspire action while being realistic about outcomes.

"We have to be the change we advocate," he said. "We have to do it without the guarantee of success or permanence, but with the certainty that just making the effort is worth it."

This was the first Greenbuild under President Donald Trump’s sustainability-obstructive administration and following a year of devastating climate-related disasters. As a result, topics such as equity and inclusion, climate change resilience and market transformation were front and center this year.

Green buildings for all

Perhaps as an indication of the green building community’s need to break free of its historically non-diverse reputation, Greenbuild’s theme this year was #ALLIN — emphasizing the importance of ensuring that all high-performance buildings and sustainable communities address social and environmental challenges as well as include and serve those that are typically underserved.

USGBC incorporated this theme into the event in several ways, from the inclusion of more global voices (with Greenbuild expanding to Germany, China, India and Chicago next year), to the supportive and celebratory Women in Green Power Breakfast, to USGBC President and CEO Mahesh Ramanujam’s announcement committing the organization to "20 percent growth by 2020 for frontline and underserved communities."

How do you give people the quality of life they want and also address their carbon footprint without one exploding the other?

But as with many new initiatives, challenges lie ahead. Roger Platt, senior vice president of strategic planning at Green Business Certification Inc. (GBCI) and an executive liaison with the USGBC, explained: "The great, most progressive cities in America are trying to solve social equity problems — how to solve affordable housing problems and preserve their sustainability and green performance in the process. That’s the same challenge that people are having in India and China. So how do you give people the quality of life they want and also address their carbon footprint without one exploding the other?

The road to resilience

Given the number of climate-related natural disasters around the world, resilience is a high priority for many.

Green Building Council Australia’s Head of Market Transformation Jorge Chapa indicated "holistic resilience" — social, economic and climate change resilience — as well as the biodiversity and ecology that are being lost to development among the country's top priorities.

"For Australia, we think these are critical to creating a sustainable, healthy, resilient and positive environment," he said.

Gensler’s Principal and Director of Sustainable Design Kirsten Ritchie focused on community resilience, asking, "Whether it’s fires, storms, sea level rise, a whole bunch of stressors that are on the community, how do we design it to be more responsive and resilient, so that when something does happen, it recovers and comes back maybe even better than it was before?"

We need to figure out what kind of information is out there that cities can collect and use, in order to really understand whether resiliency is working in each sector.

But resilience is hard to measure.

Arc Skoru measures performance across energy, waste, water, transportation and human experience, said its vice president, Gretchen Sweeney, but is still figuring out how to measure resiliency in each of these categories.

"So we need to figure out what kind of information is out there that cities can collect and use, in order to really understand whether resiliency is working in each sector," she said. "There are a lot of different ways we can probably do this, but we need a few key metrics that a lot of different places can collect and analyze in order to really figure out where we’re making an impact."

And Skanska Chief Sustainability Officer Beth Heider is "looking ahead toward what the impact of resilience will be, not only on the world that we’ve built but on our business."

From reinventing the chemistry of materials in our built environment to scaling green building across entire communities, there was a lot of discussion about what it will take to actually change the industry and those impacted by it.

John Warner, president and chief technology officer at the Warner Babcock Institute for Green Chemistry — widely known as "the father of green chemistry" — said that chemistry is often a polarizing topic because chemists are not traditionally trained to consider toxicity or environmental impact. Once chemists understand our interdependent, cyclical systems in nature and how to invent within a circular economy model, better products and processes will be created.

Simplifying systems will be critical in order to meet green building aspirations.

And they just announced the acquisition of real estate service RELi to address resilient neighborhoods and communities.  With existing offerings such as LEED for Cities, LEED for Communities and LEED for Neighborhood Development (LEED-ND) — and a new partnership with STAR Communities — it has become confusing for owners, practitioners and builders to determine which system to use and how impactful they actually will be.

Simplifying systems will be critical in order to meet green building aspirations.

As Clinton concluded during his plenary, we live in an interdependent world where the most important thing isn't conquering climate change, solving international relations, turning the tide on cyberterrorism or even removing U.S. economic immobility.

"The most important thing is how we think," he said. "Because how we think will determine whether together, we can do the right thing."