Sports stadiums have been slow to adapt to lighting efficiency breakthroughs due to concerns about cost and quality. Is that finally changing?

Good lighting might seem a given at flashy sporting events.

But orchestrating thousands of pricey, power-intensive lights remains one of the most important facets of managing multimillion-dollar sports stadiums — and it's a field that is changing fast.

Performance always has to be stellar, and significant costs need to be minimized. Lighting is also a major factor in how green (or not green) a venue is. Light Emitting Diode (LED) lights are both high performing and energy efficient, but they initially faced a slow adoption curve in the industry because of high costs. As the cost curve moves down, however, more venues are making the switch to LEDs.

For decades, sports stadiums and arenas have been illuminated by metal halide lights. Five to six times more energy efficient than incandescent lights, metal halide lights also give top quality white light, which is crucial for the illumination of both outdoor night games and events held indoors. Metal halides also contain mercury, which make them an environmental concern at end of life. 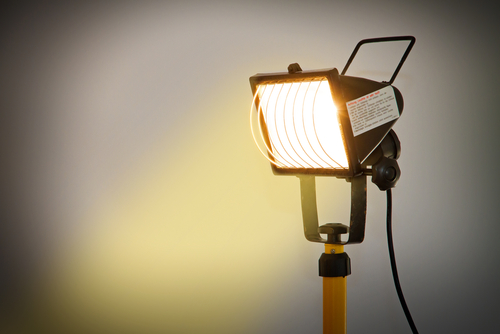 Despite the obvious win-win on the environmental side, teams and sports facilities managers were slow to adapt to LEDs because of concerns about light quality (it’s a softer type of light) and cost. Even über-green Levi’s Stadium, new home of the San Francisco 49ers in Santa Clara, Calif., went with metal halides because of the light quality issue. But that decision was made in 2012.

Technological advances on the lighting and broadcast sides (such as HDTV) since 2012 have flipped the concerns about light quality. LED lighting systems are now preferred vs. metal halide by venue and television alike.

As a result, the trickle of LED-lit sports venues has become a steady stream. Some noteworthy examples of illustrative change in the sports world:

The National Hockey League, which authored the first sustainability report for any North American professional sports league, also has taken a leading role in the installation of LED lighting systems.

PNC Arena in Raleigh, N.C., became the first U.S.-based NHL arena to go LED this offseason. Musco Lighting outfitted the home of the Carolina Hurricanes (as well as North Carolina State's basketball arena) with a state-of-the-art system expected to reduce energy usage up to 70 percent.

The Bell Centre in Montreal started the NHL’s LED-ball rolling back in 2012. Lighting quality and reliability were the drivers for the Canadiens’ decision more so than the environment.

Regardless of the motivation, the decision has led to a dramatic reduction in energy usage.

NRG Stadium, den of the National Football League's Houston Texans, and the University of Phoenix Stadium, home to the NFC West-leading Arizona Cardinals (and soon-to-be-host of Super Bowl XLIX), both installed LEDs in advance of the 2014 season.

“The payback was quite attractive in terms of the energy savings, not just for our events but in all events that happen out here," Texans President Jamey Rootes said in a recent Washington Post Innovations blog post by Matt McFarland. "You add to it the softer benefits of the quality of the presentation on television, the quality of the presentation for the fans in the stadium, a more vibrant stadium experience.”

The most popular sports league on the planet just recently has gotten into the LED act.

Current league leader Chelsea — a London soccer club valued at $868 million by Forbes — took an initial step in the field this summer, along with surprising second-place team Southampton.

The home of the National Basketball Association’s Clippers and Lakers, women's professional basketball's Galaxy and the NHL's Stanley Cup Champion Los Angeles Kings made the move to LEDs this summer.

LED lighting systems are making their presence felt at venues large — a la Ohio Stadium, the 106,000 seat, zero-waste home of the Buckeyes — and small, such as the 2,350-seat hockey arena at Union College in
Schenectady, N.Y.

LED adoption will continue to grow on campus, given the aggressive move colleges and universities are making towards greening in all aspects of their operations, sports included.