The Greening of Professional Sports

You're looking above at AT&T Park, where the World Series champion San Francisco Giants play. It's one of the greenest stadiums in the country, writes Amanda Little in Forbes:

"[The Giants'] stadium, AT&T Park, which accommodates about 45,000 fans, runs its scoreboard on solar power, recycles and composts nearly 50 percent of its waste, sources eco-friendly napkins, containers, utensils, toilet paper and the like, and has enough efficiency features to cut the stadium's annual energy and water bills in half. That amounts to huge savings, given that stadiums can consume as much energy as small cities."

This is part of a trend, says Little, and I'm pleased to report that it is a trend being led in many respects by my NRDC colleague Allen Hershkowitz, who is quoted in the story. 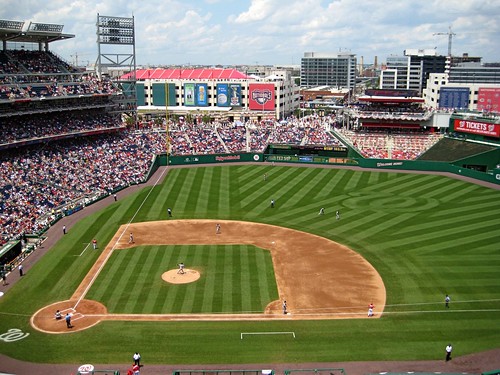 I've written before in this space about green stadiums in Washington and Dublin. Nationals Park in DC (above) sports a great location and a green roof donated by the Chesapeake Bay Foundation, among other features, and was the country's first stadium to be LEED-certified. I've also written about DC's Verizon Center, whose incredible location has been a major catalyst for downtown revitalization and which draws a huge majority of its customers from the plethora of public transit lines that serve the facility. (I walked there from work Monday night to watch my Georgetown Hoyas beat Tulane; Austin Freeman dropped 23 points and Jason Clark had 17 points, 11 rebounds and five steals.) We take the arena and surrounding neighborhood vitality for granted now, but building the facility there was a brave and farsighted move by the late Abe Pollin back in the early 1990s. 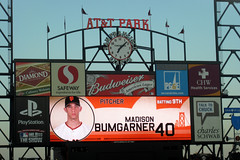 I was brought up to date on the broader subject of greening sports and entertainment by an excellent presentation of Allen's at last week's multi-day meeting with sleep deprivation NRDC staff retreat. It's been an area of focus for Allen and a few other colleagues for some time, and they have been working with a number of leagues and teams, as well as with entertainment events such as the Oscars, to improve these high-visibility businesses' environmental performance.

It's paying off. Both Allen and Little report that sports teams are stepping up recycling and efficiency in their facilities, attracting lucrative corporate sponsorships with green messaging, and raising consciousness among fans. Other facilities mentioned in Little's article include Boston's Fenway Park, Atlanta's Turner Field, and stadiums and arenas hosting the Philadelphia Eagles, Utah Jazz, Portland Trail Blazers and Phoenix Suns.

Of course, not everyone has been converted yet. Cowboys Stadium in Texas looks like a swell place to visit if you're a car (or, even better, a helicopter, since the traffic must be massive): 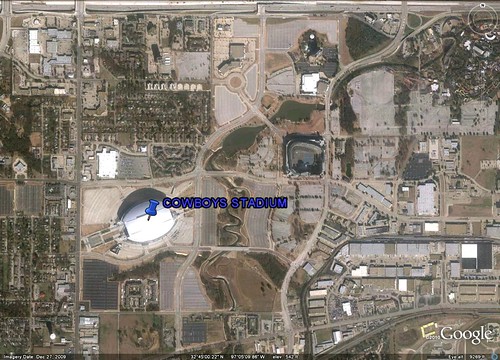 Little describes the Cowboys' facility as "an energy-guzzling Colossus averaging $200,000 in monthly utility bills and consuming about as much power as Santa Monica, California." Not too green, that. Compare the site for Dublin's super-green Aviva Stadium, below:

Or check out Vancouver's Empire Field, below, where that city's soccer franchise plays. It is amazingly made from some 22,000 recycled tires.

Little's article describes the bottom-line benefits to teams from energy savings and a more favorable public image. And she also points out that, given the toxic political climate in the US, working directly with business and other non-government entities may be a more fruitful way to achieve environmental benefits than trying to work for legislation: 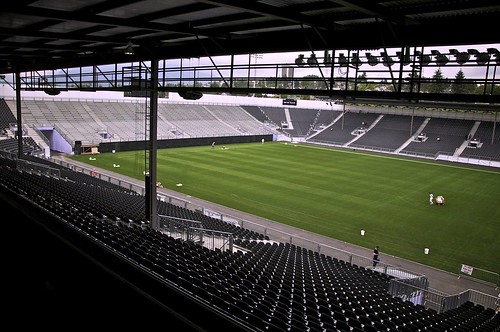 "At a time of federal paralysis on energy and climate legislation, our push for progress must happen from the ground up, in our schools, churches, cities, states—and sports teams.

"Let's applaud the teams that are greening professional sports. Let's also exhort them to do more, and demand similar practices from those that have yet to join the movement. The reality is, we're not getting positive environmental action from our elected leaders, but we might be able to get it from our players. For now, anyway, they're more popular than our politicians—and perhaps more influential."

She will get no argument from me on that.

Move your cursor over the images for credit information; top photo CC-licensed by randychiu.

This blog post originally appeared on The NRDC's Switchboard Blog, and is reprinted with permission. 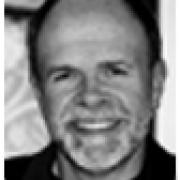