<p>A new report from the nonprofit concludes much of the cloud is powered with dirty energy sources by companies that often fail to disclose how much energy they use,</p>

Following well-publicized campaigns to push electronics manufacturers to phase out toxics from their products or buy seafood from sustainable sources, Greenpeace has now turned its attention to the energy used to power 10 of the top cloud-based IT firms.

It turns out much of the cloud is powered with dirty energy sources by companies that often fail to disclose how much energy they use, according to its new report, "How Dirty is Your Data?" While the report gave some kudos to Yahoo, Google and Akamai for prioritizing green power, Greenpeace also singled out Apple, Twitter and Facebook for criticism over their practices or silence.

"The IT industry often points to the cloud or cloud computing as the new, green model for our IT infrastructure needs, but few companies provide data that would allow us to objectively evaluate these claims," Greenpeace said in the report. "In contrast to the functionality of their products, there is a pervasive lack of transparency regarding the environmental impact and energy consumption of IT operations. It is increasingly troubling that IT companies characteristically refuse to disclose the amount of electricity consumed, carbon emitted, or nuclear waste produced as a result of maintaining our digital infrastructure." 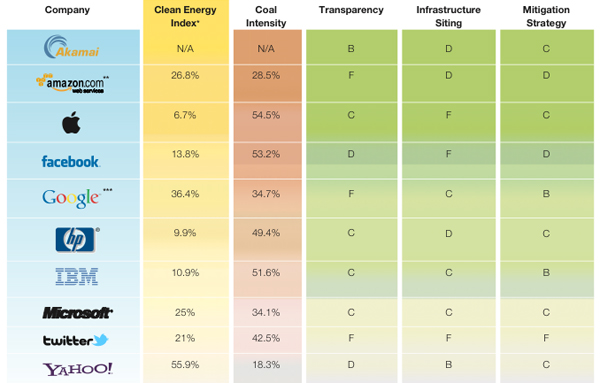 Greenpeace gave Akamai a high score of "B" for transparency because the company publicly reports its cloud-based emissions and for its efforts to give clients a monthly carbon footprint summary of the emissions generated from the content delivery through its servers.

While there is a move to make products and processes more energy efficient, and a revolution taking place in data center design, Greenpeace said, IT companies have been slow to revamp the type of energy used to satisfy consumption. In fact, some companies are extremely coal-intensive, meaning a large percentage of coal generated electricity is used to power the firm's data centers. Apple topped the field, with a coal intensity of 54.5 percent, followed by Facebook -- the subject of a Greenpeace campaign aimed at getting the company off coal power -- at 53.2 percent.

Recent decisions on where to located its data centers earned Yahoo a "B" score for infrastructure siting. Greenpeace also assigned "B" scores to IBM and Google for their mitigation strategies. Google, coincidentally, announced today its plans to purchase 100 megawatts of wind power from a wind energy project that will be operational later this year. The news follows another Google announcement on Monday that it recently invested $100 million in an Oregon project that will become the largest wind farm in the world.

Google, however, received an "F" in transparency from Greenpeace. Twitter, meanwhile, received "Fs" in each catergory.