From trendy sustainable sushi restaurants to illegal fishing showdowns reminiscent of action movie plots, concerns about over-fishing and the volatile state of the world's oceans are now more widely recognized than ever.

Yet that's not necessarily to say that the publicity around sustainable seafood has translated to guilt-free sashimi.

"Sustainable seafood has been a trend for many years now," David Pinsky, a senior Greenpeace ocean campaigner, told GreenBiz. "It's something that is certainly getting increasing attention, but it's not as simple as getting MSC-certified seafood." 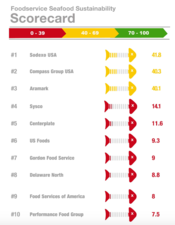 Continued overconsumption of species with severely depleted stocks, most notably tuna, is one concern. Alleged labor violations in the U.S. and abroad, which often fall outside the purview of sustainability certifications, are another.

The new "Sea of Distress" report gives food contractors Sodexo, Compass Group and Aramark the highest marks in an overwhelmingly lackluster field of 15 large distributors and contract management companies. The companies were the only three that responded to a seven-page Greenpeace sustainability survey, which some in the industry points to broader skepticism of the activist group.

“Greenpeace refuses to join the grown-ups at the table to discuss real sustainability studies," Gavin Gibbons, spokesman for the National Fisheries Institute, told SeafoodSource. "This would clearly take too much time away from hitting donors up for cash."

Pinsky contends that Greenpeace deliberately profiled "the biggest players" in food purchasing over a period of several months. The worst-performing companies profiled included AVI Foodsystems, Elior North America and Reinhart Foodservice, which were dinged for offenses like lagging public information on sustainability guidelines or continuing to stock heavily over-fished species like bluefin tuna.

Thai Union Group, the company behind the "Chicken of the Sea" canned tuna brand, is another familiar target for Greenpeace. Customers of Thai Union, such as food distribution giant Sysco, were also called out for failing to demand stricter supplier rules — a question of market share and sustainability incentives often raised in industries like textile manufacturing as well.

“There’s big money in food service," Finsky said. "One of the things we’ve tried to do is illustrate that these companies are everywhere."

As with the rest of the food industry, seafood purveyors are contending with a shifting tide in consumer and activist demands when it comes to how and where seafood is sourced.

The United Nations Food and Agriculture Organization (FAO) reported earlier this year that 90 percent of the world's fishing stocks were either "fully fished" or overexploited, leaving little room for increased demand as the global population grows.

"The state of the world's fisheries has not improved overall," the FAO report stated, adding that fish will likely come into play as part of the UN's Sustainable Development Goals to erradicate hunger and poverty.

It's also important to note that the global fishing industry isn't all boats on the high seas. Aquaculture, which has its own existing sustainability standards, is an increasing growth market for production, FAO reports. 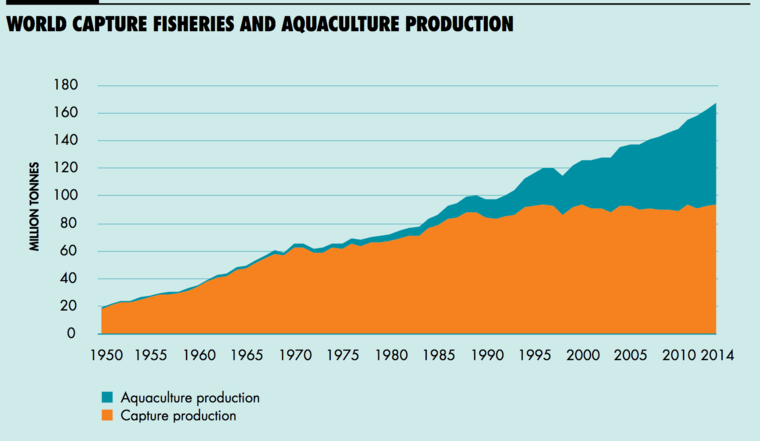 As of 2014, the agency estimates that the seafood industry employed some 56 million people worldwide, 36 percent of whom worked full-time. This demographic — the manpower behind global fishing systems — is also increasingly central to debate over the industry's future, particularly after revelations of reported human rights violations.

Forced migrant labor, also increasingly raised in sustainability conversations about the mining and electronics sectors, is a problem that Greenpeace says companies and certification bodies like MSC should address better. The nascent realm of traceability technology could be one avenue to assist in this pursuit.

In addition to calls for stronger procurement policies and more third party audits, the group called for MSC and other certifiers to work with labor groups to set standards in the U.S. and abroad.

The issues surrounding illegal fishing have also recently made their way to the White House, with the Obama administration assembling a taskforce on the topic and the State Department and Senate expressing more interest in related labor issues.

“These are all pointing in the right direction, but it’s going to require a lot of vigilance," Pinsky said.