Greenwashing still plagues the marketplace, with the vast majority of products that claim to be green -- more than 95 percent -- are actually stretching the truth in some way.

Yet despite the dismal statistics, there are also signs of optimism: Marketers are getting better at making truthful green claims and the number of products being accurately marketed as green is rising, according to the latest research from TerraChoice Environmental Marketing, the firm behind "The Sins of Greenwashing: Home and Family Edition."

"For three years in a row, we've found that greenwashing is a problem and a persistent problem, in that there is a lot of it around," said Scott McDougall, TerraChoice president and co-author of the report. "This year we have some good news to report: Consumers are clearly and literally changing the world for the better. They're demanding green products, and again this year we've seen the number of green products on offer go up dramatically." 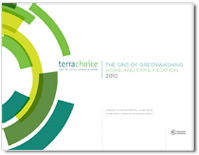 The firm found a 73 percent increase in the number of green products on the market this year compared to 2009. Of the 5,296 products evaluated by the firm, 4.5 percent were found to be "sin-free," meaning the products passed muster on a seven common greenwashing missteps, including the sins of the hidden trade-off, no proof, vagueness, irrelevance, lesser of two evils, fibbing, and worshipping false labels.

This compares to 2 percent of sin-free products in 2009, and just 1 percent in 2007, according to TerraChoice, which is a sister company to UL Environment and also administers Canada's EcoLogo certification program.

In certain product categories that have had green items for longer periods of time, such as office or construction and building buildings, the proportion of sin-free products was five times greater than more "immature" product categories, such as toys and baby products.

This year, the number of Bisphenol A (BPA) and phthalate claims sky-rocketed compared to last year, particularly for toys and baby products, where two-thirds of these claims appeared. BPA-related claims increased 577 percent, while products with phthalate-free claims grew a whopping 2,550 percent.

The two chemicals have made headlines in recent years. Canada has declared BPA, which mimics estrogen, to be a toxic substance over concerns of exposure for fetuses, infants and children. Phthalates can disrupt the endocrine system and cause birth defects.

For proof, companies could get certified through an existing standard in which BPA or phthalates are chemicals of concern. They could also seek third-party certification that confirms the absence of these chemicals, or even publish internal scientific documentation.

"We would say to companies, 'Something gave you the confidence to say it's BPA-free,'" McDougall said. "If nothing else, you should publish whatever stuff you have internally that gave you enough confidence to make that claim public."

Big Boxes as the Best Bet for Green Goods?

Interestingly, TerraChoice found that Big Box retailers may be consumers' best bet for finding green products because the number of greener products is larger than at boutique stores, the rate of greenwashing is lower, and the use of legitimate standards and certification is higher.

"We think it's true because they are so large and have such control over their supply chains," McDougall said. "Combined with the fact that they're very savvy organizations, they're very aware of the scrutiny that's being given to greenwashing, and they do not want to be found to be in trouble by that scrutiny. As you put those things together, they are able to control much more so than smaller retailers the way their suppliers behave."

In the past some have raised concerns of transparency because TerraChoice refuses to name specific companies or products. The firm steadfastly refuses to, pointing out there are plenty of advocacy groups better positioned to "name and shame."

"We've been careful not to name sinners or saints over the years because we think it's not our role," McDougall said. "There are regulators in this space. And since our real interest is in helping everyone get better together, we thought it would be distracting to name anybody individually."

There are also forums for consumers to rate products, including the EnviroMedia Greenwashing Index.

"When we're asked what's the consumer to do, our first answer is don't give up," McDougall said. "Even if there is greenwashing involved, it's important to keep supporting those products if that's still the best choice you have. Even supporting the company that is trying, even if there is greenwashing involved, it is obviously better than supporting those companies that aren't trying at all. Since most greenwashing is a case of exaggeration, not outright falsehood, than it's still likely you're getting a greener product, it's just likely not as green as it pretends to be."

The report is available for download from GreenBiz.com; more details, as well as an online reader, are available at SinsOfGreenwashing.org.

VERGE 21 features sessions specifically for startups and investors, including interactive breakouts and industry expert conversations. We are offering a 40% discount to startups. Please contact [email protected] for your 40% discount code.