In California’s famous water wars, who controls what water and where has been material for Hollywood movies.

But since 60 percent of the water used by agriculture and industry in this drought era is groundwater pumped up from deep aquifers, there’s growing realization that the state can’t rely on a Wild West approach of vigilante law for groundwater management.

Groundwater had gone largely unregulated in this state until passage of the Sustainable Groundwater Management Act of 2014. But most requirements of that law don’t kick in until 2040, so a growing number of farmers and agricultural scientists are trying a more immediate route to saving the state from going dry.

When El Nino storms unleashed heavy rains in California, some farmers in the Central Valley's southern edge began capturing storm water and diverting it to flood their fields and orchards in a plan to recharge aquifers underneath.

This so-called Groundwater Banking effort is being studied by agricultural academics at the University of California at Davis for its effectiveness and funded by the UC Cooperative Extension Division of Agriculture and Natural Resources.

The idea, according to UC Davis Hydrology Professor Helen Dahlke and her colleagues, is that the fields will serve as infiltration basins, allowing the storm water to seep through the soil and layers of gravel and rocks deep into the aquifers while hopefully not damaging plants.

And the effort is drawing lots of interest from farmers wanting to participate.

"We are getting an overwhelming number of calls from farmers" eager to participate, said UC Davis Hydrology Professor Graham Fogg, also working on the project.

"I’m seeing this sort of populist change in farmers and how they use water," he said. "They are realizing they’re not operating independently, but affecting each other and that they're in the same boat." Consequently they are more willing to do things collectively or have their groundwater use measured than ever before, he said.

“In the past, people pumping groundwater for irrigation didn’t have to think about it. They didn’t have to because there were no legal consequences to doing it and it didn’t affect neighbors,”  he continued.  But in 2014 and 2015 as wells started drying up and groundwater levels fell by 100 feet in some agricultural areas, farmers became more alarmed about the availability of groundwater and became more open to new practices and even new cooperation.

Even in normal times, groundwater supplies 30 to 40 percent of the state's water for agriculture, industry and residential needs.

But there's a caveat to the idea of letting fields act as filtrations for captured groundwater. Many fields are laden with nitrates and pesticides, which would then be passed into the groundwater. Some of the state's more shallow groundwater aquifers are already contaminated. So the scientists are studying where it makes the most sense to flood fields to recharge underlying aquifers.

Fogg and other hydrologists are working on a data project to pinpoint which basins are best suited for the agricultural recharge effort based on crops grown on the land and existing conditions of the groundwater.

Their Soil Suitability Index for Agricultural Groundwater Banking research led by Anthony O'Geen of the UC Cooperative Extension is identifying potential farmland suitable for groundwater banking.  In the map below, the best areas are represented in green and the worst in red. 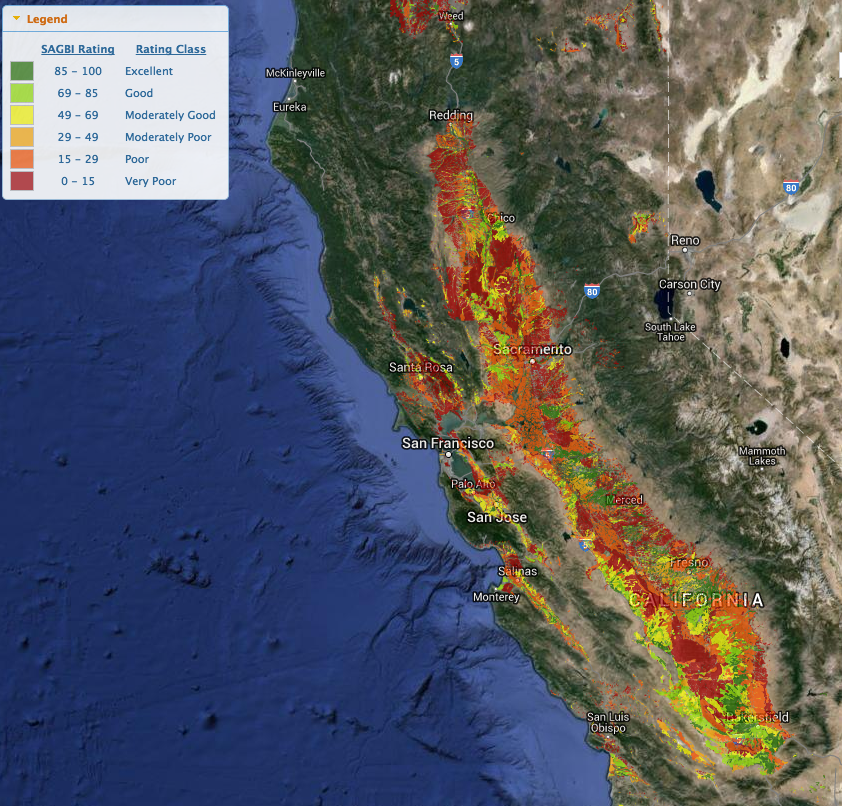 The team of hydrologists so far have determined there are 3.6 million acres of farmland with good potential for groundwater banking, based on how the soil could facilitate deep percolation of the water without harming the crop or contaminating the groundwater.

Farmers pumped nearly twice the amount of groundwater in the past year as they do in non-drought times, according to UC Cooperative Extension and several other sources.

The result is that groundwater tables fell as much as 100 feet in some areas, and essentially dried up in others. State water officials say that half a million acres of farmland was laid fallow because of water shortages due to drought. In certain farming communities in the southern Central Valley, residents experienced dry taps with no water coming through their faucets because the wells they depended on to bring up groundwater were used up.

In California's still simmering water wars, or disagreements over who should bear the brunt of water conservation, groundwater replenishment  has been identified as sorely needed. Water could simply run out.

Heather Cooley, water program director at the Pacific Institute and primary author of a new report "Where we Agree: Building Consensus on Solutions to California's Urban Water Challenges," on the status of water in California, said it will be years before anyone knows if the Sustainable Groundwater Management Act will be effective.

“It is still very early in the process. SGMAN was passed two years ago and it’s in the very early stages. We’re seeing groundwater management groups form,” which is the first step the new state law requires.

“People are starting to prepare their management plans, but the requirements don’t kick in in terms of achieving a more sustainable balance until 2040, so we are still quite a ways off in being able to evaluate how effective the changes will be.”

Still, in that the law provides the first major attempt for groundwater management, she and Fogg both described it as significant.

In its report, the Pacific Institute  identfied strategies for groundwater replenishment and storage of water as key to the state's water future and to drought resistance in any locale.

"California’s overdrafted aquifers provide significant water storage opportunities and could help the state respond to a changing climate, and particularly to reductions in snowpack due to warmer temperatures," the institute wrote in its Where We Agree report, published this month.

The consensus, Cooley indicated, is that the state make use of not only the Sustainable Groundwater Management Act but also of a water storage funding bond approved by California voters through proposition in 2014.

While that proposition was widely regarded as storage for surface water, the Pacific Institute said, "there is tremendous interest and opportunity in boosting groundwater recharge in California," and yet "there is no strategy so far to integrate these resources with one another, with surface reservoirs, or with the infrastructure needed to move water around."

El Nino rains have come to California, but a few rainy months can not reverse the impact of four years of drought.

“Rain helps but it doesn’t get us out of severe drought. We have a long large drought and will take it more than a year to pull us out,” Cooley said, particularly to recharge the depleted groundwater.

Not just farmers, but any water users in California are on the hook to conserve water and manage what and how it is used.

"There is a lot of opportunity for business to improve water management," Cooley said. "Things they can be doing in their direct operations to reduce water use and reusing water for processes. They also should be looking at water use in their supply chains and working with those situations to use water more effectively."