<p>Just two years after San Francisco's Green Taxi Law made it onto the books, alternative fuel vehicles make up more than half of the city's cab fleet.<br /> &nbsp;</p>

Almost two years ago to the day, I sponsored a Green Taxi Law requiring San Francisco cab companies to lower their greenhouse gas emissions 20 percent below 1990 levels by 2012. When I announced this goal many said it was unattainable.

We thought it was not only possible, but necessary to reduce our dependence on fossil fuels, clean our air and accelerate a new green economy.

I am pleased to announce that we are well on our way to exceeding this goal. The city's taxi fleet as of this morning is comprised of 55 percent alternative fuel vehicles, including hybrids and compressed natural gas vehicles. These fuel-efficient vehicles have reduced gas consumption by 2.9 million gallons per year and lowered greenhouse gas emissions by 35,000 tons annually. That's the equivalent of taking 4,700 passenger cars off the road.

And its good news for cab drivers too. Even though lower-emission cabs cost a little more to take out for a shift ($104.50 per 10 hour shift instead of $96.50 for a gas vehicle), cab drivers like them because they save money.

Driving a gasoline-powered cab for one shift, about 135 miles, costs a driver anywhere from $28 to $35 in fuel, while filling up a hybrid costs about half that around $15 per shift. The economics behind our environmental decision has made the transition to a green taxi fleet that much easier.

Cab companies also appreciate the operational benefits of alternative-fuel vehicles. San Francisco's hills are hard on taxis, the brakes in particular, and the hybrids save time and money on brake repair. For example, the brakes on a gasoline-powered Crown Victoria have to be changed every 7,000- 8,000 miles -- about once a month -- while the brakes on a hybrid can go about 50,000 miles and only have to be changed every six to eight months.

In 2004, San Francisco taxi industry leaders Yellow Cab and Luxor Cab were the first cab companies in the United States to adopt hybrid vehicles. Without their innovation and participation, the city's clean taxi policy might have faced more obstacles, or even failed.

In San Francisco, our stakeholders have worked together successfully and have proven that aggressive action is possible at the local level to make major reductions in carbon emissions. Our continued collaboration will help us meet our next goal -- the nation's first 100 percent green taxi fleet. 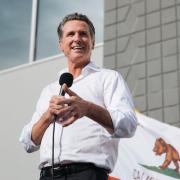