Hair-based oil mats may have got their prime time in the spotlight. Although we've covered the inventions several times over the last three years -- first during a 2007 oil spill in the San Francisco Bay, and then as part of a 2009 Earth Day event sponsored by Paul Mitchell, 2010 poses the biggest challenge yet for the products, created by nonprofit Matter of Trust in San Francisco.

With the Deepwater Horizon spill still oozing untold thousands of gallons of oil per day into the Gulf of Mexico, Matter of Trust is working overtime to collect as many clippings as possible and send new booms out to the Gulf region.

According to an NPR story that aired yesterday:

[Matter of Trust co-founder Lisa] Gautier says the BP spill is by far the biggest challenge she's encountered, so her organization is directing its current stockpile of hair — 400,000 pounds — toward the cleanup.

While the group does have lots of hair, Gautier notes, there is one shortage. "I knew that hair wouldn't be a problem, but nobody wears nylons anymore," she says. 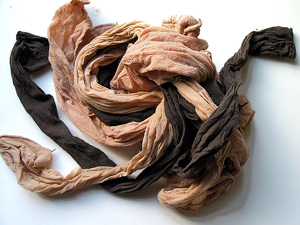 Cue the private sector: Hanesbrands today announced that it is donating 37,500 pairs of pantyhose to Matter of Trust as part of the effort to address the Deepwater Horizon oil spill.

Hanesbrands is also donating 12,500 pairs of pantyhose to the Sunshine and Shores Foundation, a Florida-based group also working on hair-based oil booms.

“We are collecting hair and pantyhose from throughout the country to make 1 million hair booms over the next three weeks,” Jeff Golden, vice president and co-founder of Sunshine and Shores, said in a statement. “Hair acts as a sponge. When you put these booms in oil-polluted water, they absorb the oil and leave the water crystal clear.” 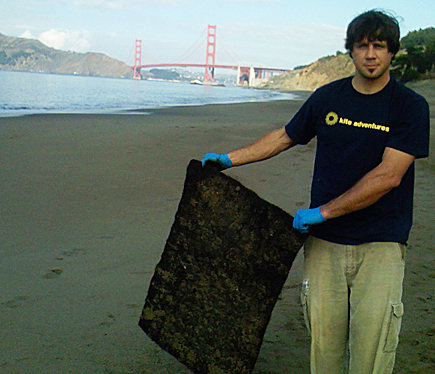