Talk of building energy-efficiency retrofits usually focuses on commercial offices. But there’s another type of building—prisons—where the non-energy benefits of those retrofits really stand out in stark relief. True to their name, deep energy retrofits generate a suite of deep retrofit values that are quantifiable and go well beyond straightforward energy cost savings, such as rents, sales and lease-up rates, employee health and productivity and more.

In office environments, the beyond-energy-cost value-add of deep retrofits is subtler, but prisons are a world of extreme contrasts where we can more plainly see the impact of deep retrofit value.

Like energy-intensive building types such as healthcare facilities and food service establishments, prisons consume higher-than-average amounts of energy per square foot. Retail stores use an average 114 kBtu per square foot, the average office building uses 148 and your average prison uses about 170. And, of course, many prisons aren’t exactly designed with occupant comfort in mind.

But the prisons that are overhauled for energy efficiency and other so-called “green” features are becoming a powerful demonstration of the difference between doing hard time and doing rehabilitative time. That difference, in a very real sense, is the deep retrofit value about which we’ve written before.

Correctional facilities costing taxpayers an estimated $63.4 billion a year. And a 2010 study showed that the average prison spends $36,000 per month on energy. Prisons have historically been built with security in mind, and not much thought put into efficient lighting, heating or cooling. But that is starting to change.

In 2008, the California Department of Corrections and Rehabilitation saved over $3 million through energy retrofits of 13 of the state’s prisons. The retrofits included lighting, HVAC, kitchen equipment and laundry upgrades. Coyote Ridge Prison in Connell, Wash., the first correctional facility to achieve LEED Gold certification, uses energy-efficient boilers, natural ventilation and passive heating, cutting its energy usage in half.

Constellation Energy was recently awarded a $45 million contract to implement energy-efficiency measures and install a 2 megawatt (MW) solar system at a Federal Correctional Complex in Florida. The project is expected to save the Federal Bureau of Prisons $79 million in energy costs and 323,000 tons of carbon dioxide emissions over the next 19 years.

Realizing the human side of green building

Yet saving money isn’t the only reason to build or retrofit prisons to be environmentally friendly. Just as RMI has shown in other commercial properties, “greening” up prisons provides value beyond energy cost savings alone. Studies have shown that inmates with views of natural settings had lower health complaints and fewer stress-related physical symptoms than inmates without natural views. Introducing daylight into prisons has been shown to not only save on lighting costs, but to also create a humane environment that can reduce aggressiveness. 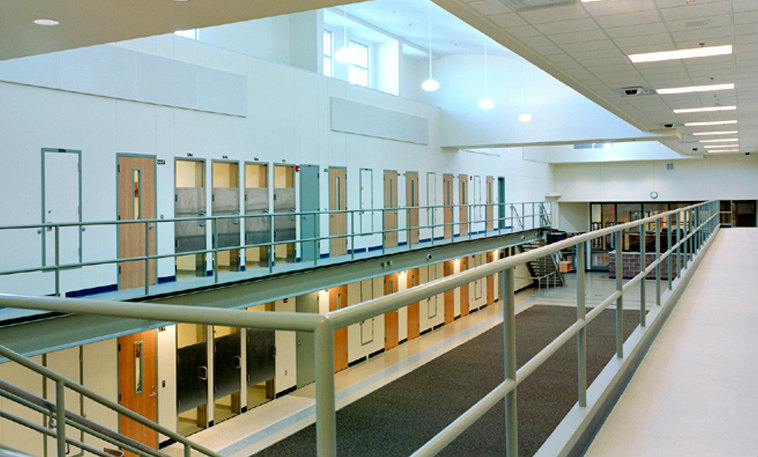 “When we decide people are less than human, and design as though they are less than human, we don’t give them much of a chance for improving themselves as human beings,” wrote Melania Baumhover, project manager for BWBR. “It’s not about thicker walls, more steel, and more isolated rooms. It means designing spaces that are light filled and open.”

A U.S. Department of Justice report describing the benefits of greening prisons states, “Facilities designed for the incarcerated should be planned and designed with outcomes in mind. While materials and treatments will differ from mainstream buildings because of budget and security, the same care for scale, humane materials, healthy environment, and all of the metrics of energy efficiency should apply in equal measure.”

One of the best examples of gaining value beyond energy cost savings is seen in Norway’s minimum-security Bastoy prison, often called the first ecological prison in the world. Bastoy is powered by solar panels, heated by burning local wood waste, grows all its own food using organic fertilizers and biofuel-powered tractors and recycles everything it can. It also has the lowest operating costs of any prison in Norway and a lower recidivism rate.

Incorporating energy-efficient technologies and renewable energy systems into prisons can also help bring about green job training opportunities. While many prisons have long offered education and vocational training programs, the growth of the green economy is opening new opportunities. Many prisons have large amounts of land in which solar panels or wind turbines can be installed.

For example, the Ross Correctional Institution in Ohio has a 400-panel solar thermal system that saves taxpayers $245,000 in energy costs a year. But perhaps even more important, the inmates installed the system themselves after a rigorous training program. One of the inmate installers was offered a job by the installation company after he got out of prison.

The Virginia Department of Corrections has worked with Johnson Controls to retrofit over 20 correctional facilities with lighting and HVAC upgrades. Besides saving energy and money, it is using the systems to run a Green HVAC Vocational Program.

"Through educational programs like this we can improve public safety and reduce recidivism by providing offenders with marketable skills for when they are released back into their communities," Marla Graff Decker, secretary of public safety, stated in a press release about the program.

Greening up prisons is a win-win-win situation for taxpayers, the environment, and society at large, not to mention the inmates themselves and others who spend significant amounts of time within the walls of a facility. Morris Thigpen, director of the National Institute of Corrections, wrote in The Greening of Corrections, “We believe the path to sustainability is not only technically feasible for correctional facilities but also critical as it allows us to reduce our costs of doing business, assist in making our communities more sustainable, help our inmates reintegrate into society in a productive and meaningful way, and ultimately, ensure that we are preserving our environment now and for generations to come.”

In the end, as much as they save energy and cost, deep energy retrofits are as much or more about the people that occupy a space, than they are about the energy that space consumes. Nowhere is that distinction more apparent than in the prison system, but lessons from there can translate across to offices, homes and numerous other buildings, where we can see the great value that deep energy retrofits generate.