Has Ceres overcome its midlife crisis?

Has Ceres overcome its midlife crisis?

Last year Ceres celebrated its 25th anniversary. That’s laudatory and during those years the nonprofit was responsible for some profound changes in the business community. It helped create the Global Reporting Initiative that most large corporations now use as the foundation for sustainability reporting. It helped influence the SEC to require firms to publically state potential risks as a result of climate change.

Since its inception, the NGO has actively engaged the investor community, governments, and corporations, pushing for change.

But during the last few years, I’ve walked away from the annual Ceres conference wondering if there was any reason to sign up for the following year. On the one hand, the message was doom-and-gloom and hair-on-fire pronouncements, with the appropriate tsk-tsking from the audience. At the same time, way too much kumbaya and not enough critical eye.

Recent studies have noted that over the last 50 years the average lifespan of S&P 500 companies has shrunk from around 60 years to closer to 18. From some of my conversations with business leaders over the past couple years; I was starting to wonder if Ceres at 25 might be feeling its mortality.

As I walked from the Powell Street BART stop to the Fairmont Hotel, where this year’s conference was held, I questioned my own mortality during the last uphill blocks. I also questioned my judgment in attending a conference that seemed to have run its course.

Instead, I walked into an event that seemed rejuvenated and energized.

During the kickoff of past Ceres events, I’ve felt horrible for the recipients of the Joan Bavaria Award. In years past, the award would be presented and a speech attempted midway through the opening cocktail reception — a challenge only slightly more difficult than having a conversation at a Fugazi show.

This year, the seventh-annual Joan Bavaria Award for Building Sustainability into the Capital Markets was presented at lunch to Geeta Aiyer, Founder and President of Boston Common Asset Management. In what may have been a Ceres conference first, we had the pleasure of hearing her acceptance speech.

Prior to lunch, Aiyer moderated a panel discussing the alignment of investor expectations and corporate sustainability. Instead of calls for integrated reporting and citations of the trillions of dollars of responsible capital, we got Ford’s very funny Tom Nieman expressing his exasperations at the streets failure to connect the dots when it came to Ford’s sustainability successes that helped create economic success as well.

And from Prudential’s Chris Rowe we got a plea to stop thinking about sustainability investing versus regular investing and just talk about investing. 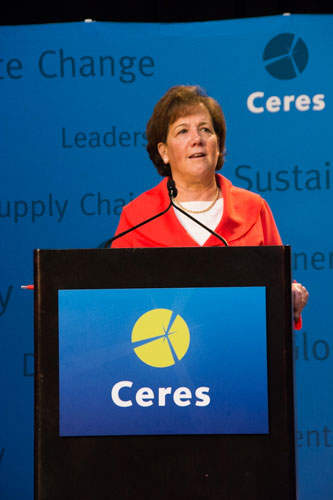 Ceres
</p><p></p><p></p><p></p><p>Ceres president Mindy Lubber addresses the conference.</p>
During another panel, focused on board oversight and sustainability performance, we got to hear a grounded and realistic conversation about the different options that companies might pursue. This was no academic, ivory-tower discussion where attendees file out wishing they had board embers like that. Instead, panelists highlighted that there is no one best practice for embedding environmental, social, and governance (ESG) issues at the board level.

A former Men’s Wearhouse board member shared that the directors went from a dedicated ESG committee to embedding it into the full board and then back to a dedicated committee while still not sure what the right structure should be.

In a report coming later this year, Ceres will elaborate on this theme and share practical advice for addressing sustainability issues at the board level.

Financing the supply side

The biggest difference for me this year at the Ceres conference was the organizers’ ability to get the right message on stage.

No one better exemplifies this strategy than Michael Kobori, Levi Strauss & Company’s vice president of sustainability. He kicked off the supply-chain panel lamenting 20 years of supply-chain models focused on compliance and policing with disincentives that communicate to suppliers if you don’t “do,” you don’t “get.” This model creates a lack of trust, is typically duplicative of efforts by others contracting from the same partners, and provides no incentive for suppliers to go beyond compliance.

Kobori brought along Farzin Mirmotahari, senior operations officer from the International Finance Corporation (IFC). Levi’s and IFC have created a global trade finance program where the vendors who score better on Levi’s supplier scorecard get access to lower interest rates on loans, an incentive that can save the suppliers anywhere from $10,000 to $100,000 per year. Launched in December, six vendors already have qualified.

Both Rubbo and Kobori stressed that companies can’t take advantage of bad governments. For their part, Disney decided to not be in 44 countries around the world, including Bangladesh.

While Levi’s is in Bangladesh, it works with only 12 factories out of thousands because those are the only ones that can meet its standards. Kobori stressed the need to step up as global companies and take accountability for where they source production.

That’s not a zero in the subhead above. It represents both a closed-loop circle as well as the 15th letter of the alphabet.

In her opening keynote, Dame Ellen MacArthur spoke about how her foundation is working to accelerate the transition to the circular economy. Many of the examples cited when people talk about the circular economy are not necessarily new and, in fact, existed before the phrase gained currency.

Still, it’s a critical re-framing of how corporations should be thinking about their business and has the potential to cause executives to look outside the box at new opportunities.

Keeping clothes out of landfill is one way to look at recycling. But Levi’s Kobori sees harvesting jeans from people’s closets as a way to free up cropland. That’s a very different discussion.

Re-framing was a recurrent theme at Ceres.  My guess is that you couldn’t attend a session without hearing the word “opportunity.” There was little handwringing and few unrealistic discussions about “getting to 350” (let’s face it, we’re already at 400 parts per million of carbon dioxide, and the gas sticks around).

There was a generally positive vibe that the issues Ceres was formed to address can be solved. At the end of the event, Mindy Lubber summed it up another O-word: optimism.

The Quest for Clean Supply Chains

CEOs of leading sustainability nonprofits to speak at GreenBiz Forum

Lessons from Ceres: How to expand corporate leadership