As Puerto Rico seeks to repair its decimated electricity system, experts are proposing ways the island can rebuild using better, stronger and cleaner technology that would cut costs, boost resilience and reduce reliance on oil to generate power.

But many challenges stand in the way. For example, who will pay for the projects? Who will decide what gets built? And how will it all be financed?

It’s hard to overstate the devastation of Puerto Rico’s power system. Hurricanes Irma and Maria in September destroyed transmission and distribution power lines that criss-cross every part of the island. High winds and flooding from rain and storm surges knocked down trees and damaged substations, power plants and distribution facilities.

Three months after the hurricanes, more than one-third of Puerto Rico was still without power (PDF), according to the Energy Department. 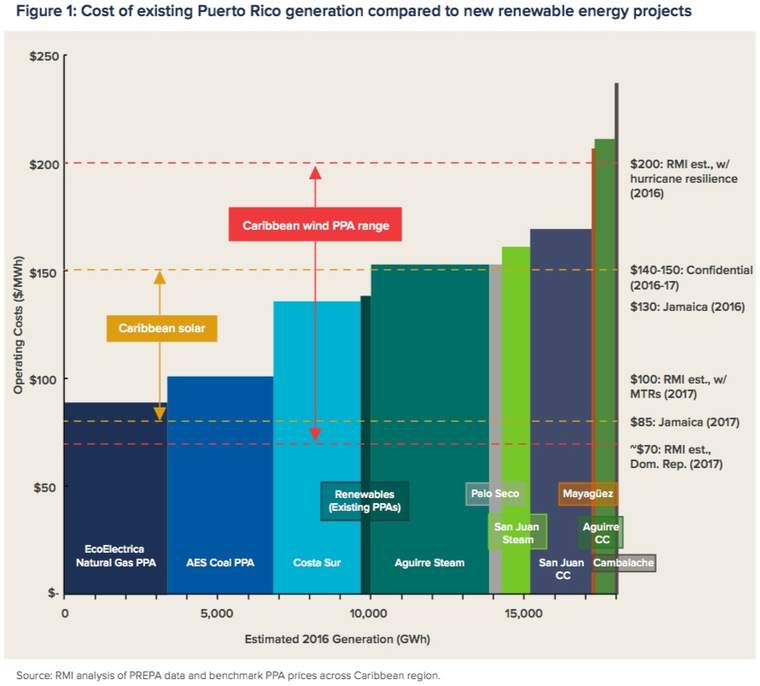 The price tag is an estimated $17.6 billion, according to the report.

If it can be done, Puerto Rico could emerge better and stronger. It’s unclear, however, where the money will come from.

The governor of Puerto Rico, a U.S. territory, has asked the federal government for $94.4 billion in aid, of which about one-fifth would be spent on rebuilding the electric grid.

Federal lawmakers are considering an aid package of $81 billion, which Puerto Rico would have to share with Texas and Florida, which also incurred damage from the hurricanes, as well as California, hit hard by multiple wildfires.

By itself, Puerto Rico has little buying power. The island has been in an economic downturn for several years and struggled under $72 billion of debt even before the hurricanes.

PREPA, the island’s monopoly utility, filed for bankruptcy in July after it was unable to restructure $9 billion of debt. The utility’s financial troubles have made it difficult to obtain financing to pay for improvements and new projects, such as solar farms.

Adding to the island’s troubles, hundreds of thousands of residents have left since the hurricanes, bringing their pocketbooks with them. More than 269,000 people have landed at airports in Miami, Tampa and Orlando from Puerto Rico since Oct. 3, according to the Florida Division of Emergency Management.

Adding to Puerto Rico’s woes, the tax bill that Republican lawmakers in Washington passed in December requires businesses that operate on the island to pay a new tax.

Previously, companies in Puerto Rico paid no federal tax on patents or licenses because of the island’s quasi foreign status, but they could label their products as made in the U.S. The tax bill requires Puerto Rico companies to pay the same tax on intellectual property as companies in foreign countries, as much as 12.5 percent, according to Puerto Rico Gov. Ricardo Rossello.

Puerto Rico could navigate through all this. But the island will have to streamline regulations that currently hold back renewable energy development, such as requiring solar panels to be paired with batteries, said Bruce Levy, chief executive of BMR Energy, a Caribbean renewable energy developer owned by Richard Branson’s Virgin Group.

"Folks in my industry are hoping this is the catalyst that wakes them up," Levy said. "Use more renewable energy, shut down inefficient plants and take out battery requirements to take the price down."

Folks in my industry are hoping this is the catalyst that wakes them up.

Several funding organizations and other groups have stepped up to help Puerto Rico.

The Rockefeller Foundation, Ford Foundation and Open Society Foundations are supporting a Puerto Rican-led effort to rebuild the island to be physically, socially and economically resilient.

New energy technologies, such as solar and wind farms, microgrids, energy storage, demand flexibility and energy efficiency are cost effective for Puerto Rico, as they are elsewhere, said Isaac Toussie, a senior associate at the Rocky Mountain Institute. However, some people have misconceptions about these technologies: that they are expensive; that they are not resilient or reliable; and that they don’t have a role in the short term or long term of Puerto Rico’s rebuilding effort, he added.

"Wind and solar, in particular, have come down a dramatic amount in price over the past decade," not just on the U.S. mainland, but in the Caribbean as well, he said. "Renewables can play a major role in bringing down the cost of power on the island."

Renewables can play a major role in bringing down the cost of power on the island.

Global prices for solar and wind power have decreased by 86 percent and 67 percent, respectively, since 2009, and solar and wind prices in the Caribbean are cost-competitive with existing fossil fuel-based generation in Puerto Rico, according to a December report that Toussie co-authored.

We can achieve an energy reset in Puerto Rico

Powering Puerto Rico back to life, with PRIDE