Need more data to make your company’s case for fighting climate change? You’ll have plenty more ammunition by the end of this week.

The Global Climate Action Summit (GCAS) in San Francisco — and more than 350 affiliate events connected to what’s being described as an unprecedented gathering of businesses, cities, NGOs and other "nonstate actors" supporting the transition to a clean economy — has inspired the publication of dozens of new economic prognostications, deep-dive analyses and take-action handbooks.

Here are just a few predictions and prescriptions that will frame discussions and strategies in the days and months ahead.

The time is right for policy leadership (that includes businesses)

Three in four Americans believe the federal government, state officials, cities, companies and average citizens have a responsibility to address climate change, according to a poll of 1,779 registered voters (PDF) fielded in early September by Nexus Polling, the Yale Program on Climate Change Communication and the George Mason Center for Climate Change Communication.

Americans want their governors, mayors and business leaders to pick up the torch.

About 80 percent of the respondents were in favor of their state's replacing fossil fuel-generated electricity with renewable sources such as solar and wind power, while about 75 percent were in favor of rebates and incentives intended to drive adoption of cleaner transportation alternatives.

"What is interesting about this poll is that Americans are looking to new leaders to rise to the challenge," said Anthony Leiserowitz, director of the Yale program, in a statement. "The federal government is no longer offering solutions. Americans want their governors, mayors and business leaders to pick up the torch."

So far, at least, very few companies are actively lobbying in support of better climate policies, according to ongoing analysis by InfluenceMap, a U.K. think tank. 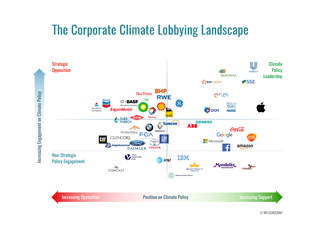 In fact, its updated study of 200 of the world’s largest industrial companies found that 90 percent retain ties to industry associations that are "actively opposing" leadership on matters such as renewable energy regulations, emissions controls and legislation that supports climate action. Among those playing a leadership role: Unilever, Apple, DSM, Nestle and General Electric. (See the chart above.)

A report out this week by America’s Pledge, the group co-chaired by United Nations special envoy on climate change Michael Bloomberg and California Gov. Jerry Brown (two of the big-name GCAS organizers), suggests "10 Climate Action Strategies" to accelerate action — helping to reduce emissions to 21 percent below 2005 levels by 2025. Here’s a summary:

The report offers this hopeful outlook:

Even the most ambitious scenario modeled here focuses on what can plausibly be achieved through state, city, and business actions, prior to federal reengagement, taking into consideration limitations, including legal barriers to scaling specific policies and the political unwillingness of local government in certain regions of the United States to take up climate policies. 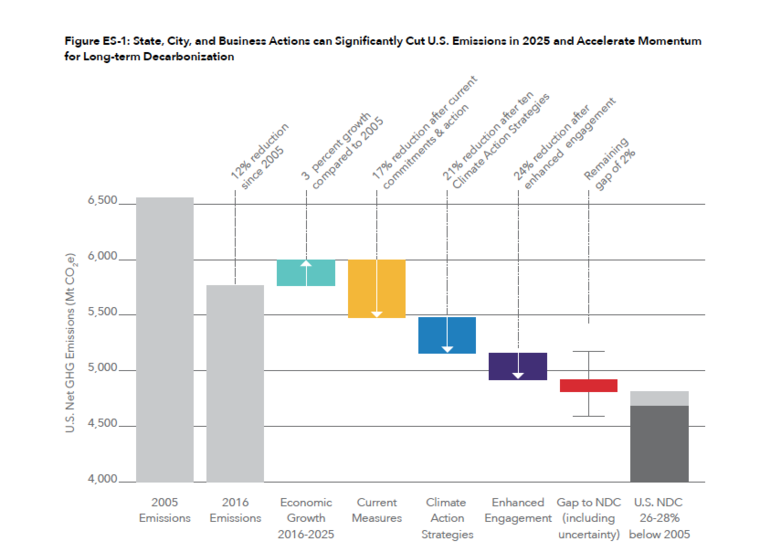 Historical data is from U.S. Environmental Protection Agency; projections are based on modeling by America's Pledge.

The convincing case for a price on carbon

The Climate Leadership Council — a bipartisan group of former policymakers and business leaders including former Secretary of State George Shultz and former Walmart Chairman Rob Walton, which supports what it calls a "carbon dividends" approach to pricing CO2 emissions — has released a new economic report (PDF) analyzing the potential impact of its plan. (The framework originally was authored by Shultz, who served under President Ronald Reagan, and former Treasury Secretary James Baker, who served under Reagan and George H.W. Bush.)

The basic premise of what has become known as the Baker-Shultz proposal is to set a price on carbon that starts at $40 per ton and rises over time, with the "returns" going back to American families. While models suggest that carbon reduction policies set during the Obama administration would reduce emissions by 2025, the Climate Leadership Council stands behind the idea that its plan would bring reductions of 32 percent — a far steeper curve.

"[The plan's] effectiveness in reducing emissions justifies the phaseout of other carbon regulations that are far more intrusive," they wrote. "This provides a major draw for businesses. The plan’s reliance on a market-based carbon tax also makes it — in the view of economists of all stripes — the most cost-effective solution." 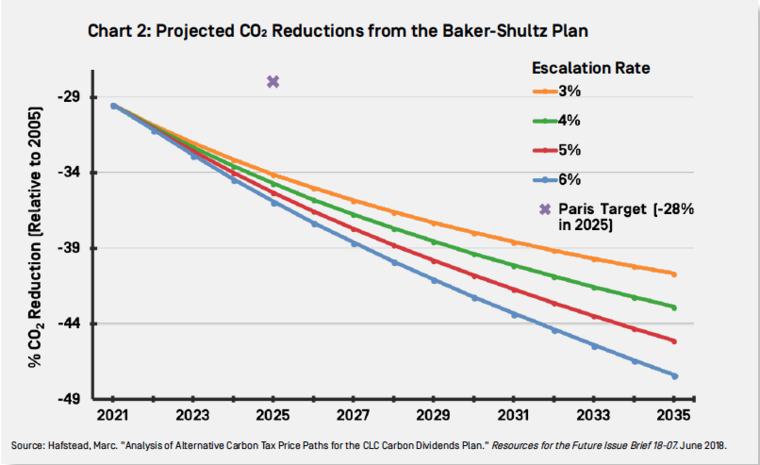 For a broader discussion of the "carbon productivity" principle along with examples of companies taking action, check out a new white paper, "Our Carbon Future (PDF)" penned by Volans (the think tank cofounded by GreenBiz Editor at Large John Elkington). The discussion centers on these three ideas:

For every industry threatened by corporate initiatives that address global warming, a new sector is waiting to emerge.

Unlocking that potential could bring $26 trillion into the world’s economy by 2030 — creating 65 million new low-carbon jobs, preventing more than 700,000 premature deaths and generating an estimated $2.8 trillion in new government revenue via subsidy reform and carbon pricing. So proclaims the latest report from the Global Commission on the Economy and Climate, a group co-chaired by renowned economist Lord Nicholas Stern, Unilever CEO Paul Polman and Ngozi Okonjo-Iweala, former finance minister of Nigeria. (This is the fourth report in a series released by the organization.)

The catch? Time’s a wastin’ and much needs to be done within the next 15 years in order to have a positive effect, according to the analysis.

"The momentum from businesses, states, cities, investors and citizens is now unstoppable, not least because those taking bold climate action are already seeing tangible benefits," Polman said. "But if we are to unlock the full benefits of this new low-carbon growth opportunity and avoid runaway climate change, economic and financial leaders in both government and the private sector need to do even more, and fast."

Among the specific suggestions the commission makes:

Do actions like this really have an impact, you wonder?

If we are to unlock the full benefits of this new low-carbon growth opportunity and avoid runaway climate change, economic and financial leaders ... need to do even more, and fast.

For perspective and a little inspiration, read the latest edition of the California Green Innovation Index, produced annually for the last decade. In the past 10 years, since California adopted its first climate policies, emissions have fallen by 11 percent while the state’s economy has expanded by about 16 percent, according to educational organization Next 10 and researcher Beacon Economics, which produced the data.

That result was slightly better than for the United States as a whole: Across the nation, emissions decreased by 10.2 percent in the same time period, while the economy grew 11.6 percent.

"But progress doesn’t always follow a straight line," said Adam Fowler, director of research at Beacon. "Both California and the U.S. have experienced dips in VC investment and a decline in patent generation in the past year, while some of our major economic competitors have seen increases. Command of clean technology markets may well determine economic success in the 21st century, so it’s not a time to slow down."

Another cause for concern: the transportation sector, which accounted for 40.5 percent of the state’s greenhouse gas (GHG) emissions in 2016. That’s the highest percentage since 2006, according to the index.

"California has been investing in solving that challenge for years — building a strong industry around clean transportation that could command the worldwide transportation market," noted Noel Perry, founder of Next 10. "The question is whether the federal government gets in the way. Federal challenges to California’s authority to set vehicle emissions standards pose not just an emissions risk, but an economic risk as well."

It’s an oft-reported statistic: Cities account for almost three-quarters of global GHG emissions, which makes them an obvious and urgent focus for new policies meant to address climate change.

Those actions could affect vulnerable populations very directly, according to a research released this week by C40 Cities in collaboration with the Global Covenant of Mayors for Climate & Energy and the NewClimate Institute. Between now and 2030, energy efficiency programs and policies to adopt renewable energy for district-level heating and cooling could result in 13.7 million new jobs and prevent 1.3 million "premature" deaths annually, the report predicts.

"By demonstrating that these measures will also create green jobs, save lives and cut consumer energy bills, we are making it even easier for mayors, policymakers and citizens to embrace the pace and scale of action needed," said Mark Watts, executive director of C40 Cities, in a statement.

Demand for fossil fuels will peak during the 2020s — probably around 2023 — which should be a wake-up call for financial institutions, corporations and "petro-states" that have failed to prepare for the ongoing transition to renewable generation sources such as solar and wind.

That projection is part of new data issued Monday by the Carbon Tracker Initiative. Its report notes that with global energy demand forecast to grow by 1 to 1.5 percent annually, and solar- and wind-generated electricity capacity growing by 15 to 20 percent per year, demand for fossil fuels likely will peak between 2020 and 2017. That means as much as $25 trillion in infrastructure could be at risk, which could rattle equity indexes and debt markets. 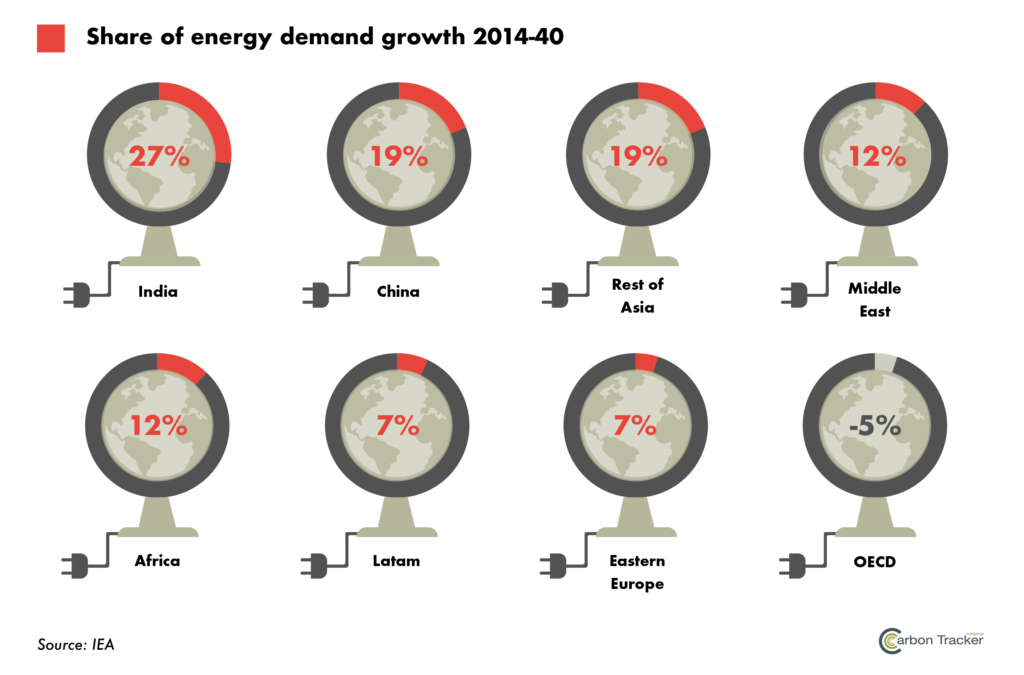 Aside from the oil and gas industry, the companies that pose the most risk during the transition are legacy players in banking, capital goods, transport and the automotive sectors, according to the Carbon Tracker report. Countries that rely heavily on fossil fuels exports, such as Russia, could see their economic foundations undermined, the data suggests.

The report’s author Kingsmill Bond, new energy strategist for Carbon Tracker, noted in a statement: "We believe that investors will start to react faster as the energy transition works its way through the world’s capital markets. As each sector is impacted, it becomes easier for the market to anticipate something similar happening to the next sector."

Institutional investors — led by insurance companies, pension funds and sovereign wealth funds — are already taking action to move away from fossil fuels. A separate report Monday by Arabella Advisors (PDF) calculates the aggregate impact of fossil-fuels divestment campaigns (so far) at $6.24 trillion, up from just $52 billion four years ago. This year, Ireland became the largest country to make a divestment commitment.

Incidentally, for an inside view on how insurance companies are refocusing their money, check out this new report on climate risks just released by the California Department of Insurance, along with the U.C. Berkeley School of Law’s Center for Law, Energy & Environment.

California is the largest U.S. market for insurance. insurers have so far divested $4 billion from fossil fuels interests. That money is flowing, instead, into renewable energy and into encouraging the construction of buildings that are more disaster-resilient.

Not sure how to get started? For some ideas on how to kickstart stakeholder engagement, shareholder advocacy organization As You Sow has published a new guide ("2020: A Clear Vision for Paris Compliant Shareholder Engagement") that summarizes the campaigns behind more than 150 shareholder resolutions filed with two dozen oil and gas companies.

Finally, here are some ideas for accelerating carbon removal

When you get home, you’ll want to peek at new reports published by the Rocky Mountain Institute (RMI) and the World Resources Institute. They include:

With the right guiding principles, carbon taxes can work