One cornerstone of Hewlett Packard Enterprise’s sustainability strategy, albeit somewhat self-serving, centers on encouraging the use of information technology for "social good."

The high-tech giant’s specific goal is to "improve" the lives of 1 million people by 2020, and it remains as committed to sustainability as ever, after a corporate breakup in 2015. But it certainly doesn’t expect to do this alone.

That’s where the company’s Living Progress Challenge, which debuted in December, comes in. The goal of the contest was to find mobile apps and web services that could advance human rights, environmental causes, financial inclusion and health care in emerging economies.

It turns out many, many organizations are willing to pitch in — HPE received almost 500 proposals before its deadline earlier this year.

During a live event in early August at the historic, now-tech-savvy Brooklyn Navy Yard, 10 of the entrepreneurs and organizations behind those ideas were given the opportunity to pitch prototypes of their concepts for a group of five judges. The prize: 12 weeks of free software development and project management services to develop their ideas. (The winning teams are also receiving cash along the way.)

At the end of the pitch day, four teams competing for those resources convinced HPE’s judging panel that they deserved more resources and the change to turn their ideas into reality. Here’s a list of the winning ideas:

All for Good (Points of Light)

The focus of this "social discovery" site is helping individuals find volunteering opportunities that appeal to their personal interests. It uses algorithms to "recommend" causes based on what someone has done in the past or what their friends might be doing, much like Amazon uses information about past purchase to guide shopping recommendations.

Members also can suggest causes to their connections. Companies might offer the platform as a way to help guide their employees’ choices. "The sun never sets on the opportunity to do good in your community," said the organization’s chief digital officer, Tony Chalberg.

A web data service intended to help governments and commercial fishing operations address the "immense amounts of fish that are stolen from the ocean each year." Much of this data is available, but not in a format that's easy to digest, according to Michele Kuric, WWF's vice president of ocean policy. Detect IT helps identify species in danger of poaching more quickly, she said.

Developed by one of the company's business process improvement teams in Mexico, the service matches 10th grade high school and college students with mentors who are selected based on their educational goals and interests. (The mentors don’t have to be in the same geographic as the mentees.)

It’s set up as a social network, with built-in messaging. The initial pilot involved more than 250 students, but the HPE team is pitching the tool as a way for companies to help their employees "transmit knowledge" more easily. 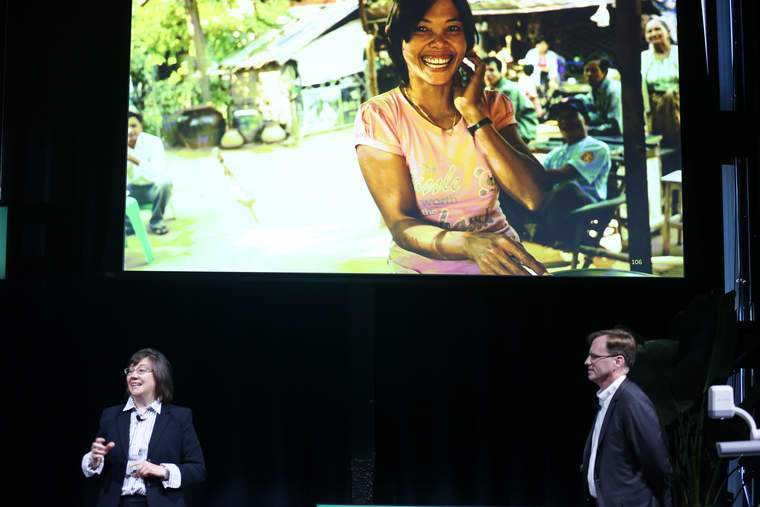 Hewlett Packard Enterprise
<p><span>The Pact team pitches Worth, a mobile app that will support informal loans by communities of women in places such as Kenya.</span></p>

Carrie Keju, a senior director for international development with the organization Pact, gets choked up when discussing the early feedback from the women using a prototype of its software. "It’s like putting a community bank inside of an app," she said.

The idea is to support women in places such as Kenya who have come together to invest in entrepreneurial ventures in their community. The women contribute money to a loan pool and receive "dividends" over time, depending on how much they have fronted. When the pool hits a certain level, it can be invested in a local bank. Right now, this process is handled on paper.

The Living Progress Challenge schedule calls for all four teams to have their services available more broadly by October, with progress reports due roughly 18 months later in March 2018.

What HPE wants the Internet of Things to learn from people