<p>The chocolate company is joining the many firms that are building landfill-free property portfolios.</p>

General Motors has nearly 80 landfill-free manufacturing facilities, Kraft has 36, and now the Hershey Company is building a portfolio of zero-waste-to-landfill sites.

As of this month, the company has four zero-waste facilities in Pennsylvania.

Three are chocolate plants: The site in Hazelton reached its zero-waste goal last week; the firm's West Hershey factory became zero waste in 2011; and the Reese's plant in Hershey achieved zero waste in 2010.

The Hershey's Chocolate World Attraction also attained zero waste status in 2010. The site is a visitors' center, rather than a plant, but has several features whose waste is diverted from landfills. There's a restaurant, a store, and an area where visitors can order up and help make customized candy bars. 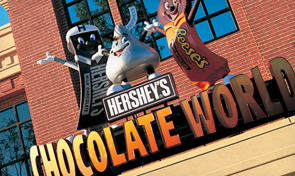 The zero-waste strategy at the three plants has prevented more than 1 million tons of material from going to landfills, company spokesman Jeff Beckman told me. Ninety percent of the waste from plant operations is recycled, he said. The rest is food waste, which is taken to nearby waste-to-energy incinerators to produce power.

The company has exceeded its first zero-waste goal, which was laid out in Hershey's 2009 sustainability report: Achieve zero-waste-to-landfill at at least one manufacturing plant by 2012.

"We're not stopping there," Beckman said. The company, which has eight manufacturing facilities in the continental United States, has not publicly set its next target but is pursuing zero-waste goals at other sites, he added.

An expansion of the West Hershey plant is on track to start landfill-free operations later this year when construction is complete. Estimated at as much as $225 million, the project is being conducted as zero-waste construction, meaning all leftover material and debris generated during the course of building is diverted.