Hiding in plain sight: The carbon cost of everyday products

The targets set in the Paris Agreement on climate change are ambitious but necessary. Failure to meet them will lead to widespread drought, disease and desperation in some of the world’s poorest regions. Under such conditions, mass migration by stranded climate refugees is almost inevitable.

Yet if richer nations are to be serious in their commitment to the Paris target, then they must begin to account for the carbon emissions contained within products they import.

Heavy industry and the constant demand for consumer goods are key contributors to climate change. In fact, 30 percent of global greenhouse gas emissions (PDF) are produced through the process of converting metal ores and fossil fuels into the cars, washing machines and electronic devices that help prop up the economy and make life a little more comfortable.

Thirty percent of global greenhouse gas emissions are produced through the process of converting metal ores and fossil fuels into cars, washing machines and electronic devices.

As one might expect, the wealthier parts of the world with their higher purchasing power do more than their fair share of consuming and polluting. For every item bought or sold there is a rise in GDP, and with each 1 percent increase in GDP there is a corresponding 0.5 to 0.7 percent rise in carbon emissions. The growing demand for day-to-day conveniences exacerbates this problem. For metal ores alone, the extraction rate more than doubled between 1980 and 2008 (PDF), and it shows no sign of slowing. 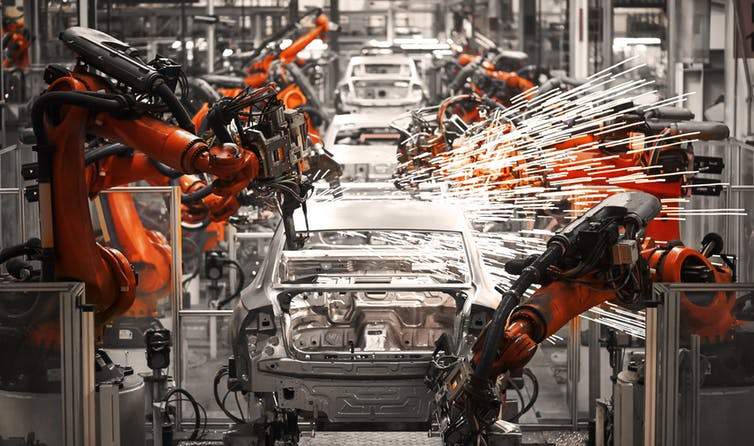 Every time you buy a new car, for instance, you effectively mine 3-7 grams of "platinum group metals" to coat the catalytic converter. The six elements in the platinum group have the greatest environmental impact of all metals, and producing just one kilo requires the emission of thousands of kilos of carbon dioxide.

That car also consumes one tonne of steel and you can add to that some aluminum, a whole host of plastics and, in the case of electric cars, rare earth elements.

Often, no one is held accountable for the carbon emissions connected to these materials, because they are produced in countries where "dirty" industry is still politically acceptable or seen as the only way to escape poverty. In fact, of the carbon emissions that European consumers are personally responsible for, around 22 percent (PDF) are allocated elsewhere under conventional carbon accounting practices. For consumers in the U.S., the figure is around 15 percent.

From mine to dump

Carbon emissions from the exhaust pipe tell only part of the story. To get a full sense of the carbon footprint of a car, you have to consider those emissions that go into producing the raw materials and digging a hole in the ground twice – once to extract the metals contained in the car, once to dump them when they no longer can be recycled.

Buying a new car and dumping the old one might be justifiable if the change was made because the new vehicle is more fuel efficient, but it is certainly not when it’s a question of personal taste or corporate-level planned obsolescence.

Buying a new car and dumping the old one is certainly not justifiable when it’s a question of personal taste or corporate-level planned obsolescence.

The same is true for any number of high tech items, including smartphones that run on software that renders them unusable in the medium term. The environmental consequences of replacing a smartphone, in terms of carbon emissions alone, are considerable. Apple found that 83 percent of the carbon dioxide associated with the iPhone X was directly linked to manufacture, shipping and recycling. With these kinds of figures, it is hard to argue a sustainable case for upgrades — regardless of how many solar panels Apple sticks on the roof of its offices.

Governments of richer countries that import products but not their emissions must stop pointing the finger at China or other manufacturing or mining giants and start taking responsibility. This means going further than they have been willing to go so far, and implementing sustainable material strategies that address a product’s entire lifecycle from mining to manufacturing, use and eventually to disposal.

On an individual level, people must vote with their money. It’s time to leave behind the laggards who hide the cost of the carbon contained within their products and who design them to fail in order to put profits before people and the environment.