High-Rise Buildings Could Use Toilets to Generate Electricity

A system for generating small quantities of electricity from waste water has been suggested by Tom Broadbent, a graduating industrial design student at Leicester's De Montfort University.

Broadbent estimates that used in a seven-storey building, HighDro Power could knock up to £926 off the annual electricity bill. It would also qualify for feed-in tariffs. 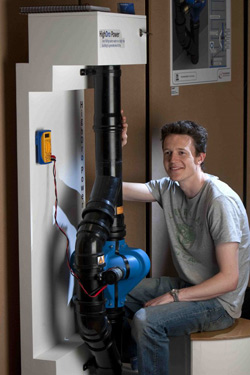 "The inspiration for HighDro Power was literally a 'Eureka!' moment that came when I emptied a bath in a hotel and found that it cleared very quickly and with a large amount of force," says Broadbent. "It seemed logical that this energy should be harnessed in some way to create green electricity and help governments meet targets and it filled an obvious gap in the market."

The next stage is to test the system in a real building.

Broadbent is waiting to hear whether he will win accolades from the Institute of Engineering Designers and the Dyson Awards. He is also entering the Kevin McCloud Green Heroes award to win the opportunity to show HighDro Power at the Grand Designs Live show.

This article originally appeared on BusinessGreen.com, and is reprinted with permission.

Deloitte Looks to Telepresence to Cut Costs and Carbon

See all by Andrew Charlesworth