Imagine a full-scale farm right in the heart of New York City, in the deserts of Darfur or on the moon. While you might have to wait some time for your lunar lettuce, vertical farming technologies are increasing the possibilities of cultivating crops much more efficiently here on earth.

Moving farms into buildings might change the way much of humanity grows its food. And while vertical farming is on the cusp of blooming, the main hurdle isn’t technology; it’s one of engineering and funding.

"We know how to grow food inside," says Dickson Despommier of Columbia University. "That’s not the problem. What we don’t know yet is how to integrate that technology into a tall building. That appears to be a simple, but perhaps expensive engineering problem."

The End of Farming As We Know It

Known as the founder of the modern vertical farming concept, Despommier is a Public Health professor and stresses the urgency of changing the way humanity cultivates its food.
{related_content}
"We choose to live in cities," he says. "By the year 2050, nearly 80% of the earth’s population will reside in urban centers. The human population will increase by about 3 billion people during the interim. If we don’t learn how to [vertical farm] soon, these will become horrible places."

According the UN, the amount of arable land per person decreased from about an acre in 1970 to roughly half an acre in 2000 and is projected to decline to about a third of an acre by 2050.

There will simply not be enough farmland to feed us.

Offland farming also uses a fraction of the water land farming does. This is why Despommier believes that vertical farming will take root first in "water challenged" areas of the world, like the Middle East. 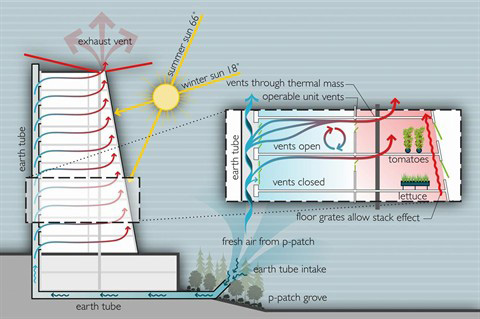 Moving farms off land and into urban buildings offers a solution to land and water scarcity and a really impressive swath of other natural, health, economic and political challenges:

• Produces crops year-round; 1 indoor acre is equivalent to 4-6 outdoor acres or more, depending upon the crop (e.g., strawberries: 1 indoor acre = 30 outdoor acres)
• Avoids weather-related crop failures due to droughts, floods, pests
• Grown organically: no herbicides, pesticides, or fertilizers
• Virtually eliminates agricultural runoff by recycling black water
• Returns farmland to nature, restoring ecosystem functions and services
• Greatly reduces the incidence of many infectious diseases that are acquired at the agricultural interface
• Converts black and gray water into potable water by collecting the water of evapotranspiration
• Adds energy back to the grid via methane generation from composting non-edible parts of plants and animals
• Dramatically reduces fossil fuel use (no tractors, plows, shipping.)
• Converts abandoned urban properties into food production centers
• Creates sustainable environments for urban centers
• Creates new employment opportunities
• We cannot go to the moon, Mars, or beyond without first learning to farm indoors on earth
• May prove to be useful for integrating into refugee camps
• Offers the promise of measurable economic improvement for tropical and subtropical Least Developing Countries (LDC). If this should prove to be the case, then vertical farms may be a catalyst in helping to reduce or even reverse the population growth of LDCs as they adopt urban agriculture as a strategy for sustainable food production.
• Could reduce the incidence of armed conflict over natural resources, such as water and land for agriculture

The many potential benefits from vertical farming have inspired a dazzling display of proposed projects that present novel architectural, energy, farming and recycling solutions.

Vertical Farms are the fruit of a global greenhouse movement decades in the making. Yet only as recently as last year-with the collaborations of artists, architects, city planners, farmers and politicians-did the concept reach high-profile media attention by way of an Op-ed in the New York Times. 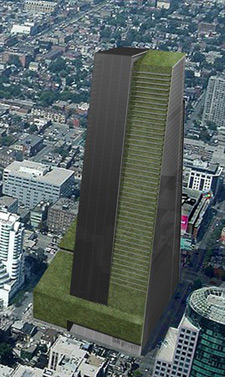 The upsurge in vertical farm visibility might be linked to its role in the climate change debate. Land use (mainly forestry and agriculture) and its impact on the earth’s natural carbon cycle has been given much attention by policymakers looking to reduce carbon emissions.

"Every indoor acre you farm gives around 5-6 outdoor acres for the trees grow back and suck up more carbon," says professor Despommier. "That gives someone a chance to catch up with the climate change issue. Vertical farming allows the possibility to giving land back to what it was intended for and that is producing hardwood forests."

Despommier estimates that if a city were to give the nod, a viable vertical farm would spring up within a year.

"That’s why a prototype would be a good place to start, writes Despommier in the New York Times. "I estimate that constructing a five-story farm, taking up one-eighth of a square city block, would cost $20 million to $30 million.

Funding for the farm should be a blend of public and private capital.

"Part of the financing should come from the city government, as a vertical farm would go a long way toward achieving Mayor Michael Bloomberg’s goal of a green New York City by 2030. If a farm is located where the public can easily visit it, the iconic building could generate significant tourist dollars, on top of revenue from the sales of its produce."

Yet, the bulk of funding should come from private venture-capital investors who see the potential profits of vertical farms.

Despommier cites a Cornell University project of hydroponic (soil-free, water-only) lettuce that produced each year 68 heads of lettuce per square foot. "At a retail price in New York of up to $2.50 a head for hydroponic lettuce, you can easily do the math and project profitability for other similar crops."

Despommier and the rest of the world-particularly the urban and arid world-are waiting to see which city will be the first to take off-land farming seriously. Apparently, Manhattan Borough President, Scott Stringer, has expressed interest in bringing a vertical farm to the city.

In more ways than one, the sky is the limit. 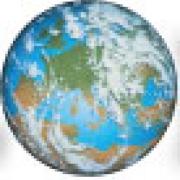