This article first appeared at Justmeans.

In 1906, Ray Stannard Baker wrote the following passage about automobiles in "The Boy’s Book of Inventions: Stories of the Wonders of Modern Science."

“The electric vehicle which has had its most successful development in this country has its well-defined advantages and disadvantages. It is simpler in construction and more easily managed than any other vehicle: one manufacturer calls it ‘fool proof.’ It is wholly without odor or vibrations and practically noiseless. It will make any permissible rate of speed and climb any ordinary hill. On the other hand, it is immensely heavy, owing to the use of storage batteries; it can run only a limited distance without recharging…

“Indeed, all the manufacturers of electric vehicles speak with the confidence of the day when the whole of the United States will be as thoroughly sprinkled with electric charging stations as it is today with bicycle road-houses.”

A hundred years ago we were at a crossroads similar to the one we find ourselves at today, with electric vehicles vying against gasoline-powered cars. Back then, the choice was made, influenced by a good deal of lobbying and maneuvering by the oil industry. The facts that gasoline-powered cars were cheaper and didn’t have the range issues of electrics also helped to tip the scales.

A century of inertia

So, the question is, how much have things changed? Electric cars are still more expensive and still confront the range limitation challenge that seems to be inherent in trying to store adequate energy in electrical rather than chemical form. 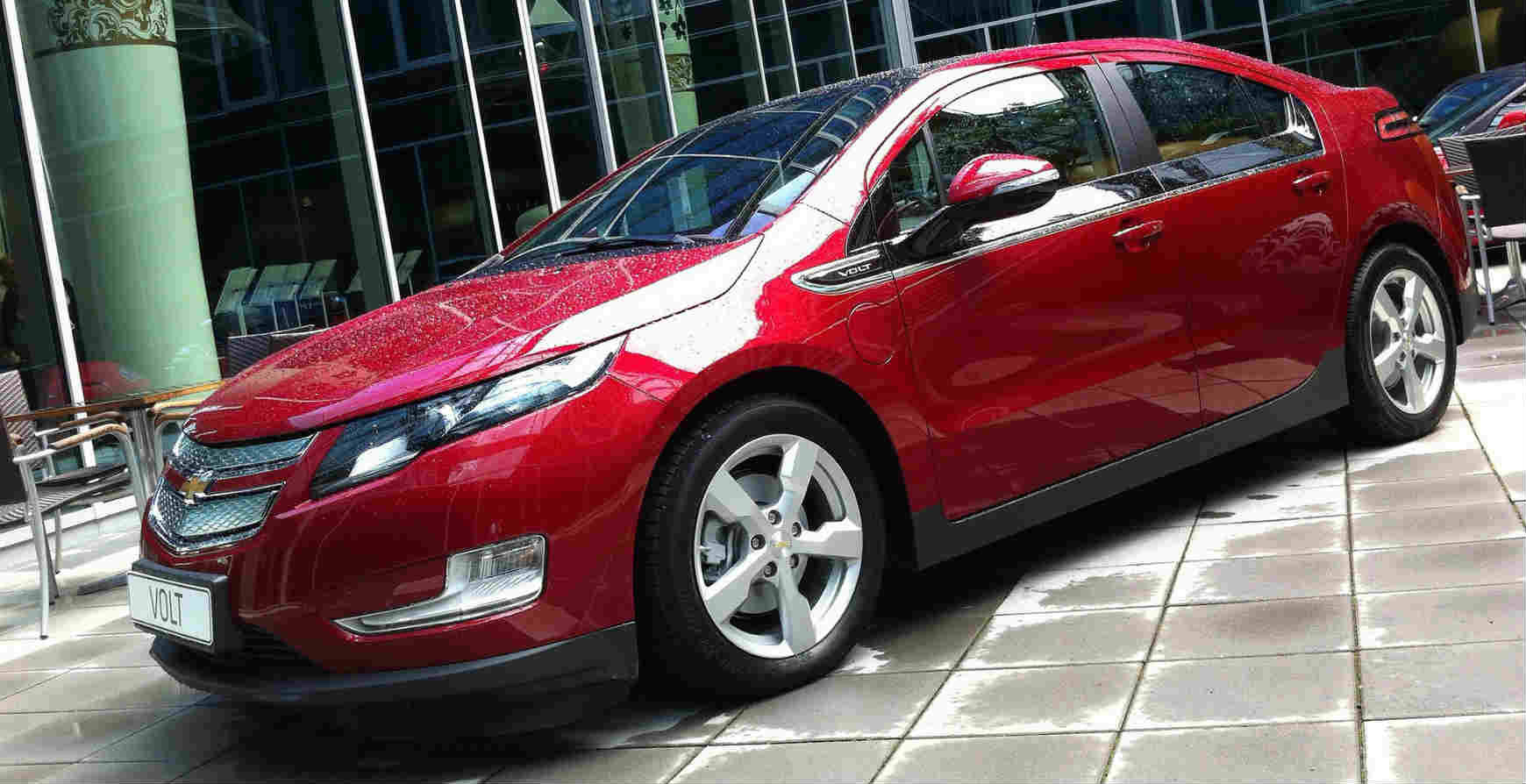 Dropping prices on EVs such as the Chevy Volt tempt consumers, but range anxiety is still an issue.

What has changed is the realization that widespread usage of fossil fuels has put our planet and everything living on it at risk of a destabilized climate that threatens every aspect of our life-support system.

With so much of our day-to-day life built around a gas-powered car that can be quickly and (of late) inexpensively filled up at any of thousands of gas stations that cover the landscape, the challenge of switching over to a completely different energy is huge.

Yes, EV prices are coming down (see Chevy Volt) and charging stations are popping up everywhere. According to DOE, 8,983 charging stations and 22,387 charging outlets are in the U.S. Whether that’s as many as there were bicycle roadhouses in 1906 is not clear, but unless people are convinced that it’s enough to assuage their “range anxiety,” they will hesitate to buy an EV. Roughly 120,000 electric vehicles were sold in the U.S. last year, bringing the total up to around 280,000.

There are a couple of other dimensions to this question. One is that, unlike gasoline, people do have access to electricity at home, which is where much of the vehicle charging — at least for local trips — will take place. That’s why there needn’t necessarily be as many charging stations as there are gas stations.

The other dimension is that not all charging stations are created equal.  What varies is the amount of time required for a charge, although what is true in all cases is that it will take longer to charge your car with electrons than it did to fill it with gasoline.

Most people will come to recognize that it will be worth the wait in order to maintain a livable climate, but that doesn’t mean it will be an easy adjustment.

Battery services and other business innovations

Some areas, such as Denmark, are experimenting with the idea of a charged battery as a service. Instead of owning the battery as part of your car, the battery is a shared resource. When your charge is getting low, you pull into a station, where they lift out your battery and replace it with a fully charged one. This doesn’t take any longer than filling up a gas tank, but it’s a different ownership model more in line with the sharing economy.

Not all EVs are configured for this, but several Nissan models are designed to work with a robotic battery switching station designed by Shai Agassi of Better Place. That same approach, by the way, was used by New York taxi companies in the early 20th century when electric cabs made a brief appearance. The other option would be to go to hydrogen fuel cell, which Toyota is vigorously pursuing.

That concept might be a little slow to catch on in the U.S., which is why companies such as Tesla, and now BMW and VW, are investing in the installation of a vast network of high-speed charging stations. One hundred new stations will be installed along the busy coastal corridors such as Interstate 95, which runs between Washington and Boston.

The need for (charging) speed

The charging networks are not necessary for those using their EVs for local commuting. They can charge up at home, perhaps with a second car in the garage for longer trips. But for those people who will own only one car and want it to do everything they are used to doing, they’ll want those charging stations when they take to the road. 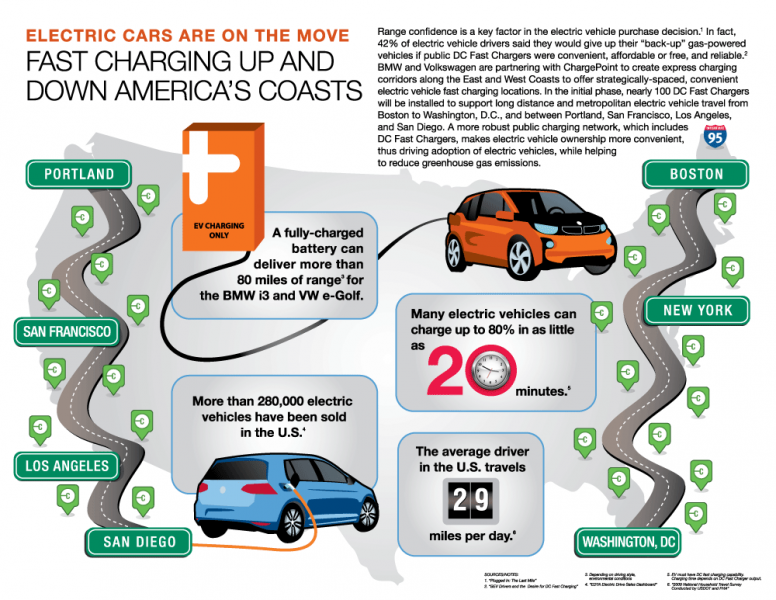 BMW and Volkswagen are working with ChargePoint to build "charging corridors" for EVs.

The question of charging speed adds an additional wrinkle. Tesla, for example, has proprietary electronics both in their Superchargers and their cars, which allow for a charging speed that can provide as much as 340 miles of range per hour of charge. So if you’re in a hurry and you’re not far from home, 15 minutes will get you 85 miles.

By contrast, plugging a Tesla Model S into a typical household outlet will get you only 3 to 4 miles of range per hour of charge. That means that an overnight charge, while enough for commuting around town, won’t be enough to extend that road trip by very much. Perhaps it will be enough to get you to the nearest Supercharger. An optional 240V wall connector can raise that to 58 miles of charge per hour, enough to get you a full charge overnight. Only Tesla cars can use Tesla chargers.

All EVs have a standard connector, a J1772, which can connect to any and all models of public chargers. But the charging time depends on the level of the charger. A Level 1 charger essentially will get you the same charging efficiency as a regular outlet at home, up to 5 miles per hour. A Level 2 charger will provide about 19 miles per charging hour, provided that the car has the appropriate electronics to accept this amount of current. Likewise, a Level 3 charger, which requires a 480 Volt connection, will provide about 120 miles of charge in an hour.

While Level 2 chargers have become fairly standardized and you can get one for your home, the Level 3 standard is still in dispute. Contenders include the CHAdeMO plug, used by most Japanese EVs including the Nissan Leaf; and the newer J1772 Combo, which, as the name implies, adds additional functionality to the existing J1772 plug. This type of connector is used by the Chevy Spark EV and the BMW i3. To further complicate things, there is also Express DC fast charging offered by Chargepoint (PDF), which uses the standard J1772 connector.

The new network announced by the two Ws is being developed in conjunction with ChargePoint, the largest provider of EV chargers in the U.S., with over 20,300 stations already in place. According to information provided by Chargepoint, “many vehicles can charge up to 80 percent in as little as 20 minutes.”

“This is the last piece of the puzzle to let people make an electric car be their primary vehicle,” said Pasquale Romano, chief executive of ChargePoint. “Otherwise, you’re telling drivers they can’t travel, and that just doesn’t work.”

Why PG&E, National Grid and Enel are charging up to power EVs