Hip hop can bring green issues to communities of color

When I was diversity director at North Carolina State University, part of my job was to recruit young people — often from communities of color — into the College of Natural Resources. It could be a struggle; these were talented and creative kids, but often they didn’t see how environmental or sustainability issues were relevant to their lives.

Then, a mentor who knew that I was a hip hop artist made a suggestion: Why not try to reach them through your music? “Whatever comes naturally to you always captures peoples’ attention,” he said. On the next recruitment trip, I took his advice.

After introducing myself, I told the kids in the auditorium, "OK, when I pause, I want you all to say, ‘Come on.’" Then I began.

Here’s my minority report.
About what’s going on with the poor.
No clean water, got liquor stores…

Suddenly these kids were listening.

Now I had their attention. As we went through the lyrics again, the students started to make the connections between access to natural resources and community health, between representation and environmental justice. This wasn’t just about going to college, I told them — this was about having a voice, about doing something about these injustices, such as unsafe drinking water and lead contamination. And they got it.

Too often people of color dismiss environmental concerns because they have other pressing issues in their lives.

Hip hop has been speaking to peoples’ struggles since it came out of South Bronx in the 1970s, whether it’s been about poverty, racism or gun violence. Why shouldn’t it be about environmental justice, too?

Ever since, I’ve been using hip hop — or a philosophy that I call "hip hop forestry" or "hip hop sustainability" — to create a bridge for young people to environmental issues.

That bridge is sorely needed. Although people of color in the United States face elevated risk from environmental harms — including air pollution, hazardous waste and flooding — their voices often are neglected in important discussions about environmental policy. In many cases, they simply aren’t at the table. A 2014 survey of environmental nonprofits, foundations and government agencies, conducted by Dorceta Taylor of the University of Michigan, found that while people of color make up 36 percent of the U.S. population, they constitute no more than 16 percent of the workforce of any environmental organization. The result, Taylor argued, was the emergence of a disproportionately white "green insiders club."

Too often people in these communities dismiss environmental concerns because they have other pressing issues in their lives — in many cases, they’re in survival mode — and they believe "the environment" is disconnected from their experiences. We need to find forms of communication that resonate with those affected by climate change, pollution, food insecurity, contaminated water and toxic exposures, and that speak to their values.

The Rev. Lennox Yearwood Jr., president of the Hip Hop Caucus, which works to bridge the gap between communities of color and environmental advocacy, has seen this play out in the larger climate movement. His organization has a project called People’s Climate Music that issued a 2014 climate-inspired album. "Within the movement we have a tendency to make this much harder than it needs to be," Yearwood said. "Climate change is definitely a scientific issue, but if we come at the discussion strictly from that direction it limits the ability to grow [the movement] and invite more people to be a part of it.

"We want to break down the silos. Sometimes people feel like they have to be invited to the movement or invited to the conversation. We’re trying to create new things that people can see themselves in."

This is where hip hop sustainability can make a difference. Hip hop is a form of expression created by the marginalized communities of color I am trying to reach.

If you listen closely, you’ll hear in the music stories about the environment and how it affects communities. In his 1999 song "New World Water," Brooklyn native Yasiin Bey (then known as Mos Def) breaks down the challenges some communities face in getting clean water, especially in the urban environment.

It’s the new world water, and every drop counts
You can laugh and take it as a joke if you wanna
But it don’t rain for four weeks some summers
And it’s about to get real wild in the half
You be buying Evian just to take a f___in’ bath
Heads is acting wild, sippin’ poor, puffin’ dank
Competin’ with the next man for higher playin’ rank
See I ain’t got time try to be Big Hank,
F___ a bank; I need a 20-year water tank
‘Cause while these knuckleheads is out here sweatin’ they goods
The sun is sitting in the treetops burnin’ the woods
And as the flames from the blaze get higher and higher
They say, ‘Don’t drink the water! We need it for the fire!’

I always tell young people: If no one hears you, then how will your concerns be heard?

For that matter, I wouldn’t call myself an environmental rapper. I’d say I am a rapper who happens to be environmentally conscious and who is aware that, like everyone else, my decisions can hurt the planet and what happens to the planet can hurt me. In one song I write about poor air quality and how the absence of trees and green spaces — and the abundance of concrete in public housing projects — affects human well-being. In another, I touch on the role trees play in promoting clean air and clean water.

Forestry’s the practice, hip hop the religion
Both made by humans, both imperfect make a new tradition
This hip hop forestry, our trees are not a commodity
They are our teachers showing how to live on troubled land and live in harmony
This hip hop forestry because both rose from the underground
One changed landscapes, the other changes the landscape of sound…
Hip hop forestry, emissions we don’t do carbon copies
We cross-pollinate culture and we respect our water of bodies

I always tell young people: If no one hears you, then how will your concerns be heard? You know what’s happening in your communities, and you should be able to articulate this. But first you have to get into the room and make your voice heard. Otherwise no one will know.

If they do get into that room, they’ll probably find that few people at the table look like them. But if we have any chance at resolving the environmental threats facing so many of our communities, they’ll have to be at that table. 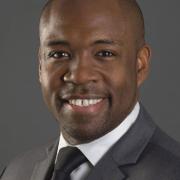 See all by Thomas Easley