How Aveda and Alcoa use purpose and impact to hook employees

If your company hasn't yet figured out how to engage employees in sustainability efforts or social responsibility goals, you might want to do so soon.

According to new research by WeSpire, 53 percent of all employees, including 71 percent of those under age 30, want to work for companies making a positive social or environmental impact. Net Impact has found almost identical percentages for those who want to personally make an impact towards these issues through work.

In this post-recession era when there’s competition for talent, you don’t want to jeopardize access to half of the workforce and two-thirds of the younger workforce by not tapping into these desires.

“Making an impact rates higher than a lot of other things,” in job choices, said Susan Hunt Stephens, founder and CEO of WeSpire, a technology company that designed a software platform to help companies engage employees in social impact and sustainability. Impact is higher than pay, for instance, with 45 percent of survey participants wiling to take a pay cut for a job with a positive impact, she said.

But companies make a mistake if they think just young people are drawn to helping and social impact. In fact, according to U.S. Bureau of Labor Statistics, the age group most involved in volunteering are people about 40 years old, closely followed by people around 50.

“By age, 35-to-44 year-olds were most likely to volunteer (29.8 percent). Volunteer rates were lowest among 20-to 24-year-olds (18.7 percent)” the BLS reports in "Volunteering in the United States 2014."  Of course it may be that millennials look to their workplaces to make an impact.

Regardless of age, employees engaged in sustainability or company-sponsored volunteer work are found to be more productive and more efficient in their jobs as well as more loyal in that they stay longer, according to WeSpire.

Productivity, efficiency and employee retention are undisputedly tied to profitability.

There’s little disagreement these days that employee engagement in social and environmental sustainability is good for companies.

The big question, however, is how to get employees to actually engage, to take steps to get involved. “What do you do to actually get people to act on their intent,”as hunt Stephens phrased it.

That was the subject of a Webcast aired on GreenBiz this week, "Changing Behavior Through Purposeful Work: The Journey to 100% Engagement," hosted by WeSpire with participation by managers from Aveda and Alcoa who offered examples of what works in their companies.

It’s not just a feel-good question.

“According to studies, every year the U.S. experiences $500 billion in lost productivity from low employee engagement,” in work, said Melissa Chelminiak, Aveda's director of mission engagement and education.

From Chelminiak's observation, “In order for employees to be fully engaged, they must be deeply connected to people, places and things they care about. They want to feel a sense of purpose,” she said. “Then they feel valued and supported and they develop stronger communications skills and meaningful relationships,” with tangible results in productivity and retention.

Those observations coincide with WeSpire’s approach which, in turn, is based on Stanford University’s Persuasive Technology Lab, where researchers have built models about what motivates people to take action. 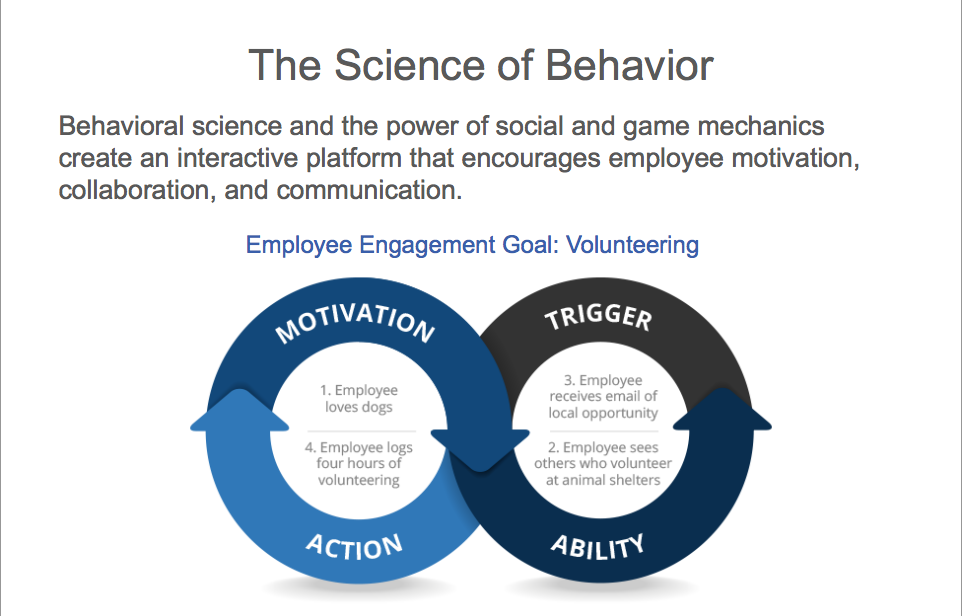 Stanford researchers have found that when an action is hard to do yet draws from an employee’s skill set and talents and relates to his or her interests, that employee will get involved. So sustainability actions could be structured to spark gaming interests or concern for children, for example.

And in addition to tapping into interests employees already have, an effective engagement program must also be careful to avoid unconscious assumptions that get in the way of action, such as that people want to volunteer during certain hours, which may or may not be true.

Social aspects, including the use of social media or providing opportunities to join with co-workers, help motivate people towards action as well, WeSpire found.  MGM Resorts uses gaming and about 30 percent of its employees are involved in its sustainability efforts.

But what works for one company may not work for others. Hunt Stephens warns that programs in small companies will necessarily differ than those in large companies. Likewise, programs just getting off the ground should not try the tactics used at places where employee engagement in sustainability is already embedded in the culture. Projects of short duration that involve teams and story telling to share experiences might work at a company just starting its engagement program.

Giving employees some autonomy and being sensitive to cultural fit are important, she said.

Aveda gives employees choices displayed via an Aveda Mission Leader software program. Because Aveda's hair and beauty products are based on nature's offerings and sustainable manufacturing, employee engagement in sustainability and giving back is central to its branding.

“At Aveda, the decision to care about the world we live in is central to everything we do,” Chelminiak said.  It offers five or six ongoing programs that employees can get involved in.

Two very successful ones have been its "Pollinator Protection" program in which employees can help out on a 58-acre wildflower farm near Aveda's headquarters in Minnesota where bees are cultivated and Caps for Aveda, in which employees collected, recycled, pelletized and reused caps from Aveda bottles, leading to a national awareness that plastic bottle caps if not recycled go into the waste stream and interrupt marine life.

Alcoa offers a unique program of sending interested employees on environmental expeditions with Earthwatch Institute. Employees apply for the program and compete with each other based on their plans for how they will bring what they learn back to initiate action within the company or within their communities.

To date, 220 employees from 10 countries have gone on these expeditions and undertaken 12,000 hours of field research.

Malika Harrison, Alcoa's community engagement and program manager, says the program has greatly enhanced sustainability awareness throughout Alcoa's operations because the employees who go on expeditions come back and follow through with ambituous programs.

As a result, some 58 percent of Alcoa employees then get involved in its month of service programs around sustainability each October, Harrison said.