How blockchain could help put the Paris Agreement on course, from the bottom up

Last week was a downer for global climate policy. At the United Nations climate conference in Madrid, countries failed to commit to more ambitious goals that could limit warming to 1.5 degrees Celsius. Some of the most polluting countries (including the United States) didn’t even recognize that such ambition was necessary.

Is there a silver lining here? Well, nothing can completely replace a strong international framework that encourages ambitious commitments from national governments, but that part of the process is largely top-down. The Paris Agreement is designed to complement top-down pledges with bottom-up pressure. And the pressure is on.

Youth-led climate movements have surged across the world. In Madrid, half a million people marched through the streets as the COP25 negotiations languished. Additionally, where governments have failed to step up their ambition on pledges, other actors have picked up some slack, including the private sector. This is particularly true in the United States, where commitments from cities, states and businesses can compensate for federal inaction, particularly in the short term.

Unfortunately, the current mechanisms for reporting progress are too centralized to keep pace with the groundswell of bottom-up action. That’s where technologies such as blockchain come in. They provide a decentralized yet reliable record, which allows for information to be collected more quickly than traditional methods, from a wider set of actors.

The United Nations has been addressing the mismatch between action and recordkeeping through various working groups, but the tech sector has the capacity and know-how to drive these efforts forward.

For instance, I’ve been part of an initiative associated with Yale University that aims to create a comprehensive open-source platform for tracking climate progress. This Open Climate platform would combine data on five systems: the geophysical state of the planet, the climate pledges made by countries and other actors, the actions taken to meet those pledges, the markets used to trade carbon credits and the finance that flows between actors.

The U.N. has been addressing the mismatch between action and recordkeeping through various working groups, but the tech sector has the capacity and know-how to drive these efforts.

A blockchain backbone can bring all of these domains together. Blockchain is a record of information that isn’t stored on any one server but instead across a network. It enables multiple existing data sources to interact with each other, while also integrating new sources. The tech buzzword for this flexible quality is "interoperability." Plus the system is transparent and ownerless, roughly in parallel with the U.N. process.

To better understand what that all means, let’s consider climate pledges. A blockchain platform could integrate country-level pledges made through the U.N. process with the pledges made by cities, states and businesses. It also could assess progress on those pledges based on emissions reductions reported in near-real-time using satellites or internet-of-things (IoT) sensors.

Martin Wainstein, founder and lead researcher at Yale OpenLab, said the recent rise of blockchain has created a perfect confluence of capacity and need.

"Over the last 10 years, advancements in computer science and math have laid the foundation for a recordkeeping system that builds trust between actors, isn’t controlled by anyone and is based on consensus," he said, standing outside of a plenary hall at COP25. "There’s no better application for that technology and no more pressing use case than what’s happening right here with the Paris Agreement stocktake." 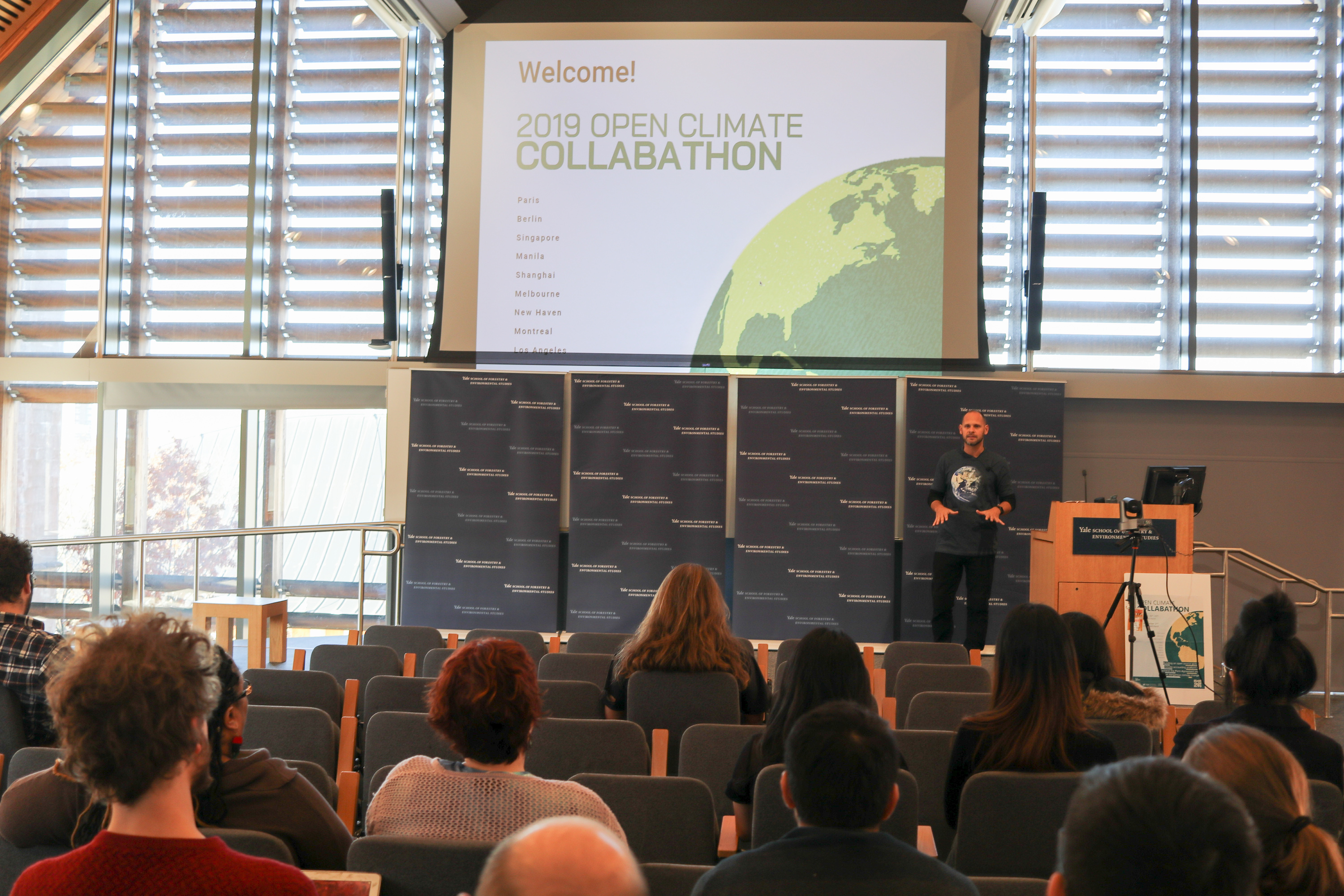 Angel Hsu, a professor at Yale-NUS University in Singapore, emphasized how blockchain can help keep corporations accountable to their climate targets.

"More than 6,000 businesses have pledged some kind of voluntary action on climate change, but we don’t have a way of easily assessing how they’re doing on implementing their plans," she said. "Digital solutions like blockchain can help bring together multiple streams of data and information, lowering measurement and reporting barriers through the integration of technologies like smart meters and sensors and reducing transaction costs."

Leading up to COP25, Wainstein and Hsu coordinated a global effort to prototype the first stages of an Open Climate platform. Based on a principle of "radical collaboration," they worked with 350 technology professionals and students in eight locations around the world to create open-source projects in response to prompts from climate policy experts.

In the future, a similar process potentially could engage thousands of people in building the platform further. The result would be a global and open-source portal for actionable information about climate change, kind of like a Wikipedia for climate accounting.

The Open Climate project is part of a wider set of emerging initiatives using blockchain and other digital technologies to mobilize climate finance and support climate policy. A network called the Climate Chain Coalition brings together over 150 organizations tackling these challenges, with the support of the U.N. Framework Convention on Climate Change.

Not all digital innovation needs to be based on blockchain. There are ways to spur action by putting systems online in more traditional formats.

For example, the U.N. has approved over 8 billion tons of emissions reduction credits generated from forest conservation in the developing world, but only 4 percent of them have been purchased, mostly by developed countries such as Norway.

Digital solutions like blockchain can help bring together multiple streams of data and information, lowering measurement and reporting barriers.

At COP25, the Coalition for Rainforest Nations launched a platform called REDD.plus that enables businesses to buy these credits directly, potentially opening up billions of dollars in climate finance.

"The REDD.plus platform now provides the private sector, and in time individuals, an opportunity to play their part," said Kevin Conrad, executive director of the Coalition for Rainforest Nations, in a press release.

The promise and peril of digitization

New technologies are never a silver bullet. Putting a problem onto a blockchain doesn’t immediately solve it, and the digital innovations that could accelerate climate action are still nascent and largely untested.

However, every innovation starts out nascent and largely untested. The way to move forward is to keep trying out new systems and learning from them, with a sense of urgency befitting the scale of the challenge.

As the younger generation keeps reminding us, time is running out.