Sometimes, five heads are better than one.

One common concern among corporate energy teams at midmarket businesses is that they don’t procure enough electricity or have enough lawyers to take on the risks of a power purchase agreement. That’s why five companies with varying levels of experience in renewable energy procurement are getting together to contract for about half the generating capacity of a 100-megawatt North Carolina solar farm.

The group, which calls itself the Corporate Renewable Aggregation Group, is a collaboration between media organizations Bloomberg and Cox Enterprises, fashion company Gap Inc. and cloud software firms Salesforce and Workday.

After evaluating several models, the companies designated a single legal representative to help negotiate a deal on their collaborative behalf. They’ve each signed onto a uniform virtual PPA contract, one that allows them to buy small portions of the solar project being developed by developer BayWa. The group was advised by the Business Council on Climate Change and the Business Renewables Center, a program run by the Rocky Mountain Institute. The relationship was facilitated by LevelTen Energy, a company that has created a platform for connecting renewable energy buyers and sellers. 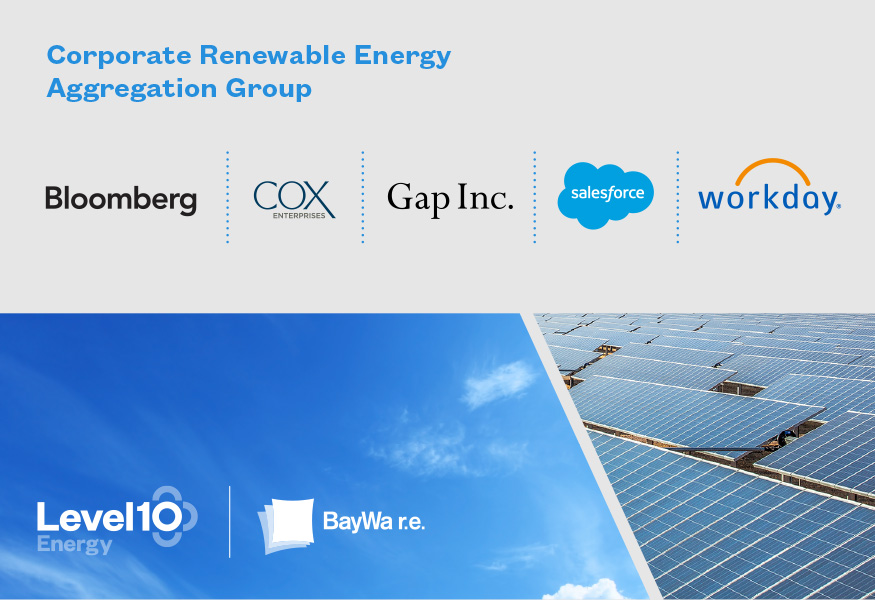 "This transaction is a great example of a group sharing best practices, working together and showing the benefit that cross-firm collaboration can have," said Michael Barry, head of sustainable business operations at Bloomberg, in a statement about the new deal. "It also serves as an example to developers that a market exists for these projects."

He’s speaking from experience. Bloomberg has signed a number of VPPAs in the past, both on its own and in collaboration with other companies. For example, it’s one of two companies that have signed contracts to support Enel Green Power’s 185-MW HillTopper wind farm in Illinois. Bloomberg has picked up 17 MWs of capacity; General Motors has contracted for 100 MWs.

Salesforce also has quite a bit of past history with VPPAs. Its largest contract so far came in August: an 80-MW deal for a wind farm in Illinois, marking its third such agreement. Relatively speaking, however, the other three companies were neophytes: All of them had invested in renewables, but never to this scale — no matter how modest it may seem compared with the mammoth PPAs announced by the likes of Google, Microsoft and Apple.

The group behind the deal announced this week got together rather informally: They met during a networking event for renewable energy buyers. At some point, after debating ideas informally, they decided to explore the idea of aggregating their needs in order to get a better deal.

"We didn’t have a trusted partner who had the knowledge of doing a deal that really wanted to take on an anchor role," said Steve Bradley, assistant vice president of environmental sustainability for Cox Enterprises. "We wanted to see if we could figure this out together."

One of the more notable illustrations emerged in August when tech giant Apple revealed that it had helped orchestrate a deal that included three smaller buyers: internet company Akamai; craft marketplace Etsy; and financial services firm Swiss Re. Collectively, they’re buying 290 MW of solar and wind power, but it’s clear that Apple’s buying clout was instrumental in getting the deal done. "They provided, for us, a safety net," Lasse Wallquist, senior sustainability risk manager for Swiss Re, told me at the time.

Another aggregation model that companies are studying is exemplified by a deal in Europe, where chemical company AkzoNobel, tech firm Google, biotech and health sciences organization DSM and health tech multinational Philips joined forces to negotiate at least two PPAs for wind farms in the Netherlands. In that situation, the companies signed separate, equally sized contracts.

Our vision here is to try to streamline as many parts of the process as we can, to reduce the friction so that we can bring more buyers — especially more smaller buyers — to the table.

The contract disclosed Thursday represents yet another twist on this model, one that LevelTen CEO Bryce Smith described as a first-of-kind collaboration. While the exact size of each contract was not disclosed, each company signed a uniform VPPA that ranged from 5 MW to 10 MW each — much smaller than typical. The term for each is 15 years. Using a single lawyer helped reduce the transaction costs, according to the buyers.

This contract will be used as a template for future deals; it was refined during the negotiation process. "Our vision here is to try to streamline as many parts of the process as we can, to reduce the friction so that we can bring more buyers — especially more smaller buyers — to the table," Smith said.

LevelTen is also seeking to scale the matchmaking process with software analytics technology. The company this week added a feature called the Dynamic Matching Engine, which uses information submitted by would-be buyers to identify both potential procurement partners as well as projects that meet more specific purchase parameters such as deal size, the location where the renewable power is being added or the generation technology.

"It’s nearly impossible to make those matches with the naked eye," Smith said.

The straightforward nature of the process was critical for Workday: The deal represents the company’s first utility renewable energy deal. "We were surprised how quickly we were able to be brought up to speed on the PPA execution process through the inherent knowledge sharing that a collaborative group can provide," said Erik Hansen, sustainability director, global impact, for Workday, which sells human resource software applications. (Hansen’s comments were sent via email in response to a list of questions.)

The company’s investments so far have included onsite renewables, as well as energy attribute certificates that derive from markets in which the company’ operations are based. The company used about 80,500 megawatt-hours of power in 2017. "Where possible, we aim to purchase from projects located on the same grid as our facilities," he said. Workday plans to add an 865-kilowatt solar array to a new building at its campus in Pleasanton, California, later this year.

Cox has explored the idea of a negotiating a VPPA on its own for some time, but the idea of joining forces had appeal — in part because it allowed each company to reduce the amount of risk it was assuming. "We could wade into the pool, rather than jump into the deep end," Bradley said.

The deal will allow Cox to accelerate progress toward its long-term goal of achieving carbon-neutrality by 2044. It will bite 3 percent out of the company’s current carbon footprint, he estimated. Future deals are on the drawing board, he suggested.

At the same time, by combining their buying power, the companies in this group were able to negotiate a better price and decrease the amount of money that each needed to spend on legal fees, Bradley said.

What’s more, each member of the group brought some unique contribution, as far as knowledge. For example, Cox has considerable experience in evaluating potential projects: It has invested in developing close to three dozen solar projects over the past decade, with a combined capacity of more than 29 MW.