How boxes, bots and biofuels are routing FedEx’s sustainability map

The delivery company is racing to stay ahead of the curve.

Like other major shipping and logistics companies, FedEx is actively routing — and rerouting — its map for more sustainable transportation alternatives. Central to that journey is rethinking package design and embracing lower emissions delivery alternatives.

We recently had the opportunity to catch up with FedEx Chief Sustainability Officer Mitch Jackson about how that strategy is evolving. Not surprisingly, we learned a lot.

Thinking about the box

The FedEx packaging lab, where the company tests ideas and experiments with new technologies and approaches, helps customers identify potential solutions not just to better protect their shipments from damage, but also to make them more economical and sustainable. When considering the relationship of packages to fuel efficiency, we usually think of the shipment weight as the primary factor. What's less obvious is that the volume of boxes also plays an important role.

Of course, oversized boxes waste material. But Jackson tells us that there's another reason why FedEx wants to avoid what he calls "shipping air" — it's because that means the truck or the airplane is not being used most effectively.

FedEx has been advocating for a change in vehicle regulations to allow the length of semi-truck trailers to be extended from 28 feet to 33 feet, without increasing the weight allowance.

So, while it does not cost much to ship air, from a direct cost perspective this practice represents an opportunity cost because more packages could have been shipped in that same vehicle or airplane if they were all sized optimally. This is reflected in a "dimensional weighing" charge that FedEx assesses to encourage customers to follow guidelines. In practice, a great many trucks fill up well before they reach their weight limit.

In fact, that's why FedEx has been advocating for a change in vehicle regulations to allow the length of semi-truck trailers to be extended from 28 feet to 33 feet, without increasing the weight allowance. It is looking for a legislative fix at the federal level.

"In this age of e-commerce, we're trying to minimize those occurrences when the trailers 'cube out' versus 'weigh out,'" Jackson said. "That's so we don't run out of cube space without hitting the regulatory weight threshold as often."

Doing so would have some impressive results. According to Jackson, it would reduce congestion by 6.6 million truck trips per year, cut truck traffic by 1.3 billion miles per year and eliminate 4.5 billion pounds in carbon emissions annually.

The idea is to "reduce or eliminate impacts, replace the outdated applications with the right ones, and revolutionize, meaning to identify the technologies of tomorrow and start implementing them today," Jackson said.

The work on the trailers is one example, but the strategy is applied across the board to include packaging, paper use, aircraft operations, facilities oversight and vehicle strategy, he said.

Modernizing the ground and air fleet

That observation was exemplified by FedEx’s order for 1,000 Chanje electric vans from China, starting at the midpart of this year, to be installed in California. The company started the electrification process with the last-mile delivery vans because the stop-and-go nature of those vans lends itself very well to electric vehicles.

For larger vehicles, FedEx has reserved 20 of the Tesla tractor-trailers. It uses natural gas trucks exclusively at a facility in Oklahoma City and also uses intermodal transport methods, meaning FedEx will ship by rail where it makes sense. Doing so avoided 297,000 metric tons of CO2e, while also saving $134 million and 26 million gallons of fuel since fiscal year 2009. Carbon intensity, on a revenue basis, has dropped by 37 percent during the same timeframe.

FedEx's goal is to be using 30 percent alternative fuels for its air fleet by 2030.

One other area Jackson pointed to is the commitment to aviation biofuels. The company’s goal is to be using 30 percent alternative fuels by 2030. Good news on that front is that Red Rock Biofuels is breaking ground on a new refinery that will produce aviation fuel from forest biomass and regional sawmill waste. The facility will produce 15 million gallons per year, half of which will go to FedEx. 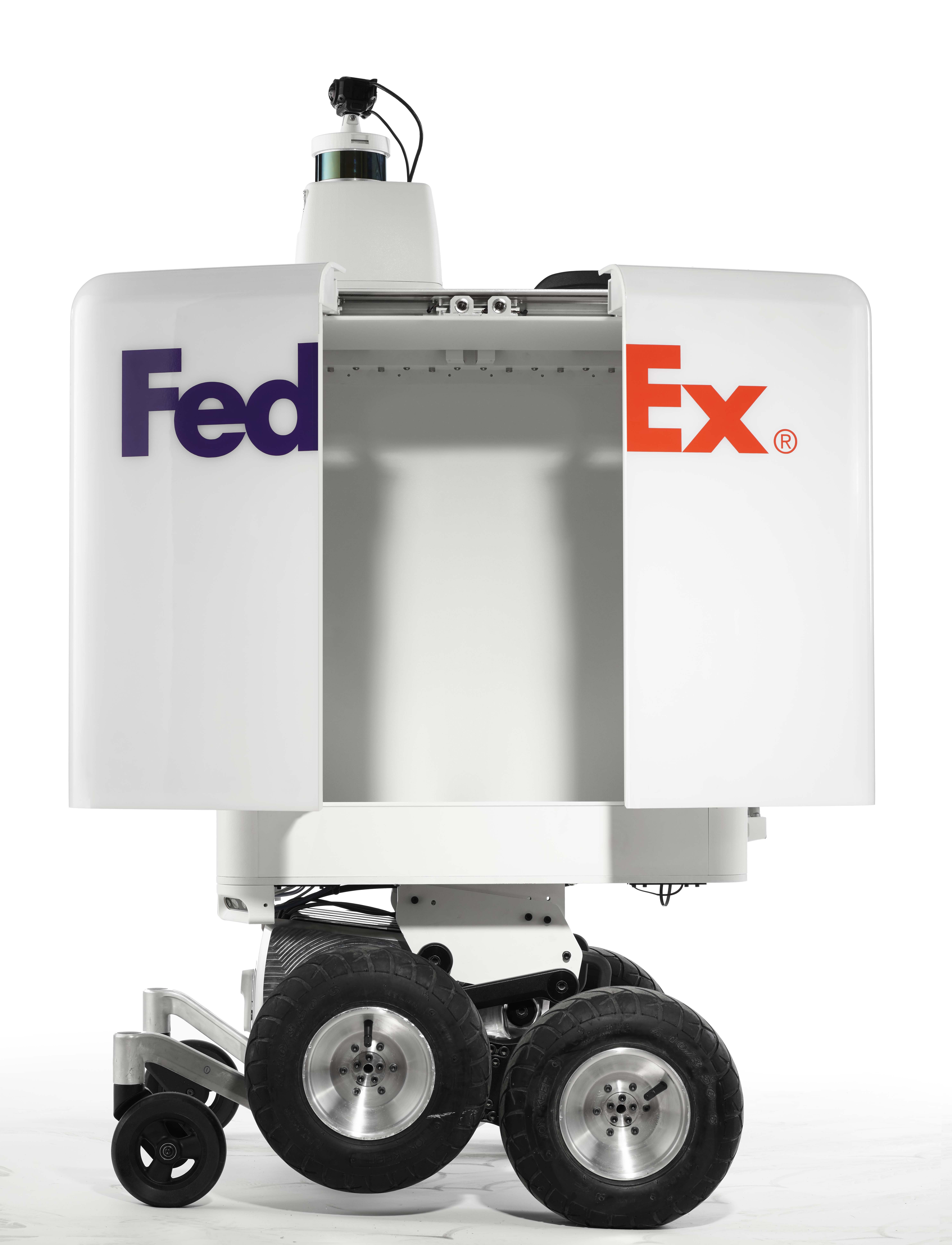 One other example of how FedEx is reducing its transportation-related footprint: the company’s Hold at Locations initiative. Customers can have packages securely left for them at one of 12,000 Walgreens, Walmart or FedEx offices. This reduces the number of re-attempts saving fuel and emissions. Jackson said that over 80 percent of U.S. citizens are within five miles of one of these facilities.

Perhaps the most exciting concept, and one that clearly fits into the Revolutionize category, is the company’s SameDay delivery bot. This is a somewhat slow-moving six-wheeled robot, based on the iBOT, originally developed by inventor Dean Kamen back in the 1990s as a wheelchair that can climb stairs. The version being evaluated by FedEx, however, is totally autonomous and carries pizzas rather than people.

FedEx will be testing the concept out in several cities later this year. A number of retailers including Pizza Hut, Loews, Walgreens, AutoZone, Target and Walmart and others will be partners in the venture. So the next time the doorbell rings with your pizza delivery, it might just be one of these. (Do you tip it?)

Each bot contains a white cargo box, with the FedEx logo, of course, that can carry up to 100 pounds. The battery-powered bots are small enough to fit through a standard doorway and like their predecessors, they also can climb stairs. The logistics of the delivery experiment are still being worked out, but Jackson suspects that "the idea is that we are going to be in the neighborhoods with these retailers, making some of these deliveries."

These days, when the very idea of what it means to deliver is undergoing transformational change, FedEx is doing their best to try to stay ahead of the curve.