<p>Breweries large and small are trying creative and innovative strategies to become more sustainable in light of market changes and demands.</p>

The U.S. produces beer. A lot of beer. In 2013, over 195 million barrels — each barrel equaling 31 gallons — were produced. When you consider that it typically takes between four to 10 pints of water to produce one pint of beer — you do the math.

And producing good suds takes more than water. Consider the energy needed for compressed air, lighting, refrigeration and other demands. Couple those with the waste products remaining after the brewing process is complete, and it all adds up to a resource-rich and waste-producing libation.

The U.S. beer market has been relatively flat, even slightly down, with overall sales of beer declining 1.9 percent in 2013. Enter an innovative and sustainability-minded group of craft brewers that has set the beer market on its ear. Sales of craft beer is on a significant rise, with a jump of 17.2 percent in sales in 2013 driven by market demands for local food and beverages.

Both sectors of the brew biz are making significant impacts on their commitments to sustainability. When it comes to the major brewers, Anheuser-Busch, the country's leading brewer by sales, has undertaken some strident measures such as reducing water use by 37 percent in the last four years, brewing nearly one in six of its beers using renewable fuel (biogas, landfill gas and solar), recycling 99 percent of the solid waste in its breweries and reducing the material in its aluminum, fiber and glass packaging.

It makes sense that water usage is one of the most significant resources that goes into brewing beer. Anheuser-Busch took on an interesting marketing campaign recently to encourage men to reduce their use of water. The campaign asked men to stop shaving in the weeks leading up to World Environment Day in June. More than 2,300 of its employees took up the challenge and stopped shaving for two weeks. It's estimated that because the average shave takes five gallons of water, they saved over 160,000 gallons. (Sorry, A-B, but the Boston Red Sox were way ahead of you.)

On a serious note, Anheuser-Busch has reduced its ratio of water used to beer produced to 3.5-to-1 (excluding the amount of water it takes to grow the crops).

Craft brewers get crafty with water use

That's a goal that many smaller craft brewers are shooting for, but they have their challenges. Craft brewed beers use more hops for that great flavor that beer drinkers want (which is also leading to a shortage of hops, but that's another story) and those hops require more water to process.

New Belgium is a sustainably minded brewer that has a goal of reducing water in its production process to a 3.5-to-1 ratio. Producing the "hoppier" beers and the demand for more bottles than kegs are contributing to a decrease in its water efficiency in the past few years, but it recently added sub-meters throughout its facilities to address any wasted water efficiency opportunities.

Whether it's in the brewing process, lighting, heating or cooling facilities or product refrigeration, energy usage is another top resource sink. Energy is also costly so efforts to conserve energy significantly will improve the operating bottom line. 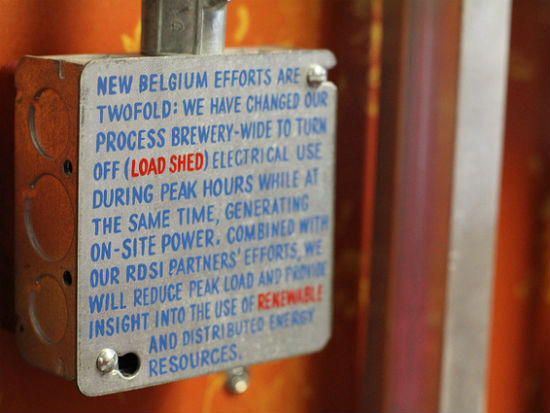 The Craft Brew Alliance, with well-known brands such as Widmer Brothers, Redhook, Kona Brewing Company and Omission Beer (brewed by Widmer Brothers), is a brewer with its eyes on energy and other conservation opportunities. "We are continually searching for efficiency opportunities around energy and water, realizing that this can translate into big money savings," said Julia Person, sustainability manager for the CBA. "We've found that even simple, quick fixes can result in a significant energy savings. In our pursuit in making our beers in a sustainable manner, we have targeted compressed air leaks as well as fan cycling in our refrigerated spaces and have seen immediate benefits." Fixing compressed air leaks in its breweries can save an estimated $20,000 a year in energy costs.

Sierra Nevada beer is one of the best-selling craft brews and the company is fully committed to its sustainability mission. Sierra Nevada, based in Chico, Calif., prides itself on owning one of the largest private solar arrays in the country. The company's 10,573 panels on its brewery roof and parking lot, at the on-site daycare and at its private rail spur produce two megawatts of DC power and provide the brewery with nearly 20 percent of its energy needs.

In addition, Sierra Nevada is the only brewery in the country to house its own hydrogen fuel cells. The fuel cells produce one megawatt of power. Together, on a clear and sunny summer day, the two supply about 90 percent of the brewery's energy, according to the dashboard on the company's website. 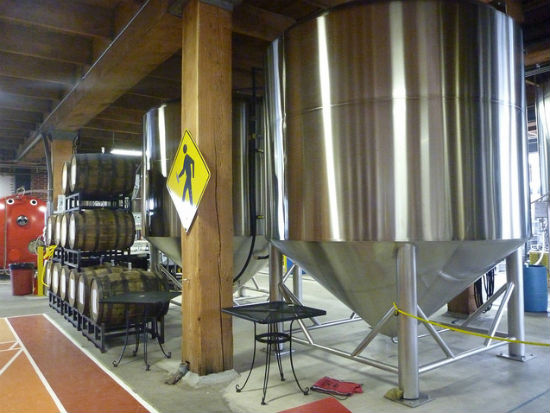 Refrigeration accounts for about 35 percent of a brewery's electricity bill. Inadequate insulation of cold storage areas and pipes carrying steam or cold fluids, air infiltration, open cooler doors and other energy wasters can have a big influence on energy costs. Using an infrared camera at Fort George Brewery in Astoria, Ore., PPRC Industrial Engineer Michelle Gaither and staff at Fort George discovered inefficiencies from heat loss on uninsulated steam pipes and a small compression tank, and from the surface of the hot tank, especially the uninsulated door. They found cold losses from refrigerant lines and cold storage areas, especially around doors. Insulation was specified for the pipes, and a high-speed insulated roll-up door was recommended for cold storage.

At the end of the brewing process, what's left is delicious bottles of amber refreshment — and literally tons of spent grain, barley husks and hops — every day. Much of that waste goes into animal feed or compost, but some brewers are coming up with alternate uses for the waste.

Last year, the Alaskan Brewing Co. in Juneau installed a unique boiler system that burns the waste and turns it into steam that powers a majority of the brewery's operations. Some brewers are developing unique products. Waste brew grains are going into everything from pizza crusts to lip balms.

Composting is one way to dispose of the waste. In response to the lack of composting facilities available to it, Sierra Nevada developed what it calls its "HotRot" composting system. The in-vessel system composts wastes from the brewing process along with food service remains, filter remains and waste paper from its operations and concert venues. The compost is used to enrich the hop fields and restaurant and employee gardens.

A new kind of beer label

Washington-based organization Institute for Environmental Education and Research has developed an eco-label program that allows brewers to display their impacts to the environment on their labels. It looks similar to the nutrition labels on foods. The label reports impacts on carbon, energy and water. In Oregon, Hopworks Urban Brewing and Fort George Brewery have adopted the labels.

Many more areas of sustainability are being addressed by brewers, large and small, in addition to those above because it's good for their bottom line and their consumers demand creative and innovative solutions that are good for the environment. With brand names like Hell or High Watermelon, Lagunitas, Smooth Hoperator, Tactical Nuclear Penguin and Yellow Snow selling at a rapid pace, what else would you expect?

Top image of by Redhook beer by Craig Damlo via Flickr. 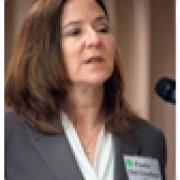 See all by Paula Del Giudice