If our society chooses to meet the ambitious climate goals set at COP21 in December, there soon will be businesses around the globe that make money by cleaning up excess carbon dioxide from the atmosphere.

Given that industry rarely pays any penalty for dumping CO2 into the atmosphere today (and they dump a lot of it), this idea of "carbon-negative" industry can sound a bit like science fiction. However, with just a little help from philanthropists, large-scale carbon removal ("negative emissions" [PDF]) businesses stand poised to prosper in the not-too-distant future — in turn helping to make our long-term climate goals a reality.

Carbon removal is critical to make the climate math add up, but often is missing in action.

To understand why carbon removal is so important for meeting the Paris Agreement climate goals — and why it presents such a large market opportunity — one needs look no further than the latest climate change "Assessment Report" (PDF) from the Intergovernmental Panel on Climate Change (IPCC).

Of the over 100 climate modeling simulations consistent with the Paris Agreement goals analyzed by the IPCC scientists, 87 percent involve net-negative emissions by the end of the century — a feat only accomplished through the large-scale deployment of carbon removal solutions.

These scenarios consistently involve billions of tons of CO2 removed from the atmosphere each year starting as early as the 2040s. At any reasonable carbon price, this translates into a revenue opportunity for atmospheric CO2 cleanup that is tens, if not hundreds, of billions of dollars per year — in addition to any value generated from beneficial use of CO2. 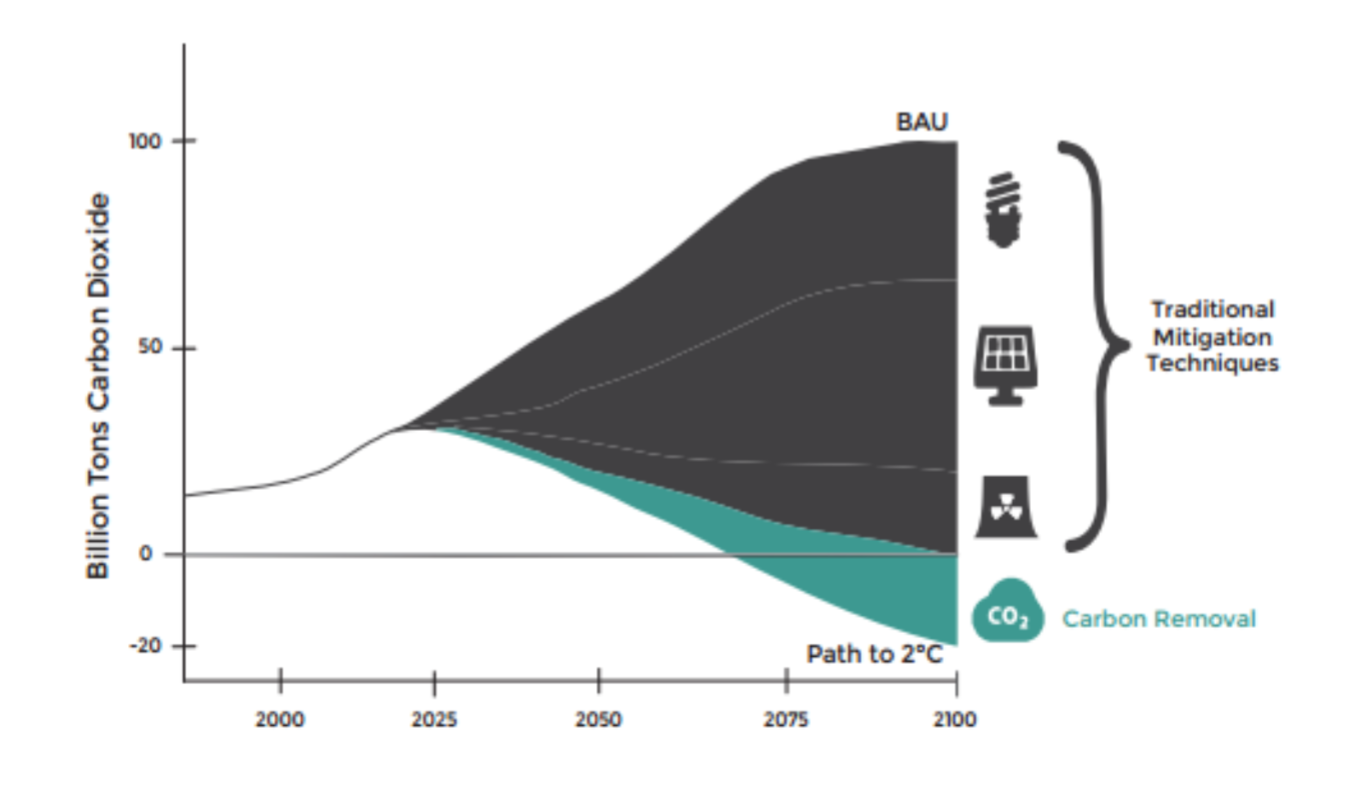 But there is a catch. A recent report from the National Research Council (NRC) noted that scalable, sustainable, economically viable carbon removal solutions do not exist today.

This is not to say that developing such carbon removal solutions is impossible. The same NRC study noted an enormous technical potential for a portfolio of carbon removal solutions, such as: bioenergy systems (PDF) coupled with carbon capture and storage technology; advanced farming and forestry (PDF) techniques that harness the power of photosynthesis to lock carbon in plants and soils; and even direct air capture (PDF) machines that "mine the sky" for carbon-based inputs to manufacture materials such as plastics and cements.

It does, however, mean that we will need dedicated research and development efforts and changes to markets and policies to increase demand for a portfolio of carbon removal solutions — much like the efforts that have brought the costs of solar PV systems down by about a hundredfold since the 1970s. 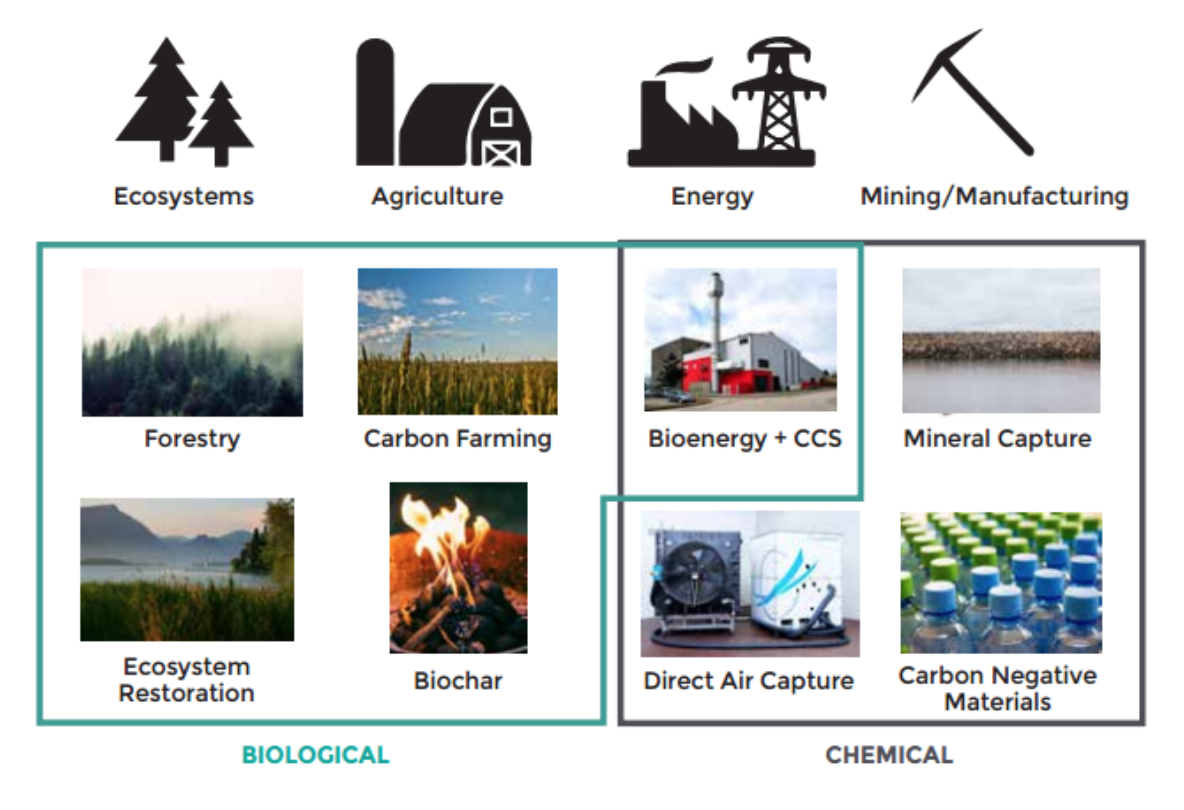 Unlike solar, however, carbon removal solutions have faced negligent policy support to date. The resulting lack of incentives has proved highly challenging for innovators working toward carbon-removing businesses.

For example, market forces today incentivize industry to use fossil carbon from the ground — not carbon from the air — to power our society and build our consumer goods. Agriculture and forestry companies are incentivized to manage lands in ways that deplete carbon stocks, not enhance them.

Where climate regulations do exist, they are frequently too weak (or difficult to access) to make carbon removal businesses viable. And with only a negligible amount of public- or private-sector funding for research and development funding flowing to carbon removal solutions today, few political constituencies can demonstrate the value of carbon removal and advocate for the support it needs to reach commercial viability.

Here’s where philanthropy enters the picture. Charities and nonprofit groups have a long history (PDF) of tackling social and technological challenges that fall between the cracks of government and industry action.

Philanthropies also can be patient with their grants and measure returns over longer time horizons, as well as pursue cross-border action that can be difficult for national governments to take on alone. Given the longer-term, global nature of the challenge and opportunity of developing carbon removal solutions, philanthropies stand in a unique position to help set research priorities and build markets that support the carbon removal industry.

So what are leading climate philanthropists doing about carbon removal today? That is exactly what a co-author of this post, Giana Amador, set out to find in her analysis, "Philanthropy Beyond Carbon Neutrality" (PDF), recently released to the public on the Center for Carbon Removal’s website.

When Amador combed through a database assembled by the Foundation Center that compiled information on thousands of grants related to climate change, she found that less than 1 percent of climate-related grant-making over the past decade directly supported carbon removal projects. 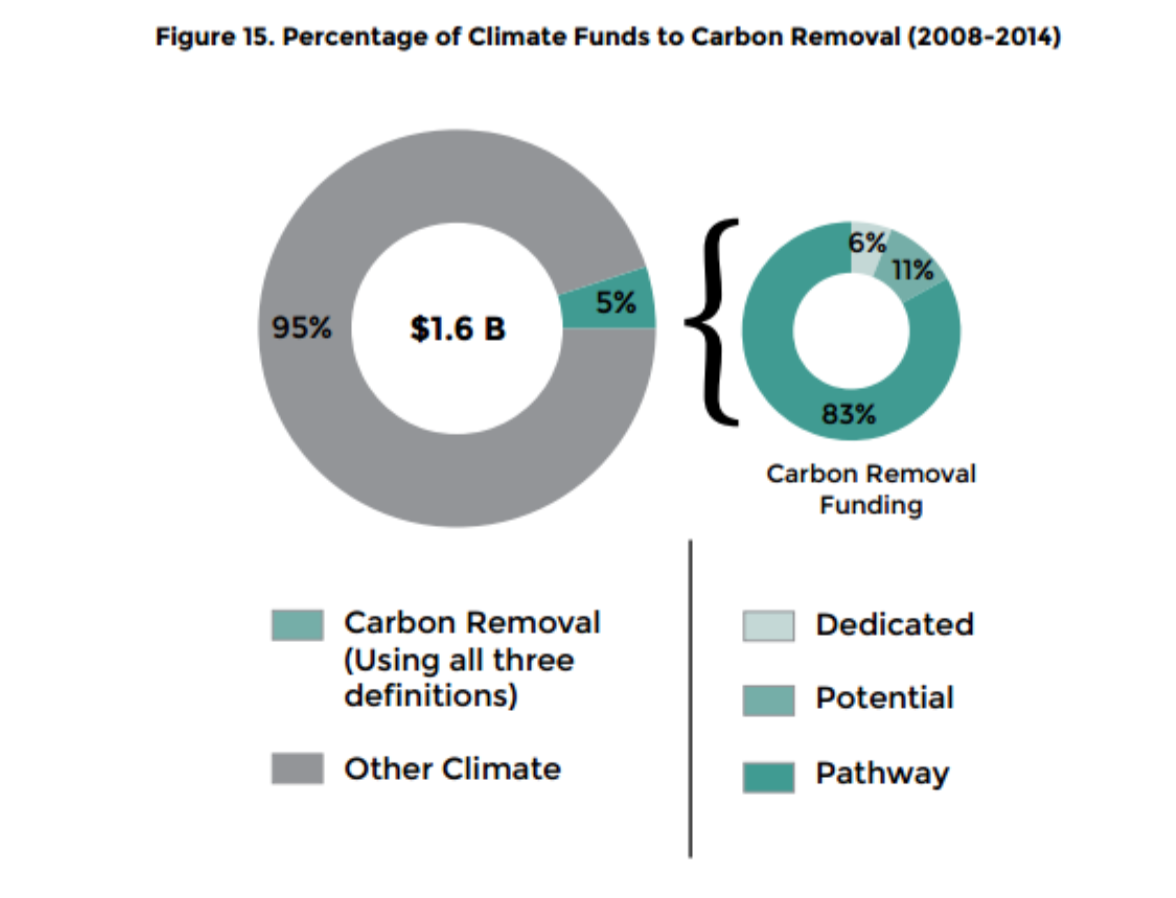 She then interviewed 50 philanthropy and climate experts to understand why there was so little philanthropic support for carbon removal, and she discovered a number of interesting findings.

First, of the few grants that did support carbon removal projects, most were motivated for co-benefits these projects offered beyond carbon sequestration (climate adaptation, sustainable economic development, etc.). Philanthropies were not actively trying to build markets for carbon removal.

In other words, carbon removal simply had not been a priority for major climate funders precisely because of all of the challenges facing the field.

Fortunately, these interviews also revealed that philanthropies increasingly saw the urgent need to develop carbon removal solutions today to facilitate meeting our climate goals in the future, and were motivated to figure out how to make carbon removal strategies viable.

The question on these philanthropists’ minds: Where to start?

The rise of the carbon removal industry

This question of how philanthropies can kick-start the development of a carbon removal industry motivated Berkeley Energy & Resources Collaborative (BERC) and the Center for Carbon Removal to co-host a panel discussion March 14 at the University of California, Berkeley. At the event, panelists identified the important role that philanthropies can play in fostering the development of carbon removal solutions.

The key, they said, is ensuring that the climate conversation is expanded to include efforts to draw down atmospheric CO2 levels, in addition to reducing CO2 emissions into the atmosphere. Importantly, this conversation identified the critical role for industry and civil society alongside policymakers to ensure carbon removal solutions develop in an economically and socially viable manner.

"We need to think of CO2 as a waste that needs to be cleaned up." — Klaus Lackner from @ASU_CNCE

Beyond raising awareness about the need for carbon removal, the panel at Berkeley also spoke about the opportunity for philanthropies to help identify and advocate for the appropriate research, development and demonstration (RD&D) activities needed for carbon removal solutions to flourish.

For example, detailed technology and policy roadmaps can be highly valuable for fostering new policies to address novel challenges, much like the National Academies’ "Rising Above the Gathering Storm" report laid the blueprint for the ARPA-E clean energy innovation program (which today enjoys rare bipartisan support from Congress). 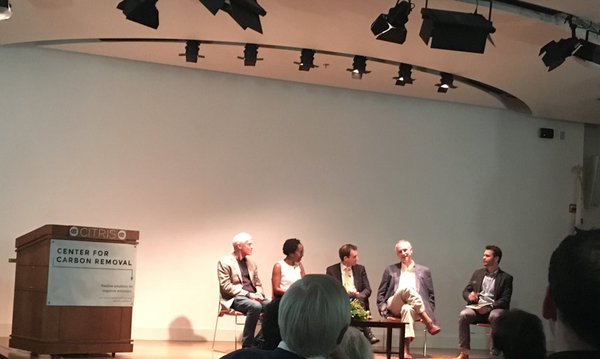 Panelists also talked about the value of disruptive philanthropic strategies — such as innovation prizes (the Virgin Earth Challenge) and even direct RD&D for "bottleneck" questions — to have a large leverage by unlocking orders of magnitude more funding from government and industry sources. 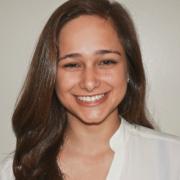