How to build a flood resilient future

Seven of the United Kingdom’s 10 wettest years on record have occurred since 1998. Its wettest winter in history came in 2013, and the next wettest in 2015. In a single week in November, 400 homes were flooded and 1,200 properties evacuated in northern England. The frequency and severity of these events is expected to increase as a result of climate change, meaning that many more communities will suffer their devastating effects.

Edward Barsley, who is completing his Ph.D. in architecture at Cambridge, is determined to help people adapt to the threat of flooding, and not just in the U.K. His new book offers advice on the nature of flood risk but also a practical and highly visual guide to adapting built and natural environments as the threat posed by flooding continues to rise. 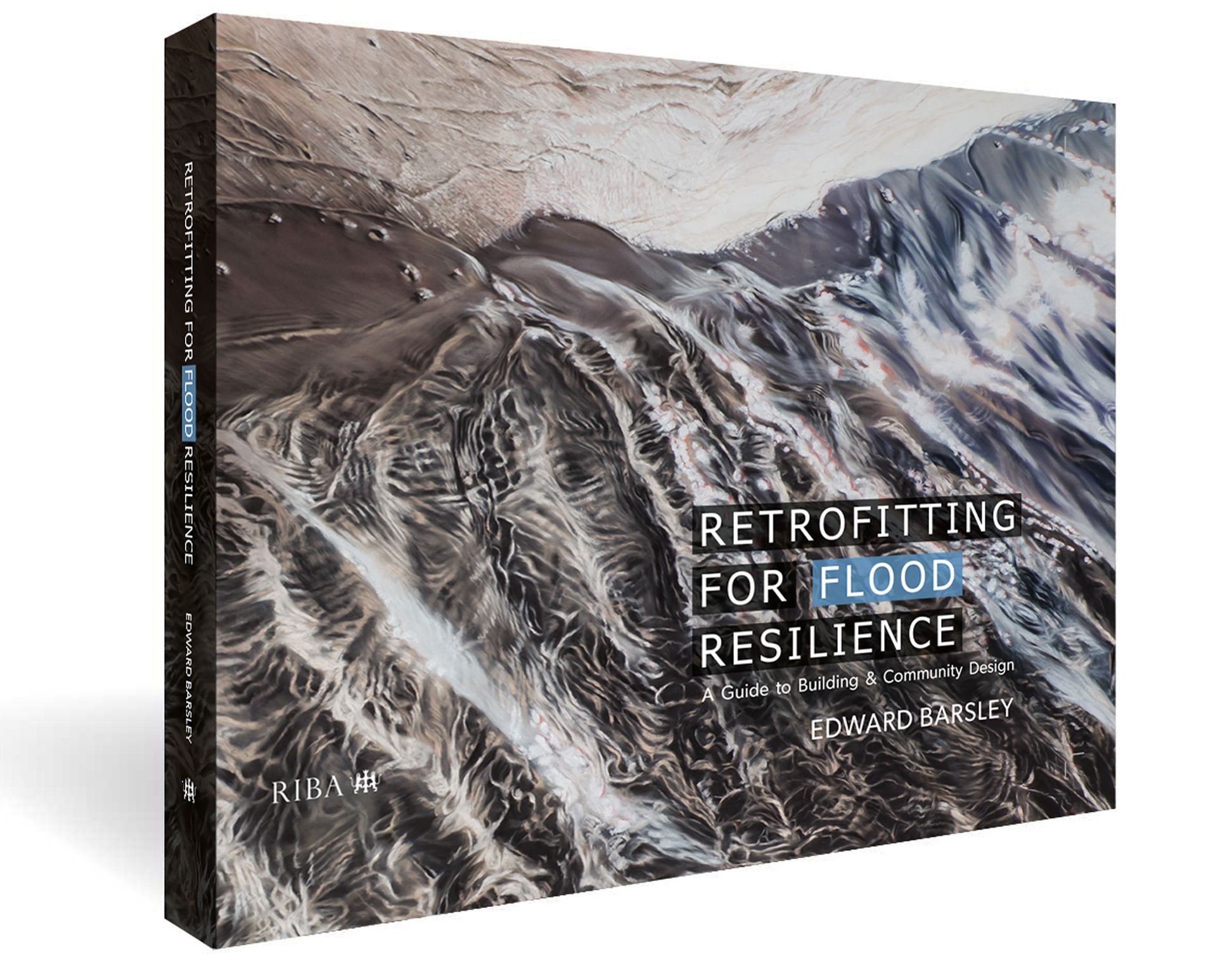 "Retrofitting for Flood Resilience: A Guide to Building & Community Design" (RIBA, 2020) features over 300 original illustrations and diagrams with case studies from around the world. Based on Barsley’s research at Cambridge and his work as founder and director of The Environmental Design Studio (TEDS), it discusses strategies for adaptation at catchment, community, street and building scales, in relation to both new build and existing developments.

This isn’t about trying to side-step climate change, Barsley explains: "The building industry and governments around the world urgently need to cut and curtail greenhouse gas emissions. But there’s enough momentum already locked in to the climate system that flooding will be getting worse in many places for the foreseeable future."

"We need to prepare for that and adapt. And if we can reduce the exposure and vulnerability of existing and new buildings to flooding, we won’t be using vast amounts of energy and materials to gut the buildings, dry them and reinstate them."

The frequency and severity of these events is expected to increase as a result of climate change, meaning that many more communities will suffer their devastating effects.

He expects his new book to interest architects, engineers, urban planners and other professionals, but ultimately was determined to create an accessible guide for the general public. Rather than describing strategies in a dry, overly technical manner, he set out to develop a style of graphics that could clearly convey the benefits of flood risk adaptation.

The visuals compare vulnerable spatial setups (for walls, floors, rooms, houses, civil spaces, businesses and communities) with resilient configurations and illustrate the stark differences in outcomes and consequences that flood resilience can provide. 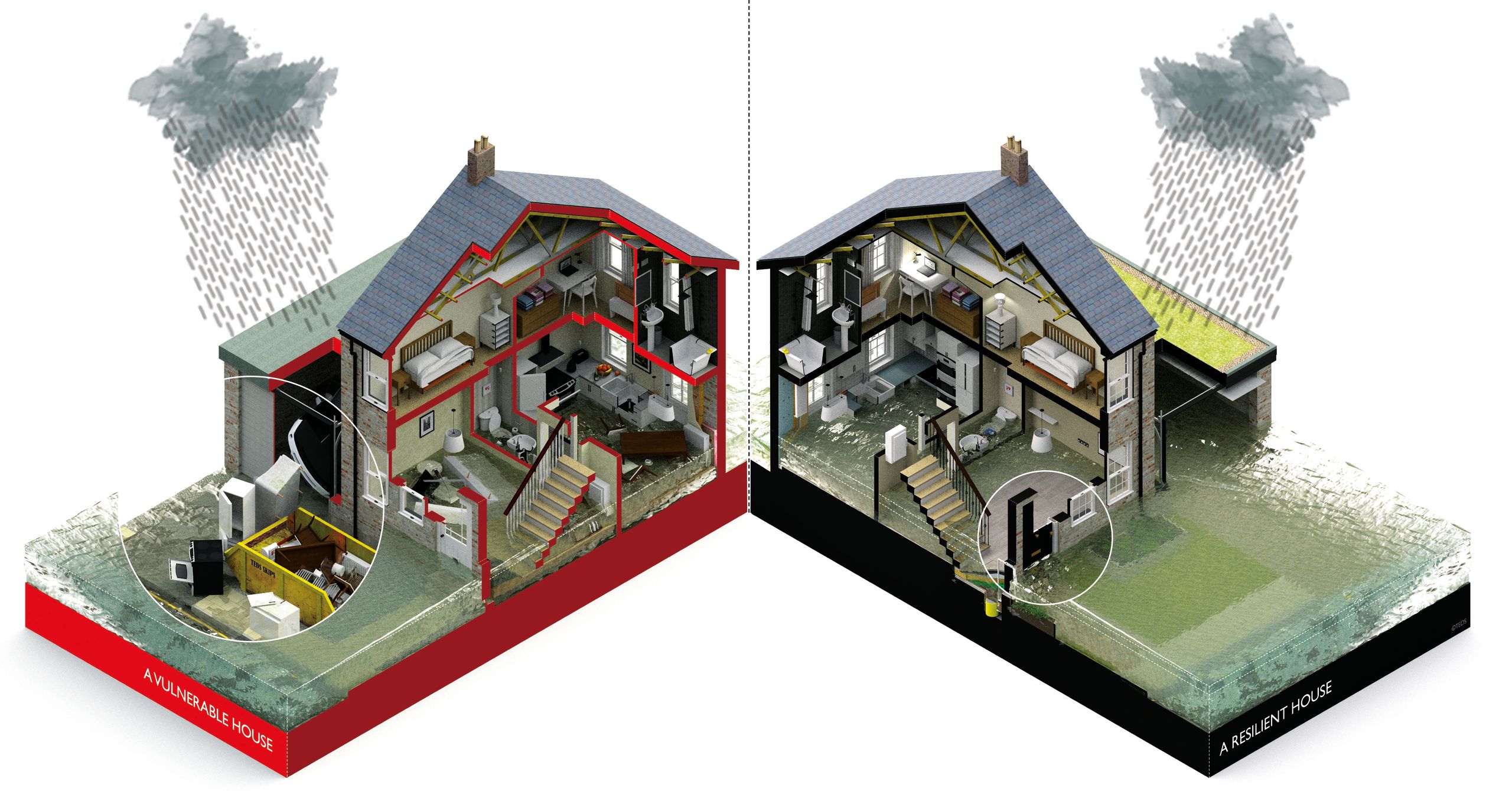 "After a flood," Barsley observes, "people are often overwhelmed by the experience and just want things to go back to the way they were. This is totally understandable, but also makes me think we need to be more proactive and work to identify those properties vulnerable to flood risk and help people understand how they can prepare and adapt accordingly."

As part of his masters of philosophy in environmental design in architecture at Cambridge, Barsley ran the "Shifting Shorelines" study, which explored the design of a flood resilient coastal settlement. The proposal employs what Barsley refers to as an "Embrace" strategy for shoreline management which uses a multi-layered threshold of both soft and hard sea defences with a town that’s configured to be "open to the sea, whilst safe from it."

After this project, Barsley went on to work for a London architecture practice that specialised in flood resilient new builds. During this time he worked on the Climate Adaptive Neighborhoods study, which went on to win the RIBA’s President’s Medal for research in practice. In 2013, he set up his own practice, The Environmental Design Studio (TEDS), which recently won the Sunday Times Resilient Home competition (in collaboration with JTP) with the design of the "Home for All Seasons." This scheme was designed for resilience to flooding, heat waves, extreme cold, energy shortages and societal change.

Yet while Barsley remains passionate about innovating resilient new builds, he also recognized the urgent need to retrofit existing properties. This led him to start a Ph.D. at Cambridge. He was about to focus his research on Sri Lanka but over the winter of 2013 and 2014, England suffered severe flooding — causing an estimated $1.63 billion of damage — and Barsley found inspiration much closer to home: Yalding, a Kent village close to where he had grown up.

Yalding is a historic gem with a variety of house types and construction materials, but has been badly affected by flooding on a number of occasions. Barsley says: "It made me realize there was a real need to develop a framework to evaluate a community’s flood resilience to past, present and future flood risk conditions; and then identify how they could best adapt."

After running community engagement workshops, issuing household surveys and interviewing many throughout the village, Barsley began evaluating the consequences and spatial implications of four scenarios: how Yalding was affected in 2013/14; what the impact would be if it flooded again, given that some people fitted flood doors and have made their properties more flood resilient; what would happen in the future when things got even worse; and the expected outcome if the village was retrofitted to be flood resilient.

Throughout his book, Barsley discusses a wide range of strategies for flood risk adaptation. At the larger scale he classifies them into six distinct spatial tactics: attenuate, alleviate, restrict, realign, create and embrace. At the property level, his strategies include making a building flood "resistant" (keeping water out), making it "recoverable" (making the inside of the building more water compatible), and mitigation (by reducing the properties exposure).

He draws attention to numerous products that can be used to restrict water entry, as well as ways to make walls, floors, electrics, plumbing, kitchen and furniture/fittings more flood resilient. More significant interventions are also included, such as raising floor levels, adding stories and lifting entire buildings. Across all of these interventions, Barsley seeks to reduce the disruption that victims of flooding suffer and get people safely back to normality much faster than is currently the case.

This year, many of Barsley’s graphics will be incorporated into the U.K.’s new national guidance, the Property Flood Resilience Code of Practice (CoP) which he believes could be a key driver in influencing behavior change. "We need to start rewarding resilience and I very much hope the Code of Practice will enable the industry to do so," he says.

Flood water can carry nasty contaminants and sharp debris, and when moving at speed, even a shallow amount can knock you off your feet.

Having spoken to numerous communities affected by flooding, Barsley also realized the importance of safe movement during a flood. "Flood water can carry nasty contaminants and sharp debris, and when moving at speed, even a shallow amount can knock you off your feet. So we need to adapt infrastructure networks and consider how people can move safely during such conditions."

Within the Yalding study he explored the potential of retrofitting a raised walkway in parts of the village to avoid residents getting trapped in their houses or wading through dangerous floodwater.

Barsley feels that resilience is on a similar journey to that of the green building movement. "More innovative materials, products and designs are coming onto the market so resilience shouldn’t be seen as a compromise; it’s just good practice," he says.

Barsley emphasizes the importance of joined-up strategies from the street to the community level and beyond to entire catchment areas. He supports the U.K.’s growing use of natural flood management but also highlights other key international precedents such as the CU Centenary Park, designed by Landprocess in Bangkok, in which a range of flood management strategies are used to make space for and absorb excessive rainfall and surface water flows.

"Retrofitting for Flood Resilience" is already receiving high praise. Emma Howard Boyd, chair of the Environment Agency and U.K. commissioner to the Global Commission on Adaptation, said at its launch: "We’re at the start of the climate decade. The ideas in this book are absolutely key to what we should be doing."

Barsley is working on turning the book into a TV series. 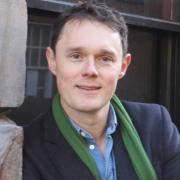 See all by Tom Almeroth-Williams