How can cities quit their fossil-fuel addiction?

Did you know that despite being the homeland of many environmental nonprofit groups, American cities depend on coal more than the cities of any other continent besides Africa?

Latin American cities, on the other hand, are the greenest, deriving 72 percent of their power from hydroelectric plants.

London still holds to its Dickens-era reputation as a city of coal soot: 40.7 percent of its energy is derived from coal plants.

And New York City, regardless of its progressive aspirations, gets 78 percent of its power from fossil-fuel source natural gas.

These are the data-points that emerge from CDP’s data released today (scroll down for the infographic) about power sources used by 162 of the world's largest cities, or those that responded to its city energy report.

According to the data collected, Reykjavik, Iceland, could be characterized as the cleanest city in the world because it gets 70 percent of its power from hydro-electricity and 30 percent from geothermal sources.

These are not insignificant details. Cities account for 78 percent of the world’s energy use, and power generation is the main way they use it. Therefore, said CDP, “Untapped potential in cities can significantly accelerate a global shift away from fossil fuels.”

Learn more about cities and renewable energy at VERGE San Jose, Oct. 26 to 29.

Indeed, power generation emits more carbon than any other human activity, producing 12.6 gigatons of carbon dioxide a year, CDP estimated. If current trends continue, that amount could double by 2040. We’ll all be choking on the stuff.

Kyra Appleby, CDP’s head of cities who lead the research on the city survey, said data held some surprises.

“Looking at the current state of energy mix in cities, especially by region, what surprised me that they are just so different,” she told GreenBiz. 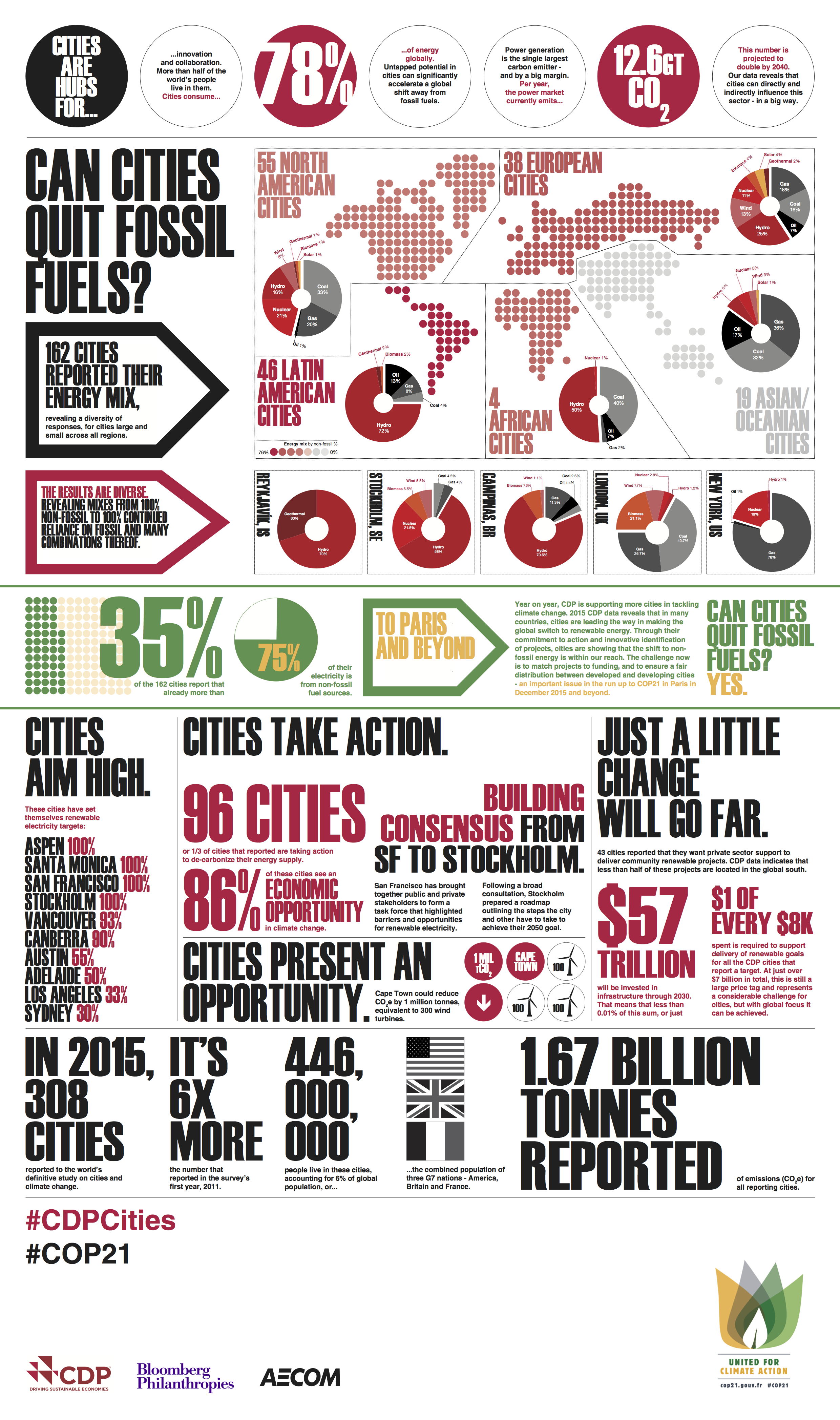 Hydro-electricity is the main source of power to a majority of the world's cities. But in the already developed world, there remains a big reliance on fossil-fuel sources coal and gas. So much for talking developing countries out of depending on coal.

Appleby said what cities do is important because they contain the bulk of the world’s population and use most of its energy. That is why CDP does the survey. But this year more than most, cities will draw attention to their sustainability plays.

“There’s been a huge focus on non-state actors leading up to the Conference of Parties (COP21), so people are really starting to take notice of the action and power that cities have and the difference they can make,” Appleby said.

People are really starting to take notice of the action and power that cities have.