Carnegie has been on a seven-year journey to create the world's first bio-based interior textile that doesn't compromise performance, value or aesthetics.

This isn't the only first for the global textiles manufacturing giant. The family-owned company was also the first -- and still the only -- company in its industry to go completely vinyl-free.

In 1981, Carnegie introduced a polyethylene (PE) textile under the brand name Xorel that, at the time, was one of the few healthier alternatives to vinyl (PVC) for interior panels, wall coverings and upholstery. Thirty years later, that product has received an eco-friendly update with the launch of BioBased Xorel, an interior textile made from plants.

McDonough Braungart Design Chemistry (MBDC) recently sat down with Cliff Goldman, Carnegie's president, to discuss the company's commitment to constant improvement and the multi-year journey to redesign its flagship product.

Tish Tablan: Tell me more about the recent changes you have made to the established brand, Xorel.

Cliff Goldman: We worked for seven years to design BioBased Xorel, which is now the first high-performance interior textile in the market with a majority of plant-based content. Depending on the pattern, BioBased Xorel is comprised of 60-85 percent polyethylene sourced from sugarcane instead of fossil fuels. Our three most popular designs -- Strie, Nexus and Dash -- are now only offered in the plant-based version and we rolled out three new patterns for the launch as well. Currently we are selling both the original Xorel and BioBased Xorel as options, but our goal is to source the polyethylene for the entire product line from plants in three years.

We achieved this while keeping the price, aesthetics and performance exactly the same. We were not willing to make any compromises, and that is why it was a seven-year process. We were careful to make sure that the new material would still meet all the high expectations that both the company and our customers already have for the brand.

Tablan: What are the advantages of sourcing the product from sugarcane?

Goldman: Using a rapidly renewable material reduces our company's dependence on the planet's finite fossil fuels resources. I have seen estimates that manufacturing ethylene with sugarcane uses 60 percent less energy and generates 40 percent less greenhouse gas emissions when compared to making petrochemical ethylene. Furthermore, growing the sugarcane plant naturally captures carbon dioxide. Producing a ton of sugarcane PE takes 2.5 tons of carbon dioxide out of the atmosphere, and it will stay in the soil even after the sugarcane plant is cut down.

Sugarcane also had advantages over other bio-based options, such as corn. Sugarcane has a much higher yield per acre than corn and it generally doesn't require genetic modification.

Tablan: What was the process for achieving this sustainable innovation?

Goldman: Carnegie's culture has always been focused on constant improvement and it is just in our nature to keep doing things better. We even made "In Our Nature" the slogan for the launch of this product because it represents how we do business. We launched Xorel more than 30 years ago as a more sustainable alternative to vinyl. Once we understood the issues related to PVC, including links to cancer, we felt it was the right thing to do to get rid of it altogether. However, what we are doing today should never be good enough.

We used the Cradle to Cradle certified program as a roadmap to guide our continuous improvement. In 2007, Xorel was Cradle to Cradle certified at the Silver level. That was an important step for us that provided validation of our decision to be PVC-free, a requirement in the program. We were recognized for the use of a highly recyclable material, as well as our responsible return program that accepts the return of unbacked product for recycling with HDPE streams or paper-backed product for energy generation.

We then set a goal for the new BioBased Xorel to be awarded certification at the Gold level. The certification process provided us with a toxicity assessment of all of our materials, recommendations for improvements, and defined targets to achieve. We were able to meet the rigorous Gold level criteria with the launch of our product this summer, and we are excited that Cradle to Cradle Certified Gold products can now contribute to two credits in the recently approved LEED v4 rating system. 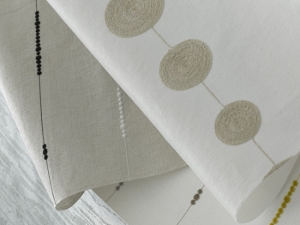 Tablan: Were other sustainability improvements made in the design and production of BioBased Xorel?

Goldman: In order to move up from the Silver level to the Gold level of certification, all of our product ingredients were evaluated against the demanding Cradle to Cradle standards and verified to have no materials of high risk to human and environmental health. We worked with MBDC to make sure that all of our choices for materials, colorants and additives were safe for human and environmental health. Our plant in Europe was using 100 percent renewable energy, which is double the requirement for certification at the Gold level, and sourcing from a combination of hydropower and solar panels on the roof. We also audited our water systems and social practices and created a strategy to continue to improve those as well.

Tablan: What are the next steps for Carnegie on its sustainability journey?

Goldman: One issue we are concerned with is the overuse of textile finishes. While many clients see them as a maintenance panacea, the reality is that the use of these finishes is often not necessary and the additional chemistry adds to the environmental footprint of a textile. Carnegie is working to educate its customers on getting the maximum performance with the least environmental impact.

Carnegie also has been involved in the development and promotion of Thermoplastic olefin (TPO) technology for solid surfacing wallcoverings. This technology is rapidly improving and affording designers the option of specifying beautiful, high-performance materials as an alternative to PVC products. On the Xorel product side, we are immersed in developing new backing technologies with a reduced footprint and hopefully creating a way to take back the product in the future and recycle it back into new Xorel material.

The best tools for using healthier materials in your products

A closer look behind the walls of product transparency

Why Dell and Steelcase are using mushrooms and agricultural waste

The Energy Efficient Path to 100% Renewables