More big companies are going on a food waste diet.

As of last week, 10 of the world’s largest food concerns, including Mars, Unilever and General Mills, had pledged to weigh in publicly about the success of their programs to reduce spoiled produce, grains, meat and other nutritional staples across distribution centers, on store shelves and in customers’ homes. Estimates suggest 90 or so agribusinesses are collecting data against these metrics, even though they aren’t sharing them publicly.

These revelations come three years after the United Nations called on the world to slice food waste in half by 2030 — motivated not just by the human tragedy of this weighty issue (the World Health Organization blames malnutrition for one in three child deaths) but also by the weighty impact on greenhouse gas (GHG) emissions (an estimated 4.4 billion tons annually comes from the methane created by decomposing food).

During that timeframe, close to two-thirds of the world’s 50 largest food companies have whipped up food loss and waste reduction targets, according to a progress report (PDF) issued last week by Champions 12.3, a coalition of businesses, governments and researchers focused on addressing this weighty issue. Among the most active proponents of new reduction recipes: Campbell Soup, Danone, Kellogg, Kroger, Nestle, Sodexo, Tesco and Walmart.

"No company has yet to announce that it has halved food loss and waste in its own operations," the report noted. "However, some companies have halved food waste in certain operations, and there are a number of companies reporting impressive reductions across their whole operations."

But it isn’t just food growers or producers that are mixing up their menus.

Major institutional suppliers such as Aramark and Sysco are biting into the problem, as are quick-serve restaurants and café operations such as Chipotle and IKEA, big hotels such as MGM, web food delivery startups such as HelloFresh and corporate food services teams, including at tech giant Microsoft.

"We are seeing a big uptick in the number of food service organizations that are getting turned onto this problem," said Alexandria Coari, director of capital and innovation for ReFED, a multi-stakeholder coalition focused on encouraging policies and technologies that can sate this problem. "We believe that technology and innovation are the primary levelers in trying to address this."

Sysco, for example, is one of the earliest accounts for Spoiler Alert, a technology startup from Boston that helps food service organizations manage their unsold or unused inventories. Its application plugs into warehouse management systems to figure out what’s available, establish pricing levels and suggest donation options, explained co-founder Emily Malina, the company’s chief product officer.

HelloFresh is another SpoilerAlert customer. During initial tests of its service, the meal-kit company decreased its landfill-bound organic waste by 65 percent and nearly doubled the percent of unsold inventory that made it to charities, according to Malina. In September, HelloFresh expanded its use of the technology to all of its U.S. operations. "Companies work with us because they recognize that better loss management is a way to maximize their profits," Malina said.

Here's what we know about the problem and the solutions

If we were to pile all the food wasted globally on an annual basis — an estimated 1.6 billion tons — we’d need a plate that could accommodate 10 times the mass of Manhattan, estimates a new analysis by the Boston Consulting Group (BCG). By 2030, the amount could expand to 2.1 billion tons per year, in the absence of meaningful action.

Waste occurs across the entire value chain: from crop production to handling and storage to processing and packaging to distribution and retail to the point of consumption. Addressing those gaps represents a $700 billion opportunity, noted Shalini Unnikrishnan, a BCG partner and a report co-author. "We don’t see this as a tradeoff, but rather a responsibility that can create change and advance business objectives," she said. 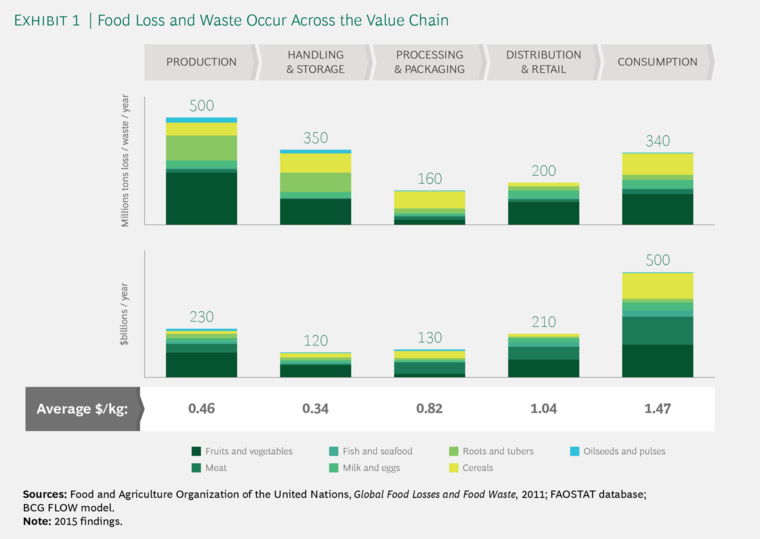 Early solutions emerging to eliminate points of waste can be roughly organized into 13 areas, some of which are summarized and illustrated with specific corporate examples below. (For the purposes of this article, I opted to focus exclusively on what happens after the point of harvest, production and processing.)

Many of these approaches require collaboration to be effective. "This problem is too interconnected for any one entity to solve on its own," Unnikrishnan said. 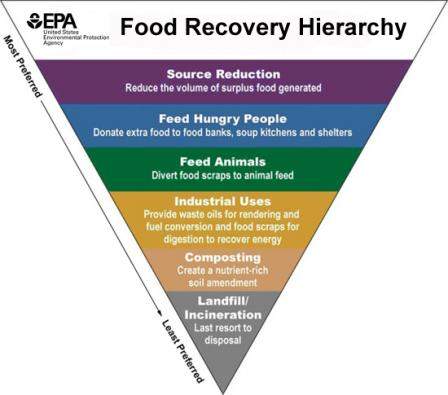 Source reduction is the first line of defense against food waste, according to the list of what the Environmental Protection Agency considers to be the most preferred or most effective strategies for recovery. At the point of consumption, that could mean educating consumers about storage practices, encouraging reduce portion sizes or introducing new recipes that help people use more of what’s traditionally discarded during prep. When it comes to recovery, donation programs to feed the hungry are at the top of the pyramid while composting strategies are near the bottom, according to the EPA.

"Changing consumer behavior and cultural expectations is the biggest challenge with all of this," ReFED’s Coari said. "What we consider to be waste is quite a challenge."

Many hospitality organizations have had food donation programs in place for many years, but an initiative embraced in early 2018 by MGM Resorts International in Las Vegas offers an example of how these initiatives can become embedded more deeply into the practices of an expansive food service operation.

Its program, developed in collaboration with the Three Square Food Bank, has reengineered how MGM employees collect and preserve surplus banquet food, in particular. It expects to donate more than 1.7 million pounds (or 1.4 million meals) through the program by 2020, according to Yalmaz Siddiqui, vice president of corporate sustainability for MGM.

"When we started piloting this program in 2016, the process has expanded to include from additional sources including warehouses, kitchens and minibar operations, and now encompasses multiple food types," he wrote in response to questions about the effort. 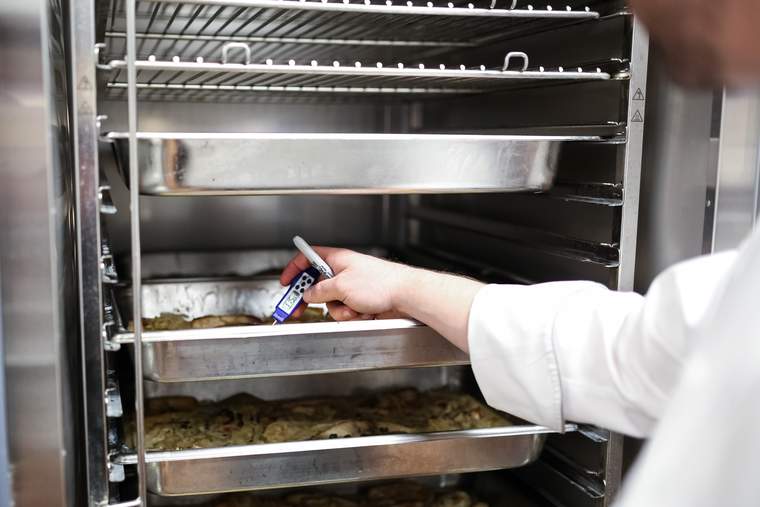 MGM/Three Square
Food is temped to make sure it is at proper temperatures for safety.

Central to scaling the effort was an investment in blast chillers, equipment commonly used in commercial kitchens to quickly cool down large quantities of hot food so that they can be stored safely. This approach allows MGM to freeze and inventory more donations than in the past, rather than being forced to deliver them immediately to hunger relief organizations.

Because food donations are usually limited to a discrete geographic region, the long-term vision is to replicate this model in collaboration with aid agencies in other cities or at MGM’s regional resorts, once the kinks are worked out. Ultimately, the hope is to share best practices with other hospitality or food service organizations, so that this program can be scaled.

"The frozen, inventoried food is placed in a computer software system that allows local non-profit agencies to order food based on their need," Siddiqui wrote. This was not previously possible.

Getting smarter about consumption

Many ingredients of quick-serve restaurant chain Chipotle’s food waste strategy are focused on very straightforward changes to prep — such as using all of the meat of bell peppers and cutting a "V" into the base of romaine lettuce to use more of its head.

But investments in better inventory management are central to minimizing overprep and maximizing the use of what’s already around. The organization already uses a system that keeps tabs on prior sales, what on hand and other unique metrics that could affect customer appetites. It’s also looking into software to manage food donations, according to Caitlin Liebert, director of sustainability for Chipotle.

The chain has pledged that by 2020, 80 percent of its locations will participate in the Harvest Program, a food donation network. "We are looking at some ‘on-demand’ technology for donation," Liebert wrote, in response to written questions about its diversion strategy. "The barrier with these on-demand systems is often the cost of the applications/donations, but hopefully the more competitive that space gets, the more the cost will be driven down."

As you might expect, software and analytics are at the center of Microsoft’s program to mitigate food waste across its headquarters site in the Seattle area: More than 90 dining "destinations" are on the Puget Sound campus, which serve more than 40,000 meals daily.

According to Katie Ross, sustainability program manager of real estate for Microsoft, the company tracks food consumption data from cash registers, purchase records and waste logs to drive better decisions about what to procure. For example, the amount of roast chicken prepared but not consumed each day is near zero, she noted.

Artificial intelligence is also a factor in the strategy: By capturing images of what’s headed for composting and analyzing them, the food operations team is able to adjust orders more quickly. Elsewhere, Microsoft is tapping location information about where employees are congregating — using both signals from personal electronics divisions as well as ceiling-mounted sensors to help prevent overproduction.

Our top 10 clean economy and climate change stories of 2018

The business case for composting from Whole Foods, MGM & BofA