Reverse-vending machines may be just what the market needs to bring circularity to disposable bottles.

"Society is telling us in unmistakable terms that we share equally with the public the responsibility for package retrieval and disposal. This industry has spent hundreds of millions of dollars in the attempt to dispute, deflect or evade that message."

—Dwight Reed, president of the National Soft Drink Association, in 1980

The linear economy of extraction-production-consumption-wastage has resulted in mountains of trash in cities worldwide and the suffering of people and the planet, but proven solutions for eliminating plastic pollution can be implemented now.

As the world grapples with the growing problem, the benefits of creating a circular economy, where all plastic products and packaging are replaced by benign alternatives or are recycled, are appealing. But the high cost and complexity of reclaiming single-use plastic items renders recycling largely impractical.

The U.S. Environmental Protection Agency reported that of all plastic made in the United States in 2015, only 9.2 percent made it to recycle centers. We estimate that the plastic recycling rate in the United States will to sink to about 4.4 percent in 2018 because waste plastic does not have sufficient value to drive recycling rather than disposal. The U.S. plastic recycling rate could drop to 2.9 percent if the proposed Basel Convention amendment passes or if other Asian countries join China in banning plastic waste imports.

Can we recycle our way to a circular economy? As the equivalent of one large dump truck of plastic trash enters the ocean every minute of every day, urgency to act is tremendous.

Can we recycle our way to a circular economy? As the equivalent of one large dump truck of plastic trash enters the ocean every minute of every day, urgency to act is tremendous.

We need to start with direct, express-lane routes to recycle or eliminate specific plastic products or packaging. Realistically, if many single-use plastic items remain a low-value material and become litter, they should be eliminated from use. Plastic straws, plastic bags and expanded polystyrene foam food containers quickly fall into the better-to-eliminate category worldwide, as described in the 5 Gyres Institute’s 2016 Ban 2.0 List (PDF).

For higher-value plastic materials, such as food-grade polyethylene terephthalate (PET) beverage bottles, we can collect and recycle them at global scale, as we do for aluminum cans, because they possess inherent value in the material itself. But making recycling dependent on the market value is a recipe for failure, as the profit margins for recyclers are very slim and are stressed by low commodity values for contaminated plastic.

Studies prove that product-focused collection and recycling programs, such as container laws or "bottle bills" in California and Michigan, outperform mixed recycling systems typically run by municipalities. But beverage companies have fought hard to end bottle bills around the world because the linear economy of "bottle it and forget it" is vastly more profitable than taking responsibility for recovery and reuse of bottles.

Plastic bottle waste has become a taxpayer problem in countries without waste management systems. Outside of a few countries, beverage bottlers largely have shifted the costs of negative externalities of plastic bottle pollution to the public. As the removal of trash cans from public spaces grows, due to costs and security issues, and new infrastructure investment is widely and intractably insufficient, it’s time to admit that municipal waste management alone fails to stem plastic pollution. There is simply too much of it, and taxpayers and city leaders are growing weary of subsidizing the management of poorly designed, wasteful products and packaging.

Reverse vending succeeds and is spreading

Incentivized reverse vending — let’s call it IRV — succeeds in stopping plastic bottle pollution and is gaining attention around the world. IRV offers consumers an attractive reason to return their containers for recycling. It is a proven method to collect a clean stream of PET beverage bottles and is helping communities in Lithuania, Turkey, Australia and other countries reduce litter and collect high percentages of beverage containers.

When mandated by container laws, IRVs offer a convenient way for consumers to return their bottles and claim deposit refunds. Voluntary IRV programs, led by nonprofit and private-sector groups, are also beginning to spring up in diverse locations. Incentivized by cash refunds, donations to charity, metro transit tickets, paid telephone cards or discount tickets to amusement parks, consumers willingly return their empty bottles to collection machines. Fewer PET bottles are littered and a cleaner stream of material for recycling is created.

We’ve created an online global map showing IRV programs around the world. Key elements of each program and references are provided. To highlight the countries with the greatest need for IRV implementation to stop the pollution of plastic bottles into the environment, the rate of plastic waste mismanagement is shown for each country on a data layer.

The plastic waste mismanagement data was estimated by Jambeck, et al., in their groundbreaking "Plastic waste Inputs from land into ocean" study published in 2015. Jambeck defines mismanaged waste as "material that is either littered or inadequately disposed. Inadequately disposed waste is not formally managed and includes disposal in dumps or open, uncontrolled landfills, where it is not fully contained. Mismanaged waste could eventually enter the ocean via inland waterways, wastewater outflows and transport by wind or tides."

To highlight an example of the critical need for IRVs, India has an 85 percent waste mismanagement rate, with estimated flows of 600,000 metric tons of plastic waste mismanagement in 2010 and a projection of 2.9 million metric tons in 2025 if plastic waste collection is not improved. The Indian state of Maharashtra has enacted an ordinance requiring manufacturers to create a buyback mechanism for plastic beverage bottles. Pepsi has begun a reverse-vending program, but other beverage manufacturers reportedly have not taken action yet. Need is urgent for beverage manufacturers and retailers to implement and operate IRV systems to collect plastic bottle waste across all of India. 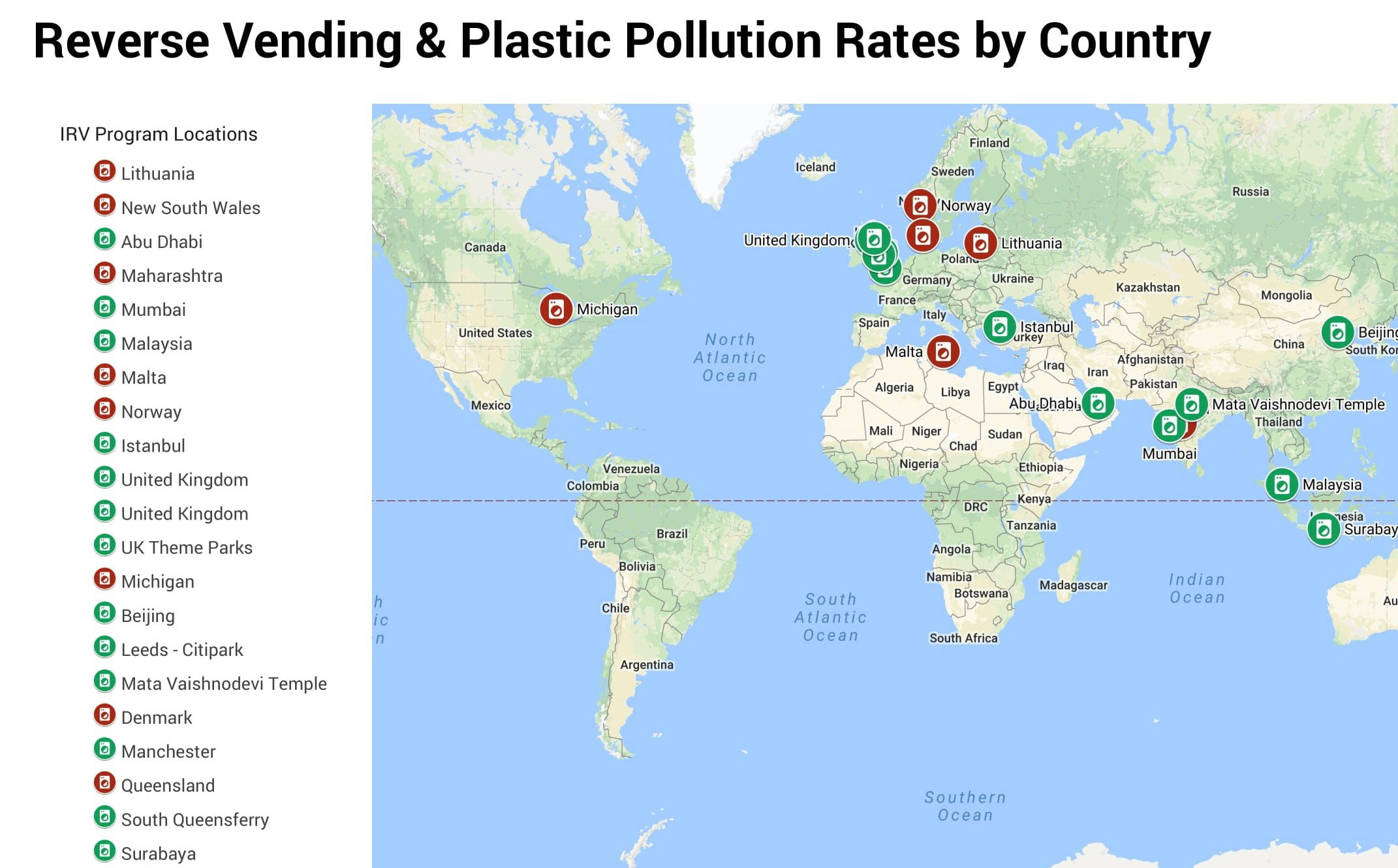 IRV succeeds because it overcomes two longstanding challenges: achieving high collection and low contamination rates. According to Coca-Cola, "One of the main problems with recycling PET is the limited supply of good quality, food-grade PET on the market." According to CalRecycle, cleaned, recycled PET is in great demand for spinning fiber for carpet yarns and producing food and non-food containers, among other uses. The PET industry itself sees the need for new approaches. In 2015, the U.S. National Association for PET Container Resources stated, "With demand for clean recycled polyethylene terephthalate (rPET) outpacing supply, the plastics industry needs to innovate now to solve its challenges and improve utilization."

Incentivized reverse vending is the solution to increasing the availability of food-grade rPET, improving use of PET bottles and reducing PET bottle pollution. Once a PET beverage bottle enters the environment as trash, the probability that it will be collected and recycled decreases exponentially as the cost and complexity of doing so increases. In countries where people make a living by scavenging waste piles for PET bottles, the waste scavengers could be organized and trained to collect bottles from and maintain the reverse-vending machines. Jobs created from reverse vending would offer waste scavengers better working conditions and the opportunity to learn valuable skills.

Now is the time to speed the implementation of incentivized reverse vending globally because IRV is a proven success story for the planet, governments, businesses and consumers. It’s clear that continuing to rely on insufficient or nonexistent municipal waste systems will not reduce plastic bottle pollution, will continue to be an unfair financial drain on taxpayers and will not reclaim the missing 240 billion PET bottles per year.

Legislators: It’s time to enact smart waste policy that requires beverage producers and retailers to take responsibility for collecting the plastic bottles that they make and sell before the bottles become waste. By making IRV legislated policy, the playing field is leveled and no beverage bottling company has the unfair advantage of doing nothing. The beverage producer and retailers should be required, as a part of their business license, to implement and operate incentivized reverse vending wherever they sell products. As shown in the successful examples, incentive options exist and the best incentives should be designed with local cultural and community needs in mind.

Companies: This is the moment in history for beverage and retail companies to voluntarily choose to replicate incentivized reverse-vending programs around the world to reclaim their PET bottles, reduce litter and achieve their commitments to the public. Global beverage companies publicly have stated that they will be working over the next seven to 12 years to produce plastic bottles to be more recyclable and use more recycled plastic in their beverage bottles.

But it doesn’t matter if the PET bottles are recyclable if they are not collected for recycling. IRV is the proven way to collect PET bottles and achieve company goals. Companies have the capacity to collect the 240 billion lost PET beverage bottles per year. As more nations adopt Extended Producer Responsibility laws that hold brands responsible for their packaging, IRV is a tool for branded bottle recovery.

IRV is easy for companies to implement because beverage and retail companies are experts in the critical elements of the IRV concept.

IRV is easy for companies to implement because beverage and retail companies are experts in the critical elements of the IRV concept: They know how to design, install and maintain vending machines, they’ve run many nationwide prize contests, they have direct communication channels with consumers, they study and seek to influence consumer behavior and their expertise in the forward logistics of delivering bottles to stores and vending machines can be applied to the reverse logistics of picking up bottles. Reverse vending offers benefits to retailers through increased customer visits to stores.

Why should beverage and retail companies voluntarily embrace IRV, as these companies have worked around the world against bottle bills for decades? Because the world has woken to the harms of plastic pollution, and we’ve traced it back to its source. Just as bans on plastic straws and bags are spreading, deposit laws are being enacted in a growing number of countries. To legitimately influence the legislation to be most effective and practical to manage, companies can act now and implement a voluntary IRV that works in every country that they sell beverages in plastic bottles.

Consumers and Citizens: Governments and companies will speed their actions when we demand it.