Climate change is one of the biggest challenges the world has ever faced. Flooding, storm surge, and sea level rise are serious threats to natural resources, infrastructure, and human communities in coastal areas.

In effort to adapt to these changing conditions, planners and policymakers should consider nature’s strategies when developing coastal resiliency plans to protect communities from increasing coastal erosion and flooding due to rising sea levels.

For example, green infrastructure like wetland and sand dunes can be used to break up the waves and reduce their speed, reducing the waves’ erosive power. These approaches can also limit the area which waves can reach, preventing flooding.

The recent Paris agreement sets out a global action plan to put the world on track to avoid dangerous climate change by limiting global warming to below 2°C. However, given the high concentration of carbon dioxide already in the atmosphere, the climate will continue to change, impacting both human communities and the environment. 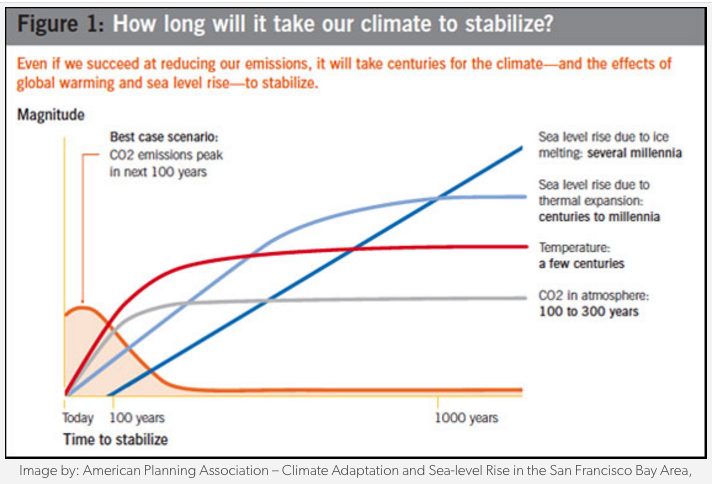 Since 1870, global sea level has risen by about 7.5 inches. Estimates of future sea level rise vary for different regions, but studies project global sea level to rise by another 1 to 4 feet by 2100, with an uncertainty range of 0.66 to 6.6 feet.  It is now widely accepted that the world’s coastlines and coastal cities will be faced with seas that are rising faster than ever experienced. In California, we are very likely to experience a sea level rise of 16 inches by 2050 and 55 inches (1.4 meters) by 2100.

The potential impacts from sea level rise to the state of California’s economy and infrastructure include projected impacts on coastal agriculture, the fishing and aquaculture industry, tourism, ports, roads and bridges, and water and power infrastructure.

Public agencies need to develop and implement viable adaptation strategies plans to mitigate climate change impacts. California water agencies will have to deal with changes in flow, facilities at risk, and saltwater intrusion into intake systems.

Airports and ports will have to contend with shoreline infrastructure that is not at the right sea elevation. For example, the ports of Los Angeles and Long Beach are vulnerable to significant flooding from sea-level rise. Given that these two ports handle about 50 percent of the containers shipped into the United States, the rise could disturb the efficiency of goods movement, resulting in serious economic implications for California and the country.

Transit and transportation agencies will be faced with roads, railways, and subways vulnerable to flooding. Parks, planning agencies, and coastal cities will have to tackle the issue of  floodwater in industrial and residential communities, especially in those areas that are least prepared to cope with these new risks, such as disadvantaged communities.

Ultimately, it is going to be up to local governments to ensure that their communities adapt to this new reality.

Ultimately, it is going to be up to local governments to ensure that their communities adapt to this new reality.

Most local governments in California have what is called a local coastal plan (LCP), which sets ground rules for land use in coastal zones, as described by state law. These plans are certified by the California Coastal Commission, which has planning, regulatory, and permitting responsibilities, in partnership with local governments (60 cities and 15 counties), over all development taking place within California’s 1,100-mile coastal zone.  About 90 percent of the state’s coastal zone falls into an LCP.

However, most of these plans were developed in the 1980s, before potential sea level rise became a growing concern for coastal communities and there is no legal requirement for them to be updated.

What can we do?

There is a range of strategies coastal communities can use to manage changing sea levels, from armoring the shoreline (building massive man-made seawalls) to abandoning low-lying development altogether.

Beach armoring, especially in the form of seawalls, is known to increase wave reflection and result in narrowed beaches. Instead, communities can protect and restore critical habitats, such as wetlands and sand dunes, and plan out a buffer zone so that wetlands and dunes can migrate inland while providing inland infrastructure with natural shoreline protection.

Although some adaptation measures have up-front costs, the cost of inaction may be greater in the long term. Many adaptations, like restoration of salt marshes, yield benefits independent of climate change. Ultimately, efforts to protect and restore a healthy coastal ecosystem have ecological and economic benefits, like providing a critical habitat for a range of organisms (including the federally endangered Tidewater Goby and the Belding’s Savannah Sparrow, listed as endangered by the State of California), and filtering contaminants from the water, helping to keep our beaches clean and swimmable.

Many adaptations, like restoration of salt marshes, yield benefits independent of climate change.

Over the last couple years there is growing interest by the California Coastal Commission to spend more resources to restore and reestablish wetlands, estuaries, and marshlands along the California coast. This is a politically challenging issue and has been highly contested by coastal residents, especially in prosperous communities.

Often local coastal governments and long-range planners are in denial, thinking we can engineer ourselves out of sea rise by building complex flood prevention structures and/or systems. We need to actively educate policymakers and coastal planners about implementation solutions that will lead to more environmentally sound, nature-based adaptation strategies that focus on regenerative and restorative coastal habitats. These approaches will increase coastal communities’ resiliency to natural disasters such as sea level rise and storm surge and as well from other water-related disturbances.

If we don’t make changes to our coastal management practices, we will end up with unreliable, costly, and ineffective management solutions that will continue to undermine the social, economic and ecological viability of coastal communities. This may seem like common sense, but we as humans have a legacy of often working against natural systems, rather than with them.

Oceans have immense power to erode land over time and gobble human development rapidly. The common strategy is to build seawalls in effort to control the sea’s erosion and protect coastal communities. However even the most complex manmade protections (e.g. seawall, levies, sand replenishment) will eventually fail.

On the other hand, nature’s strategies have shown long-lasting adaptation and resiliency against ocean forces in environments such as red mangrove forests, salt marshes, sand dune grasses, and coconut tree forests, all providing a similar function —  shoreline protection. These ecological systems act as a buffer, preventing coastline erosion due to their ability to absorb the energy created by ocean currents, which would otherwise degrade a shoreline.

Policymakers and planners need to foster and implement adequate policies and strategies that are sustainable, cost-effective, adaptive, regenerative, and resilient to whatever change in sea level the future brings.

It's time to get practical about sea level rise