In the wheat fields of eastern Michigan, third-generation farmer Justin Krick is using electronic-soil-reading gadgets and GPS mapping that his father and great-uncle say they never needed — but appreciate now.

The precision agriculture devices made by Syngenta allow Krick to vary nutrient and water management field-by-field, depending on data about soil type and saturation levels, rather than use a one-size-fits-all approach for the farm’s 1,200 acres.

“That greatly reduced the amount of fertilizer needed because it is only placed in certain fields now. That’s been a real big thing; it cuts down on the amount we need,” Krick said. And it has two major results: “a cost savings to the farm, but also sustainability because we are not overapplying anything and we are able to get maximum yield.”

The Krick family supplies soft white winter wheat to Kellogg through the local Star of the West Milling Company. Kellogg's uses this Michigan wheat to make its Mini-Wheat cereals.

As a partner in the Kellogg Great Lakes Origin program, Krick and Star of the West Mill are also supplying pieces to a grand sustainability plan that not only is rippling through Kellogg’s supply chain in Michigan but has ramifications that might be heard in Paris at COP 21 in December. Businesses will be at the table this year when international delegates meet to forge a global carbon reduction agreement.

How did a soft-spoken farmer from a rural part of Michigan get tangled with diplomats and heads of state wrestling over climate change? For that matter, how have quinoa growers in Bolivia, cocoa growers in Cote d'Ivoire and rice farmers in Thailand get involved?

These farmers are all part of Kellogg’s effort to move sustainability through its supply chain. None of these farmers is a Kellogg employee directly. As is typical of food companies, the farmers sell to mills, which in turn sell to Kellogg. Even though Krick’s family has been supplying Kellogg for decades and has used sustainable practices of crop rotation and cover crops since way back, the contractual arrangement a company typically has with farmers makes supply-chain management challenging.

But Kellogg has committed, as a major food conglomerate, to help lead certain private sector efforts to set goals in the run-up to COP 21, specifically about how food companies can help prevent deforestation, lower greenhouse gas emissions and practice conservation.

To that end, in the Great Lakes region of the Midwest, Kellogg is directly involved with its farmers in two programs.

One is the Great Lakes Origin Program, through which Krick works with Star of the West and Kellogg in training other farmers how to use sustainable practices using precision tools and conservation methoeds. Those are the tools that collect data from the fields using sensors, map it out on coordinates and make that available via GPS mapping on tractors for the farmer in the fields.

In the second program, the mills, farmers, Kellogg and local government agencies jointly applied for a water conservation grant from the Department of Agriculture and are restoring the Saginaw Bay watershed through a Regional Conservation Partnership. That’s $10 million for sustainable practices.

“These kind of programs are really important to us because they promote sustainable practices and conservation practices,” said Diane Holdorf, Kellogg’s chief sustainability officer and vice president of environmental stewardship, health and safety. "They bring real value across the chain” of farmers, mills, processors and indeed Kellogg itself.

For the food giant with $14.6 billion in revenues, the value of sustainability is pretty clear; it depends on the earth and farmers’ ability to cultivate plants with care for its business success. 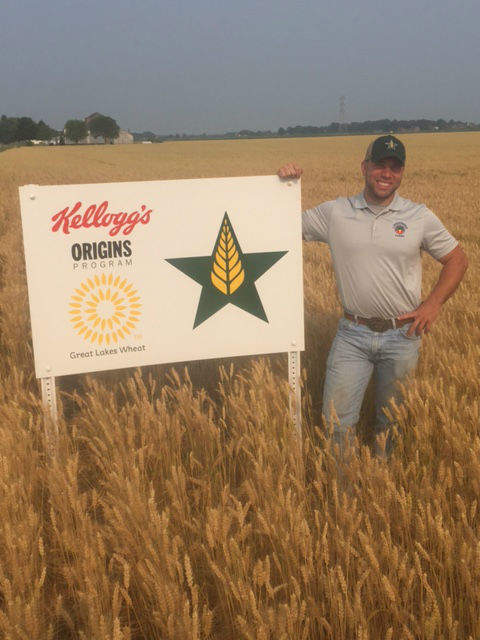 As a major player in the food industry, Kellogg has been drafted or stepped up to take a leading role in several business efforts involved in COP 21.

“Sustainable agriculture is such an important thing for any food company, so we have an important role,” Holdorf said.

Sustainability tools also have been introduced to farmers in Kellogg's supply chain in in Bolivia, Cote d'Ivoire, Thailand, Mexico and other places, she said. By getting involved directly in the localities where its supply chain farmers grow its ingredients, and supplying them data-collection tools and teaching conservation methods, Kellogg is able to track continuous improvement in sustainable farming prices, the company said. That, in turn, allows it to live up to a promise it publicly has made to source its 10 priority ingredients responsibly.

It is one of about 200 companies in the World Business Council on Sustainable Development, which have committed to support COP21 and take leadership roles in goals that businesses can pursue. The "We Mean Business" coalition of companies have committed to pursue some or all of seven goals.

Kellogg committed to be among leaders in three of these goals:

1. To adopt a science-based emissions reduction target in line with global effort at the heart of COP21 to limit the increase in global average temperature to 2 degrees Celsius.

2. Take part in responsible corporate engagement in climate policy, which means to help encouarge government decision-making and commitment to COP21, including governments where they do business.

The "We Mean Business" commitment include four other actions that some companies have signed onto and which Kellogg has not: procuring 100 percent of its energy from renewable sources, put a price on carbon in internal accounting, report all climate change risk in all financial reports such as 10-Ks and ridding operations of short-lived climate pollutants defined as methane, black carbon or hydro-fluorocarbons.

Kellogg does some of these things anyway, such as mitigating greenhouse gases from any sources, turning to renewables for more of its energy and considering climate change risks. Its 2020 Sustainability goals set higher targets for GHG reduction and renewable energy as well as waste mitigation.

Holdorf said that as a food company, it felt that deforestation and sustainable agriculture were the areas it should naturally lead.

"We are starting to lead around Climate Smart Agriculture," she said, and Kellogg executives have spoken at past UNFCC meetings about this.

Just what is Climate Smart Agriculture?

Climate smart agriculture, as defined by the United Nations and understood by those participating in the effort, looks at three core components to sustain agriculture, the land and the people farming that land way into the future.

Secondly, "It looks at resiliency in livelihoods," particularly those of farmers with small holdings of 10 acres or less and farmers in countries particularly vulnerable to climate change, such as Thailand, and what could help them thrive.

In sum, “we look at what are the needs of the growers on the ground and what are our objectives and what tools can we bring to bear on that" to address these three concerns, Holdorf said.

Preventing deforestation involves all three goals. Deforestation is a major contributor to the world's carbon emissions. But the reasons why farmers living on the edges of tropical rain forests in Latin America and Southeast Asia remove forests to plant crops is because there is market demand for those crops and they need to live.

Small — and some not so small — farmers have cleared forests to plant palm trees and whole palm oil plantations to feed the world's voracious appetite for palm oil. Kellogg has taken a big stand in the no-deforestation palm oil supply effort.

Kellogg helped establish an agreement for sourcing palm oil without deforestation, known as the Roundtable on Sustainable Palm Oil. Through it, companies commit to working with global palm oil suppliers to source fully traceable palm oil to known and certified sources that are environmentally appropriate, socially beneficial and economically viable, in adherence to what they call the Global Supplier Code of Conduct. Those principles designed to protect forests are:

• No burning in the preparation of new plantings, re-plantings or any other developments;

• Adherence to all relevant national laws, as well as RSPO or equivalent criteria.