In 2010, a partnership effort between Atlantic City Electric, New Jersey’s Division of Fish and Wildlife, and the Conserve Wildlife Foundation of NJ found a way to use utility rights-of-way to help the eastern tiger salamander adapt to climate change.

This is an excerpt from "Strategic Corporate Conservation Planning: A Guide to Meaningful Engagement" by Margaret O’Gorman. Published by Island Press.

The science is settled. Climate change is real. — from Exelon’s Corporate Sustainability Strategy 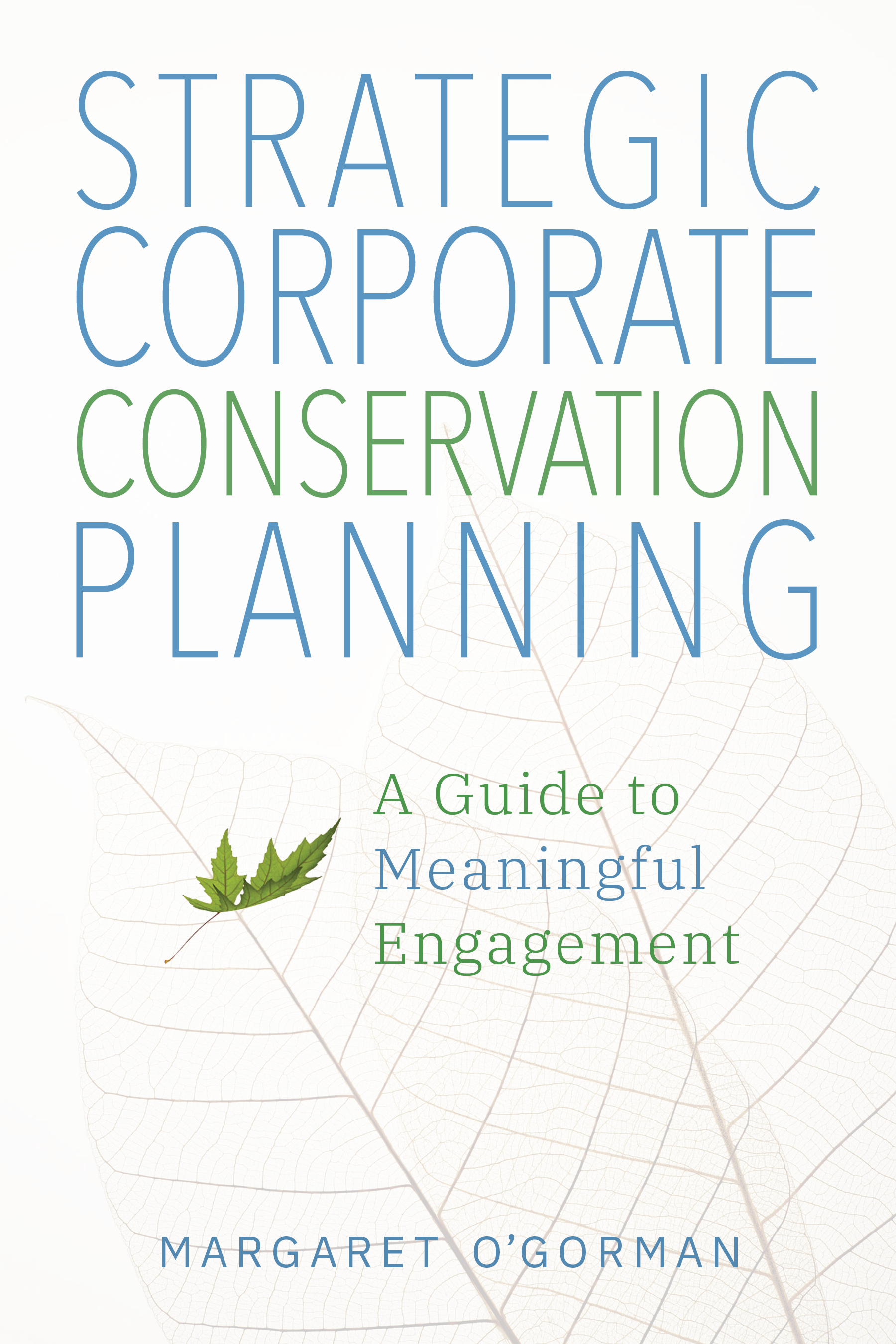 It’s simple. Industrial processes have caused the planet’s climate to change, impacting nature in many different and complex ways. A lot of energy and money has been put into denying and ignoring environmental change, but industry is slowly changing this approach in a variety of ways. The corporate world has a schizophrenic relationship with climate change. Many of the big emitters of greenhouse gases are implicated in understating and downplaying the impacts they have long known were imminent. Corporate leaders have actively lobbied against the federal regulations needed to curb carbon emissions and transition to a carbon-free economy. Even now, companies are being shown to undervalue their financial risk in a climate-changed world.

At the same time, many companies have established and published goals related to reducing carbon emissions. Many are retooling, researching, or investing to bring products and processes into compliance with a low-carbon future. Many companies are dependent on government action to support a transition to a low-carbon economy, although many are also dependent on government inaction to allow things to continue as they are.

In the corporate sphere of influence, the majority of climate action is focused on climate mitigation. The climate commitments of the largest companies are varied but do have one aspect in common: they are all focused on reducing their emissions of greenhouse gases and transitioning to a carbon-neutral business model. Car companies such as Toyota and General Motors have posted zero-emissions goals for their fleets and their factories, moving to electrify their products. But an electric car is only as "green" as the electricity that charges it. The move to electrification shifts the burden of decarbonization to the energy sector. In the energy sector, Exelon, stating that "the science is settled, climate change is real," plans to reduce its carbon emissions by 15 percent by 2022 by retiring its coal-fired plants and growing its investment in a clean-energy portfolio. In Ontario, the provincial government introduced the Clean Energy Act, which impelled and supported companies like Ontario Power Generation (OPG) to transition to clean energy. OPG’s transition caused the largest provincial impact on carbon emissions in Canada. It retired all of its coal-powered facilities, and today no coal is burned in Ontario. But this was not a painless transition. Consumers keenly felt its impact and cost, and in 2018 a new provincial leader swept into office on the promise to repeal the Clean Energy Act and halt over 700 clean-energy contracts previously awarded for wind and solar projects. The road toward a carbon-neutral world is winding and difficult, as easy wins are prioritized over longer-term goals and political shifts swing from inaction to action and vice versa.

The road toward a carbon-neutral world is winding and difficult, as easy wins are prioritized over longer-term goals and political shifts swing from inaction to action and vice versa.

One easy area to shift business-as-usual thinking, is for industry to leverage its own lands to help with climate mitigation, restoring lands to maximize their potential as carbon sinks and for adaptation, managing lands to enhance their resilience for both humans and nature. Using the power of nature for climate action is relatively simple, but it’s not commonly done, especially on corporate lands. Lands management can complement existing corporate climate transition efforts and offer benefits beyond climate concerns. While it’s important to be clear that lands-management efforts won’t make the most significant contribution to addressing a single company’s impact, they can also create positive outcomes for biodiversity, and empower employees and community members to take action on an issue that they may view as too big and too complex for their individual contributions to make a difference.

Cape May, New Jersey, is a famous location for nature lovers, known as one of the top birding spots in the world. In fact, many consider it to be the center of the birding universe. Almost half of all North American bird species have been recorded in Cape May. But this county in the extreme southern end of New Jersey is also important for species beyond birds. It is where many southern species of wildlife reach the northern extent of their ranges. Cape May County and indeed the entire state is classic edge habitat, as northern and southern species’ ranges overlap. Edge habitat allows range-restricted animals to move as their ranges expand or contract with mean-temperature increases. It is critical for biodiversity health in a changing climate.

A vernal pool is an intermittent wetland, dry for much of the year but filled with water during the spring, when the salamander needs to lay its eggs. The intermittent nature of the wetland means that few, if any, predators threaten egg development. When not in breeding season, salamander populations live in proximity to these ponds, carving out mini–migration corridors from the upland woods where they overwinter to the wetlands where they lay eggs.

Of 15 breeding ponds available to the salamander in Cape May County, one third are at risk of sea-level rise. Without a way to expand its range farther inland, the eastern tiger salamander is destined for extinction in New Jersey. In 2010, a partnership effort between local electric utility, Atlantic City Electric (ACE), a subsidiary of Exelon, the state’s Division of Fish and Wildlife (NJ-DFW), and a local nongovernmental organization (NGO), the Conserve Wildlife Foundation of New Jersey (CWF), found a way to use utility rights-of-way to help the eastern tiger salamander adapt to climate change.

Under ACE’s utility lines through Cape May, the partners worked to establish a succession of vernal pools, moving northward and away from the coast, to provide the salamanders with the habitat they needed to successfully reproduce and survive. They made depressions on the rights-of-way that could fill with rainwater during the late spring, when salamanders would lay their eggs. They removed some eggs from existing ponds and, in partnership with the Cape May Zoo, kept them safe from predators in order to increase survivorship and then placed the eggs in the new vernal pools, successfully establishing new communities of this population of salamanders.

This example shows the potential of partnerships between company lands and conservation professionals to help species adapt to — and, hopefully, survive — a world transformed by climate change. And yet approaches like this have been consistently overlooked in the conversations about climate action. Indeed, nature-based solutions have been largely ignored until the "nature for climate" movement launched in 2018, bringing a much-needed voice to the discussion. The result of the absence of nature-based solutions from the climate conversation is that corporate landowners lack guidance about how they can use their nonoperating lands for nature-based climate mitigation and adaptation. ...

Indeed, nature-based solutions have been largely ignored until the 'nature for climate' movement launched in 2018, bringing a much-needed voice to the discussion.

Having an understanding of frameworks like the CDP (formerly the Carbon Disclosure Project) or the various industry-specific efforts can help NGO partners craft a persuasive argument for integrating lands management into corporate climate efforts. ...

There is an enormous body of scientific research on the future impacts of climate change and how we might both reduce the impacts in the future and adapt to those impacts we can’t mitigate. The connections to the corporate world are crystal clear. The operational and financial impacts on industry are becoming real: from the lines for gas that formed in the northeast United States after Superstorm Sandy shut down refining capacity in 2012; to the Houston, Texas, area where Hurricane Harvey caused flooding, fires, and toxic releases from an underprepared chemical facility; to California’s largest electric utility, Pacific Gas and Electric, entering bankruptcy protection in 2019 to shield itself from liability for one of the deadliest forest fires in the state’s history. According to the Wall Street Journal, the PGE action could be viewed as the first climate-related corporate bankruptcy in the United States.