Next time I unwrap a candy bar, I'll think about sugar, free markets, the Florida Everglades and Monica Lewinsky.

Why? Because although the sugar in that candy bar may be natural, its price is entirely artificial -- depending, as it does, on government trade barriers, price supports and subsidized water, as well as the fact that the sugar industry is paying only a fraction of the costs of cleaning up pollution in the Everglades.

Put simply, crony capitalism is alive and well in the sugar business.

"The sugar industry doesn't make its money from agriculture," declares David Guest, a lawyer with Earthjustice and an outspoken critic of Big Sugar. "They make it from government."

That's an exaggeration, of course. The Florida industry grows lots of sugar, invests hundreds of millions of dollars in new equipment and employs thousands of people, as I learned last week during a day-long tour of the Lake Okeechobee region of south Florida, as part of the Society of Environmental Journalists conference in Miami. We met Guest from Earthjustice ("because the earth needs a good lawyer"), officials from Florida water agencies and the Army Corps of Engineers, an Audubon society biologist and, most interestingly, Judy Sanchez, senior director of public affairs for the U.S. Sugar Corp.

U.S. Sugar and Florida Crystals, which is owned by Fanjul family -- once described by Time magazine as the "First Family of Corporate Welfare" -- are the two biggest producers of sugar in south Florida. U.S. Sugar produces about 700,000 tons of sugar a year, about 8 percent of U.S. production. Sugar comes from sugar beets grown in the upper midwest, gives the industry political muscle from Miami to Minnesota.

Sugarcane is, for the most part, an environmentally friendly crop. It's a perennial that requires little in the way of fertilizers and pesticide. When pest controls are needed, they are usually natural, such as owls that are encouraged to nest in the fields because they can eat up to 1,000 times their weight in rodents each year. No part of the plant is wasted -- leaves and stalks are burned to generate the electricity that powers the sugar refinery. 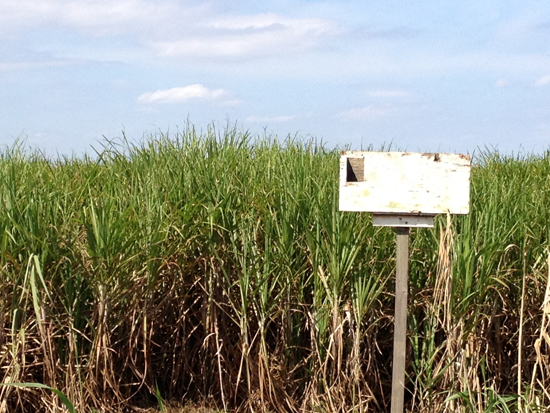 "Sugarcane needs basically two things -- sunshine and rain," Sanchez said. Florida has lots of both. So far, so good.

The trouble is, the rain is not evenly distributed throughout the year; it rains almost every day from June through October, and not much at all in the winter. During the dry season, farmers water for irrigation out of Lake Okeechobee to the north, after which the water flows south into the Everglades. As a result -- and this is a simple summary of a complicated story, about which books have been written -- the lake water contains high levels of phosphorus, a fertilizer, which threatens the Everglades, which are undergoing an $8 billion ecosystem restoration project, the largest in American history.

Sugar farmers, as part of the restoration plan, have been ordered to adopt best management practices to avoid the unnecessary use of fertilizers. On average, they have reduced the amount of phosphorus in their runoff by 55 percent, according to the South Florida Water Management District. But they're still adding to the problem, and discharging water that needs extensive and expensive treatment.

More than 52,000 acres of land south of Lake Okeechobee have been converted into man-made wetlands to treat the water, at a cost of about $1.5 billion so far. While the growers pay an "agricultural privilege tax" to support the project, it covers just a fraction of the cost, about $17 million a year. To be sure, upstream cattle and dairy farmers and property owners who fertilizer their lawns generate even more of the excess nutrients. Allocating the costs of cleaning pollution is never easy; in this case taxpayers foot most of the bill.

This is just one way that taxpayers support the industry. The federal government also sets a floor under market prices by providing loans to growers that can be paid back by turning sugar over to the government. Growers haven't had to rely on those supports lately because demand for sugar has been robust. "Since the economy has gone down, sugar consumption has gone up in the United States," Sanchez said.

Then there's what Sanchez called "border protection." No, this isn't about smugglers or illegal immigrants. What's being stopped at the border by by import quotas imposed by Congress is sugar from countries in the developing world, India, Thailand and especially Brazil, which grows more sugar at a lower cost than the U.S.

This is a sweet deal for Big Sugar and a sour one for the rest of us. Americans pay more for sugar -- two to three times more, according to a 2010 report from Citizens Against Government Waste, which opposes trade barriers. Even worse, candy makers have shifted production and jobs overseas to get access to lower priced sugar, according to a trade group called the Sweetener User Association.

I asked Sanchez how the quotas can be justified. She said they don't cost consumers much and protect an important domestic industry: "Sugar goes into all of our processed foods." America depends on other countries for oil and, she said, "the government doesn't want us doing that in sugar." Besides, she told me, other countries subsidize their own growers.

"We would love a free global market," Sanchez said. "Until we have across the board free trade, we don't see why the U.S. should dismantle its food production, which is the safest and most efficient in the world, and creates American jobs."

But if other countries want to subsidize sugar and sell it to us, why object? In effect, they're giving us a gift. If prices rise over time, we'll adjust. Who knows? People might eat less sugar.

The bottom line, though, is that while the U.S. is said to be a market economy, that's not so for sugar. And the rest of agriculture, and energy, and health care…but we digress.

And Monica Lewinsky? Well, on Presidents' Day in 1996, Bill Clinton told her that he "no longer felt right about their intimate relationship, and he had to put a stop to it," according to the Starr report. Later, Lewinsky recalled, this was the moment when the president got a phone call from a man named "Fanuli." White House records identified the caller as Florida sugar magnate Alfonso Fanjul Jr. Clinton and Fanjul spoke for 22 minutes, most likely about the fact that a few hours before, Vice President Gore had called for a penny-a-pound tax on Florida sugar growers to help restore the Everglades.

Says Guest: "That gives you a sense of the political influence they have -- to be able to interrupt the president at a moment like that."

The tax was never passed.