It was only a 20-minute flight, inland from the northern shore of Borneo. But the change in the landscape since my previous trip on the same route 20 years ago was staggering. Last time it was rainforest all the way. But in November, the trees were all gone. Almost the entire route between Miri, a port town in the Malaysian state of Sarawak, and the remote inland town of Marudi was laid out in rectangles filled with plantations of oil palm.

Who is to blame for this transformation? Is my tub of margarine or your jar of cosmetics made from the palm oil growing down here? And if we knew, could we stop the continuing tropical carnage?

The previous week I had been in Marrakech, at the U.N. climate talks, where NGOs launched a new attempt to answer those questions by announcing the first global ecological tracking system for the commodities that drive tropical deforestation, from Borneo to Brazil and the Congo to Cambodia.

Trase — Transparency for Sustainable Economies — is the brainchild of the Stockholm Environment Institute (SEI) and the U.K.-based Global Canopy Programme (GCP). "Over the next five years, we aim to cover over 70 percent of the total production in major forest-risk commodities, for the first time laying bare the flows of globally traded commodities that are driving deforestation," said Toby Gardner, a research fellow at SEI who is masterminding the project.

Through transparency, Gardner hopes for accountability. And if the deforesters are accountable, he hopes they will stop — or be forced to stop.

The threat posed to rainforests by the international trade in agricultural commodities far exceeds any other. At least two-thirds of deforestation comes down to a few key commodities: palm oil; soy; timber; paper and pulp; beef; and leather; according to Forest 500, a program of the GCP that ranks corporations and others according to their progress towards deforestation-free supply chains. "We are all part of the deforestation economy," Forest 500 stated on its website.

According to a study by the non-profit Carbon Disclosure Project (CDP) published this month, the growing, trading, processing and selling of these commodities accounts for nearly $1 trillion in corporate revenues a year.

Under pressure from consumers and investors to decouple their supply chains from this destruction, some businesses have been promising to deliver deforestation-free supply chains. Dozens pledged, in the 2014 New York Declaration on Forests (PDF), to halve deforestation by 2020 and eliminate it by 2030. And the 400-plus members of the Consumer Goods Forum — headed by commodity-consuming giants such as Unilever, Walmart and Procter & Gamble —went further, committing to zero net deforestation by 2020.

Did they know what they were getting into? To have any hope of achieving such a goal, they need to know how clean their supply chain is. But even large corporations keen to meet their pledges, such as Unilever, admit they are ignorant about their own suppliers and what happens in the forests.

Large corporations keen to meet their pledges admit they are ignorant about what happens in the forests.

Not everyone will be convinced of such claims of ignorance. But Gardner insisted it is so. Indonesia, for instance, has more than 2 million small landholders growing about 40 percent of its palm oil. In any case, he said that Trase was developed as a direct response to the New York commitments to fill that data gap — for companies, but also for those that want to hold companies accountable. "Radical transparency," Gardner called it.

A number of NGOs have embarked on systematic efforts to track the ecological footprint of major commodity traders and processors. They include, for instance, the CDP and Oxfam’s Behind the Brands initiative for food companies. Katie McCoy, head of forests at CDP, sees "traceability" as the key to promoting sustainability. "Companies… really need to engage more meaningfully with their supply chain," she said.

Optimists hope it soon may be the norm in the corporate world. Investors are demanding it because, said James Zhan, an official at UNCTAD, the United Nations trade and development organization, "analysts increasingly see a positive correlation between sustainable performance and strong financial performance." This month, UNCTAD reported that 38 stock exchanges around the world had or were in the process of introducing sustainability reporting standards.

Some corporations are publicly keen to get a handle on their supply chains. They include Danone, one of the world’s largest dairy companies. "Transparency is the first major step in undertaking the challenge of eliminating deforestation from our value chain," Lucas Urbano, its sustainability manager, told me in Marrakech. He sees Trase as "moving away from the blame game, to start a practical discussion around issues and solutions."

So what exactly is Trase trying to do? The aim is to map complex supply chains by tapping into publicly available data such as shipping bills of lading, corporate statements and customs and tax records, along with information published by transport companies, warehouses, refiners, producers and traders. The trick is then to overlay maps of the geography of production and trading with maps of the geography of deforestation. The guilty parties then can be named.

The first supply chain to come under Trase’s microscope is Brazilian soy. Soy is one of the world’s most widely traded international commodities. Brazil produces around 30 percent of the global crop, and exported 73 million tons last year, more than any other country. In a world with fast-rising demand for meat and dairy products, soy is an essential source of feed for farm animals — nowhere more so than in China, which takes more than half of Brazil’s exports, 43 million tons last year. 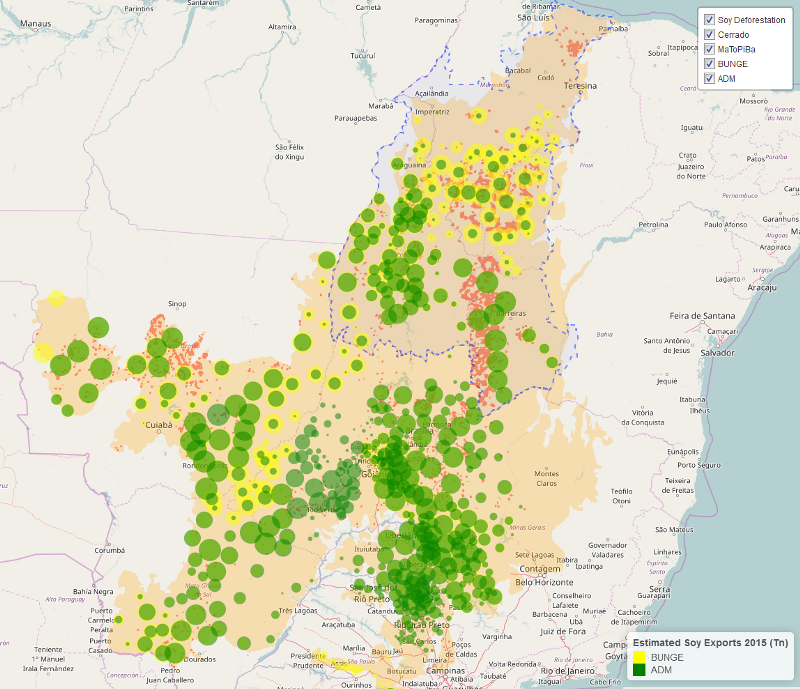 So far, so interesting. But that level of data detail is not enough for anyone interested in the environmental impact of such trades. Some Brazilian soy is sustainably produced; most is not. Gardner wants to know the precise source of the commodity, and what happened on the land before soy was planted.

"The supply chain data is already there. We simply stitch it together," said Sarah Lake of the GCP. "For example, port documents will detail that Cargill is exporting a shipment of soy that originated from [the Brazilian state of] Mato Grosso. With data sets on the ownership of soy silos in that state, we can bring in other trade data to narrow down the origin of the soy to a specific municipality."

In all, Trase has tracked 320,000 soy supply chains in Brazil, involving more than 400 companies, dozens of ports and hundreds of importers, all linked back to one of the 2,000 or so municipalities that grow soy, each with its unique ecological history. The data is still incomplete, admitted Gardner, "but we can now begin to link specific actors to deforestation. We go from having a supply chain for soy to a supply chain for deforestation."

The first conclusion is that the Amazon, so long regarded as the crucible of deforestation, is no longer the key issue in Brazil. A moratorium among many growers and traders on soy from deforested parts of the Amazon dramatically has cut deforestation in the region. "The soy frontier is now outside the Amazon," said Lake. Soy expansion is now in the country’s Cerrado region, a matrix of forests and grasslands that occupies a wide belt south and east of the Amazon rainforest.

The Cerrado in the south largely has been plowed up. Billions of dollars have been made by soy kings such as Blairo Maggi in Mato Grosso state. But not much further ecological damage can be done. Today’s soy frontier, where new biodiversity-rich land is being cleared to grow the crop, is northeast Brazil, an area known as Matopiba, which covers the states of Maranhao, Tocantins, Piaui and Bahia.

A 2016 report identified the cattle industry as still globally 'the largest commodity driver of deforestation.'

"We can see in satellite images and remote sensing data where the deforestation is happening and, from our supply chain data, we can then identify the commodity traders operating in that space," said Lake. Trase has identified the municipality with the biggest loss of forest to soy cultivation. It is Baixa Grande do Ribeiro in the state of Piaui, where the major traders Cargill and Bunge are the largest purchasers.

With many big traders — including Cargill and Bunge — committed to zero deforestation, the next step is to reveal whether those promises are bogus or genuine. The signs are not so good here. "We are finding that, when you get down to the detail, most companies’ commitment only apply to the Amazon — not the Cerrado, even though it has many forested areas as well as grasslands," said Lake. "It is the same companies that used to buy soy from the deforested Amazon who are now buying from the soy frontline in the Cerrado."

For instance, Cargill and ADM, another major trader with a zero deforestation commitment, operate in municipalities where 1.8 million acres of deforestation is "linked specifically to soy expansion in the Cerrado," according to Trase’s analysis. That does not necessarily mean they are responsible for that deforestation, but it raises questions about their role on the soy frontline. These are questions that, equipped with the new data, both NGOs and the corporations themselves can now ask.

Government regulators also could use such information in the future. The European Union is considering an Action Plan on Deforestation that would crack down on agricultural commodities implicated in deforestation from European markets. Adoption of this plan is urgent. Europe may have a reputation for caring about the environment, said Lake, "but our analysis shows that the EU’s deforestation footprint for soy in the Brazilian Cerrado is actually as big as that of China, which people talk about far more."

What next? During 2017, Trase plans to start tracking soy coming from Brazil’s neighbors, Argentina and Paraguay. The targets will be familiar. Oscar Rodas, of the environment group Guyra Paraguay, said when regulations on growing soy in the Amazon tightened a decade ago, many Brazilian firms slipped across the border and began clearing Paraguay’s Chaco forest instead.

Next is beef. Forest 500, in its 2016 report, identified the cattle industry as still globally "the largest commodity driver of deforestation," with only 16 percent of companies it surveyed having policies to avoid beef raised on recently deforested pastures.

After that, Gardner will target palm oil, first in Indonesia, next in Malaysia, and perhaps then the new frontier for the crop, in Africa. While Indonesia is keen to embrace traceability, Malaysia will be a harder nut to crack, said Lake, especially the country’s secretive state of Sarawak.

I remembered that as I flew over Sarawak’s endless palm oil plantations. It is too late for Sarawak. The forests that once covered the state are gone. But Malaysian palm oil companies are expanding into Africa, where data on who is ripping up rainforests is similarly hard to come by. There seems to be a pattern here. But if Trase can crack the supply chains of those companies, then maybe the forests of Africa can be saved.