The David and Goliath story is a common parable for the relationship between small, nimble startups and big, lumbering corporates — the new kid on the block swoops in and disrupts the old guard. Sometimes, it’s an apt comparison (just think about what happened to your local Blockbuster store), but often, corporates and startups can find opportunities working together that create better outcomes for everyone involved.

"There’s a lot of value that can and should flow both ways," said Scott Saslow, CEO of ONE WORLD, a firm that provides training and investing to impact-driven startups.

Saslow led a session at GreenBiz Group’s annual conference, VERGE 19, last month, where startup founders and investors discussed the potential win-wins they could build from working with big names.

There’s no standard definition for what makes a startup, but generally these companies are young, fast-growing and offer some sort of innovation that’s new to the market. However, just because corporates are much bigger and more established, that doesn’t mean they’re not innovative. The shared desire for new solutions can be fruitful ground for collaboration.

"Corporates are really hungry for ideas, for unique insights, for creative ways of thinking about problems, for the pure inspiration that comes from being close to entrepreneurial companies," Saslow said.

One way corporates choose to keep pace with the latest innovations is by investing in startups that can unlock future markets. This sort of strategic investment can be critical for cleantech companies, because traditional venture capital has been on the decline in that industry, in favor of technologies that are less capital intensive and quicker to provide returns. Recently, utilities have been leading this charge, putting hundreds of millions of dollars into investment funds such as Energy Impact Partners. Plus, oil and gas companies are making strategic investments in carbontech to potentially lower their carbon footprints.

Corporates also can be early customers for startups, helping them to massively expand their reach and profile. For instance, fast food giants Burger King and McDonald’s helped to accelerate the rise of plant-based protein companies Impossible Foods and Beyond Meat by tapping them as suppliers.

Even if corporates don’t buy from a startup, they can apply their expertise to help guide smaller companies in the right direction. Melanie McClare, CEO of wastewater treatment startup Swirltex, came to VERGE 19 from Calgary, Canada, where her company is based. Conversations with corporates gave her helpful insight into the state of the California market.

"Because of the water scarcity in California, the water reuse potential and the openness to new technologies, we left knowing that we would be opening up in California very soon," she said. 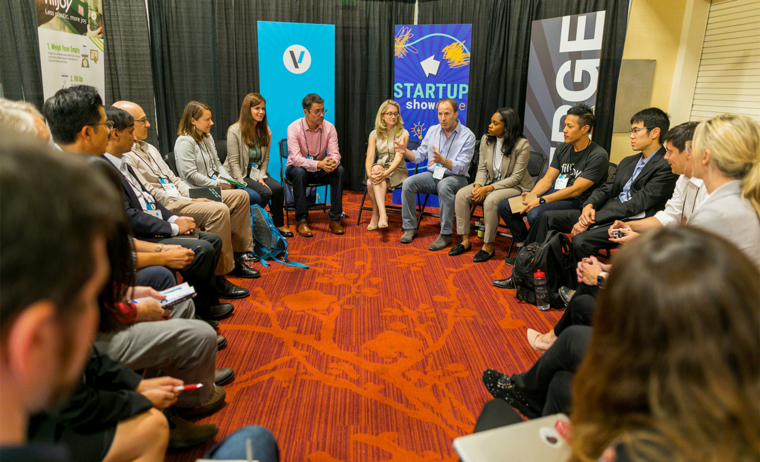 Even though a corporate can employ thousands or possibly tens of thousands of people, any sort of relationship with a startup — as an investor, customer or adviser — relies on one-to-one personal connections.

"The key is to find a champion within the organization," said Matt Logan, partnerships manager at Elemental Excelerator. "You have to find someone who really wants what you’re selling who’s going to go pound the table to push it through."

Sometimes an individual can take a while to come around. According to Skya Nelson, chief operating officer of circular apparel company Fed by Threads, his company normally takes 18 months to convert a customer, although he saw an increased level of commitment at VERGE 19.

"What we’re seeing is a true change in what people are doing," he said. "They’ve been talking about it for years, but this year, they’re actually buying. I think we’re in a critical mass here."

Carbon Engineering’s CEO Steve Oldham said that the direct air capture company recently has moved beyond the startup phase, partly due to support from corporate partners. He attributed the inbound interest from corporates to public pressure.

"Demand for action on climate change grows all the time," he said. "The large companies — the smart, large companies — are recognizing that that is both a threat and an opportunity. They turn around now and say, ‘How can we protect ourselves? But also, how can we be in this large, growing business?’"

Both Oldham and Nelson mentioned the surge of youth-led activism as a driver of the recent uptick in buying among corporates.

However, even with a growing sense of urgency from the young people taking to the streets and the scientific reports on the looming planetary crisis, corporate culture can move slowly.

Corporate pace is particularly slow in comparison to a scrappy and dynamic startup. "There’s often a bit of surprise at how long it takes to get corporates to make decisions," said Saslow of ONE WORLD. "I’ve often seen startups that have halted because they put their eggs in one basket in hopes of getting a corporate client on board."

A founder in the startup showcase at VERGE 19 likened dithering corporates to a "bad boyfriend"⁠ — hesitant to make commitments and follow through. Her solution? Start flirting with competitors. In the field of climate innovation, you snooze, you lose.