How a decaying Swedish city became an eco-friendly hub

Sweden has one of the highest per capita electricity consumption rates in the world (15,000 kWh per person per year) due to the relatively high heating costs caused by the cold climate (60 percent [PDF] of residential energy use is for space heating and domestic hot water), a sparse population distribution pattern, greater need for individual transportation and generally high levels of income. Yet the country emits very little carbon dioxide (5.1 tonnes per person per year) due to 78 percent of the country’s electricity being generated by nuclear power and large hydro. Swedes, however, are starting to sour on their two largest sources of energy, partly due to Fukushima and the move of several other European nations to phase out nuclear power. And the city of Malmö (pop. 307,000) is taking the lead by incorporating solar, wind and biofuel technologies through efforts to make it one of the most sustainable cities in the world.

Malmö, in southern Sweden, is the third largest city in the country. Various neighborhoods throughout the city are transforming from brownfield industrial sites into eco-friendly enclaves through the use of renewable energy, energy efficiency, green building and alternative transportation.

The district of Västra Hamnen (Western Harbor) was a decaying industrial area that was once a shipyard. When the shipyard closed in the early 1980s it left 6,000 people without jobs, an abysmal economy and soil highly contaminated by oil residues. The city of Malmö decided to rebuild the area, converting it from an industrial center to a knowledge and residential center, to be supplied by 100 percent renewable energy. In 1998 the University of Malmö was built in the Western Harbor and in 2001, a residential housing project of 350 apartments was built in conjunction with the European Housing Exhibition, Bo01 Expo.

The Bo01 houses were all built with sustainable materials and are powered by a 2 MW wind turbine that provides 99 percent of their electricity, plus a nominal 8 kW of solar PV. Daniel Skog, City of Malmo communications officer, told RMI, “Without hesitation I can say that the energy system in the first phase of the Western Harbor was world unique in 2001 and still today it is one of the largest urban local renewable energy systems in the world.” The area attracts around 3,000 technical visits every year.

Western Harbor also has an innovative district heating and cooling system. In the summer, cold water from the previous winter 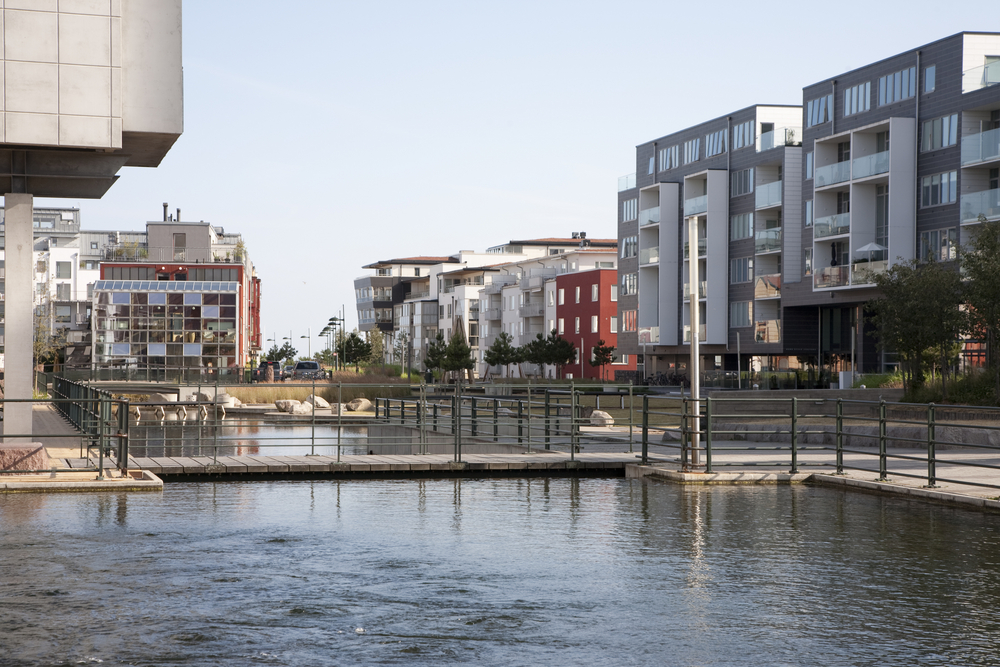 — stored 90 meters underground in aquifers — is pumped up (by wind-powered electricity) and run through a heat pump for district cooling. Once the water is heated it is pumped back down into the aquifers where it is stored for heating buildings in the winter. Over the course of a year over 5 million kWh of heat and 3 million kWh of cooling is produced.

The Western Harbor is home to 4,000 people and very few cars. The district is built so that residents can park their vehicles outside the residential area and walk to their homes. Buses connect the area to the center of Malmö every five minutes, and a car-sharing system reduces the number of car trips as well. Fewer parking lots are built and the money saved is invested in car sharing (all people moving into the area have five years of free membership in the car sharing network). Approximately 50 car pools are in Malmö, in which several people share a number of cars that are booked using a smartphone and paid for only for the time during which the car is used.

Another district in Malmö being redeveloped is Augustenborg, originally developed in the 1950s. During the '80s and '90s it experienced a lot of flooding. In 1998 the city revitalized the neighborhood, and one measure taken to reduce the flooding issue was to introduce an open storm water runoff system to divert runoff into canals and ponds. Ninety percent of the storm water now runs through the canals and ponds, and is cleaned by natural flora before reaching the ocean.

The next measure was to implement green roofs. Over 9,000 square meters of green roofs absorb rainwater, clean the air and provide insulation in the district. Green roofs have spread throughout Malmö, helping to reduce the urban heat island effect during heat waves and providing habitat for migrating birds.

Another exciting initiative begun in Augustenborg district was a study separating food waste to make biogas. Residents have 15 recycling centers in the district to dispose of food waste that is turned into biogas to run the public buses. This initiative also spread throughout the city, and Malmö was the first major city in Sweden to require sorting of food waste. All homes, apartments, businesses, restaurants, offices and stores must separate out their food waste to be turned into biogas to fuel buses and city trucks. Currently 200 city buses run on a mix of biogas from household waste and compressed natural gas.

A smart city in Hyllie

A third district in Malmö undertaking exciting sustainability measures is Hyllie, the city’s largest development area. In 2011, the city signed an agreement with VA Syd, Malmö’s waste management company, and the utility service provider E.ON to make Hyllie one of the most climate-smart districts in the region. When fully built out by 2020, the district will have about 9,000 homes and nearly as many office spaces, all powered entirely by renewable or recycled energy from wind power, solar power and biofuels. It also will be the testing bed for smart technologies for all of Malmö, including a large-scale smart grid for both electricity and heating and cooling.

Some pilot projects (PDF) to be tested in Hyllie include allowing consumers to monitor and adjust their energy use through smart apps depending on weather forecasts and production from renewable energy sources, and flow meters for home water taps. VA SYD will use behavioral science theories to make it easy for people to recycle and sort waste — for example, homes may have transparent sorting containers to make it easy to see who’s “doing the right thing,” and there will be mobile recycling centers so people don’t have to transport their recycling by car.

The first pilot project is already in place, with all apartments in one area equipped with smart home systems that regulate and control power output and energy consumption. Each apartment also eventually will have a screen allowing tenants to monitor their energy consumption and the associated cost.

The Hyllie train station is also home to Malmö’s first bike-and-ride system with free parking for 1,000 bicycles, storage areas for helmets and rain gear, restrooms, showers, lounges, bike repair areas and bicycle pumps all accessible to cyclists. A new and larger bike-and-ride facility recently opened in Malmo’s central station, with room for more than 1,500 bicycles, spaces for cargo bikes and a shower.

Malmö is also home to Sweden’s largest offshore wind farm. The 48 wind turbines at the Lillgrund 110 megawatt wind farm provide enough electricity for 60,000 households. Sege Park in Malmö was transformed from a hospital complex to a residential neighborhood powered with a 166 kW PV plant, the largest in Sweden when it was installed in 2007. In 2009 the country’s largest building-integrated PV system at the time was installed in Sege Park, with 100 kW of capacity across two roofs.

The city has made a large investment in transportation alternatives. Malmö has 490 kilometers of bicycle paths, and 25 percent of all trips in the city are by bike. Cyclists have priority at many intersections, where a sensor system is installed to turn the lights green when a cyclist approaches. In 2011, 2012 and 2013, the National Bicycle Association named Malmö the “Cycling Promoter City of the Year,” and in 2013 the cycling consulting company Copenhagenize rated Malmö one of the 10 best cycling cities in the world.

In addition, all city buses in Malmö run on a mix of biogas from local food waste and natural gas. By 2018 all buses will be powered by fossil-free fuels, the majority being by locally produced biogas.

This story originally appeared on RMI's blog and is reprinted with permission. Top photo of Turning Tower building in Malmö by \kimson via Shutterstock