Integrating information about the climate impact of different food options would give consumers power in their food choices and allow food-delivery companies to demonstrate climate-friendly values.

The COVID-19 crisis has affected most aspects of daily life, including how we get our food. Because the COVID-19 response has restricted restaurants to pick-up and delivery orders in many areas, business for on-demand food delivery apps such as DoorDash, Grubhub, Seamless and Uber Eats has increased dramatically.

Uber Eats claims to have experienced a tenfold increase in new restaurant signups, and some local restaurants say the percentage of orders placed through third-party apps has risen from around 20 percent to roughly 75 percent.

Even before the COVID era, food order and delivery apps were growing rapidly, and the sector was on track to more than double in value by 2025 — from $82 billion in 2018 to $200 billion by 2025. Projections showed that by 2023 about one-quarter of smartphone users, or 14 million Americans, will use these apps.

For the environmentally minded, the increased adoption of app-based food delivery services presents a unique opportunity to affect carbon emissions in the food supply chain.

One of the leading climate change solutions is the widespread adoption of a plant-rich diet, particularly in countries with a more "Western" diet. Adopting these habits has the potential to reduce carbon emissions by 66 gigatonnes CO2-equivalent, according to Project Drawdown. Compared to business as usual, choosing vegan options could reduce emissions by as much as 70 percent.

Third-party food delivery apps offer a valuable opportunity to connect consumers to the knowledge they need to adopt a climate-friendly diet.

We believe that food delivery apps can implement some basic features to help consumers be more aware of the environmental impact of their food choices.

While systematic change in food production at all levels is necessary to achieve goals for carbon emission reductions, influencing consumer behavior to shift towards low-carbon food options has the power to simultaneously encourage food producers up the supply chain to reduce the carbon impact of their offerings, while also empowering consumers to reduce their own personal carbon footprints.

A recent study in Science magazine noted that "dietary change can deliver environmental benefits on a scale not achievable by producers." However, a major roadblock is the lack of transparency surrounding the carbon impacts of food.

Many consumers recognize that animal products have some negative impact on the planet, yet most don’t truly know the extent to which meat consumption can drastically increase carbon emissions.

Indeed, according to a recent study by the Yale Center on Climate Change Communications, about half of surveyed Americans (51 percent) would be willing to eat a more plant-based, low-carbon diet if they had more information about how their food choices affected the environment.

Through a six-week climate innovation program at Yale, we envisioned two ways that on-demand food delivery apps could empower their users to make more climate-friendly food choices. We based our idea off a successful project at Yale demonstrating the effectiveness of environmental impact ratings on consumers — in this case, students at Yale’s dining halls.

Rate the Plate is an initiative designed by current Yale students through which dining halls display posters containing the calculated range estimates for the amount of carbon emissions from each available entree. After running both a small-scale pilot and then expanding to all Yale residential colleges, the organizers had students complete a survey to analyze the effectiveness of the posters and ratings. The results show that 62 percent of students had a positive response when asked if they reconsidered their food choices after seeing the ratings. 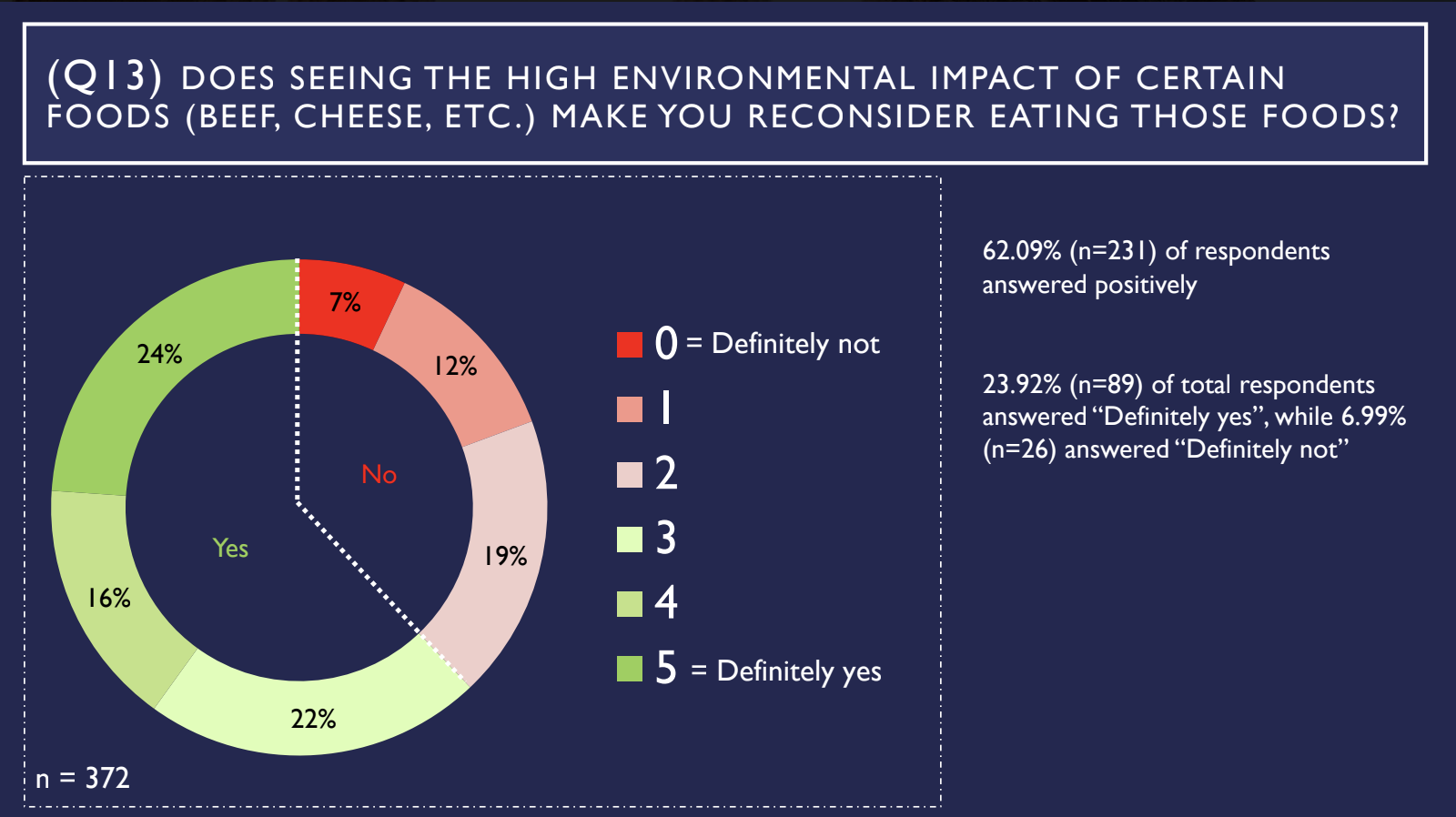 Additionally, when asked if they would like to continue seeing the environmental impact posters in the dining halls, more than 86 percent of students said yes.

The results of this project inspired us to consider other ways to empower consumers to make climate-friendly food choices.

We believe that food delivery apps can implement some basic features to help consumers be more aware of the environmental impact of their food choices.

First, food order and delivery companies can create short monthly quizzes for users to test their knowledge about the carbon impacts of various food options. An interactive, visually appealing quiz can inform consumers about how their own food choices can affect the planet as a whole. Positive messaging alongside discounts or other incentives can encourage users to take the quizzes and act on the information they learn.

For example, online consignment retailer ThredUp already runs an online quiz that consumers can take to determine their environmental impacts in the apparel sector.

Additionally, companies could implement carbon labeling within their order menu interface. There are various existing methods to estimate and label the carbon emissions associated with food dishes, but a simple number or range of carbon equivalents would allow consumers to compare meal options within the app. 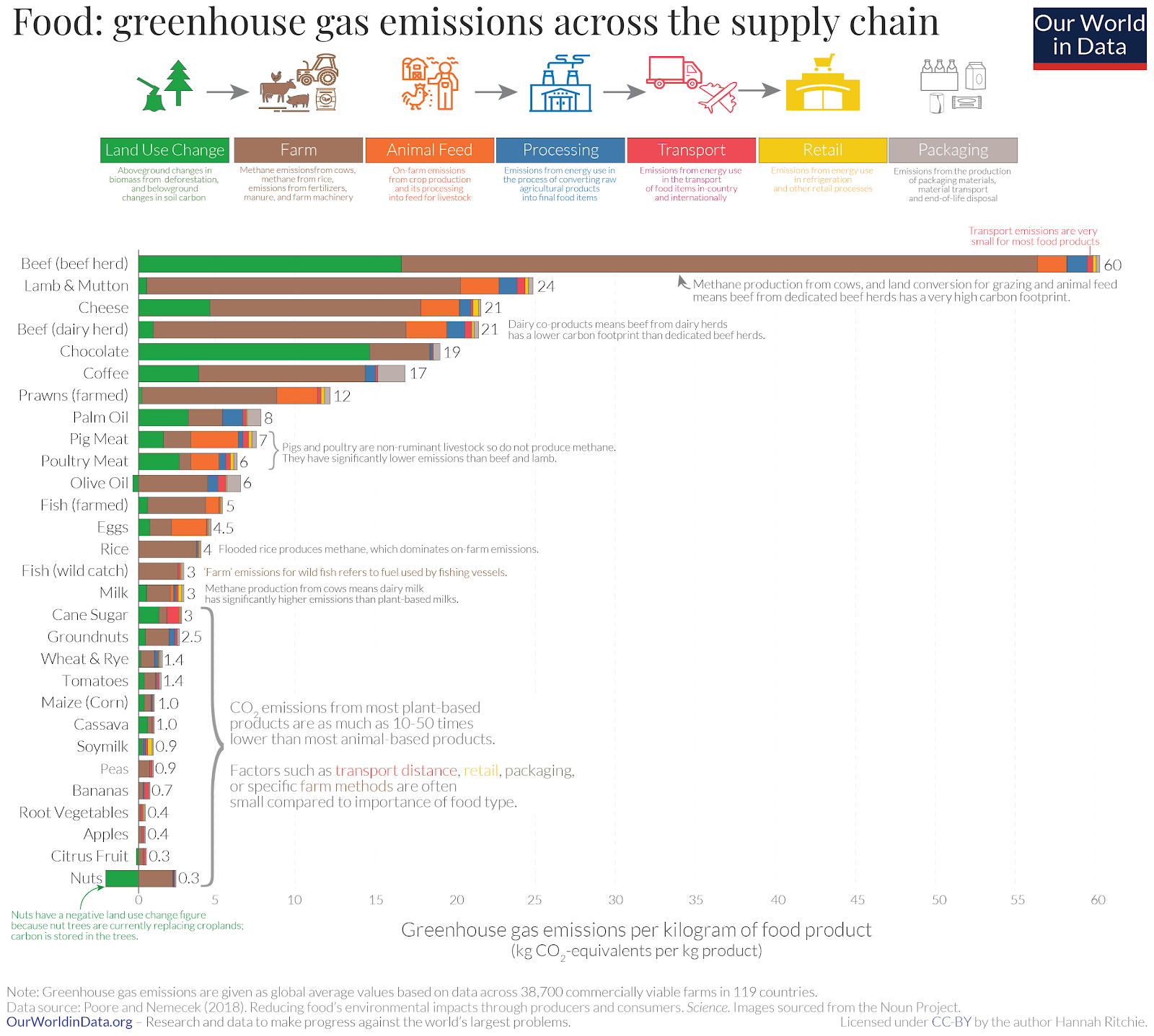 Using color coding or symbols such as trees to indicate high- and low-carbon footprint items also would be a non-obtrusive way to represent the information. The methodology could be explained in one of the quizzes released each month so consumers feel that they have both easy-to-read and accurate data. Order and delivery apps could include discounts for consumers opting into low-carbon food selections.

What’s in it for companies such as DoorDash and Snackpass?

Companies would be able to analyze the data on these strategies to fulfill internal corporate sustainability metrics on reducing GHG emissions, and such information could be advertised to demonstrate the company’s drive and success in sustainability compared to competing apps.

There is growing demand for sustainable business practices and purchasing options, especially among younger consumers. Being known as a climate-friendly option in the food-delivery ecosystem likely will be a selling point for many companies.

If food delivery apps implemented these various features, tracking the environmental impact would be relatively straightforward because it relies on digital technology and data collection. By looking at the number of people taking the carbon-impact quiz every month, companies could get a sense of the reach of these efforts among their customers. Eventually, they also could use the consumer order data to look for significant shifts in the carbon impacts of dishes people order.

What’s the role for restaurants?

While the relationships between restaurants and food delivery apps sometimes can be contentious, restaurants could benefit from advertising themselves as a climate-friendly option.

Restaurants would provide information about the ingredients lists of their dishes, allowing food delivery apps to calculate carbon impacts. As previously mentioned, discounts are offered to consumers who take the food carbon quizzes, which can help restaurants draw in new customers as well as highlight some of their vegan and vegetarian options.

Ideally, there would be a shift towards vegetable-based options and away from meat-heavy dishes after the carbon ratings and quizzes are implemented, which would demonstrate a positive impact on consumer decisions in terms of carbon emissions. This data from before and after the intervention also could be used to create a baseline to calculate how many kilograms of carbon dioxide emissions were avoided due to lower demand for meat-heavy dishes.

As food-delivery apps continue to gain popularity over the next decade, integrating information about the climate impact of food options has the potential to address the large impact the food-supply chain has on carbon emissions. This information gives consumers power in their food choices and allows food-delivery apps to demonstrate climate-friendly values.

Researcher
Yale School of the Environment

See all by Abbey Warner