How Eileen Fisher, other brands are rinsing toxics from clothes

The U.S. Federal Trade Commission has something to say about what you wear.

While not a fashion arbiter and unable to advise on attire for family gatherings, the FTC oversees what appears on the labels inside your clothes. As the federal agency responsible for enforcing the Textile Products Identification Act and related laws, it makes sure clothing is accurately labeled with its fabric content.

But it turns out, apart from these laws (and a few — including some state laws — that restrict certain hazardous substances from being used in children’s clothing), no overarching U.S. law regulates or requires listing of materials outside of fabrics that go into producing our clothing.

Why does this matter? Because manufacturers use hundreds of substances to produce clothing that don’t show up on clothing labels. And many of these are hazardous to the environment and to human health.

Garment production involves chemicals at every step of the way, whether the process begins “on the land” — as Eileen Fisher’s sustainability leader Shona Quinn describes the origin of cotton, linen and wool — or involves entirely manmade textiles. Some are used in the dye and fabric production process.

Others make fabric resistant to insects and biodegradation. Still others are used to give fabrics fire-, odor-, stain-, water- and wrinkle-resistant traits, or to assemble footwear and prepare finished garments for sale. Added to these are those used in decorative details such as printing and bits of metal.

In fact, the American Apparel and Footwear Association maintains a list of about 250 “restricted substances” used in clothing production whose use is legally limited somewhere in the world.

Some chemicals used in clothing production, such as dyes, have histories that date back centuries. Dye pollution was a huge problem in Europe and the U.S. in centuries past. Now that burden largely has shifted, with the industry, to Asia. Others, such as formaldehyde used in “permanent press” technology, are 20th century inventions.

Yet others, such as those involving nanotechnology — for example, nanosilver used to inhibit odor-causing bacteria — are brand new. Certain garment industry occupational hazards also are linked to fashion trends, such as the “stone washing” used to “distress” blue jeans that exposes workers to cotton and silica dust linked to respiratory and lung diseases. Formaldehyde is a known respiratory and skin irritant and carcinogen long used to create “permanent press” and other wrinkle-resistant fabrics. This involves applying formaldehyde and essentially baking it onto the fabric, in some cases enlisting the assistance of other hazardous chemicals.

Phthalates (PDF), associated with adverse hormonal effects, are used as plasticizers or softening agents in polyvinyl chloride — PVC — plastics used to make clothing (shoes and gloves, for example) and in decorative printing on T-shirts and other garments.

Also identified as endocrine disruptors are chemicals called organotins, frequently used as biocides — including in textile production — and to stabilize PVC. Recent research also has detected unintentional by-product polychlorinated biphenyls — PCBs — in certain colors of printing ink used on clothing, including for children.

Members of still another class of endocrine disruptors, nonylphenols, are a frequent ingredient in commercial detergents, in compounds used to apply dyes, and in other garment and textile production processes. They have been detected in water where finished garments are worn and washed as well as where they’re made.

New chemicals are used in clothing that we know far less about. Nanosilver, for example, is employed as an antimicrobial agent to inhibit odor-causing bacteria. Studies show that clothing treated with nanosilver can release it when washed. Nanosilver has been detected in wastewater and apparently can be taken up by plants.

Scientists are studying the effects of such antibacterial agents in the environment. Also of concern are solvents with numerous adverse health effects — including perchloroethylene and trichloroethylene — used in various clothing manufacturing processes, including spot cleaning (PDF).

Documented evidence of direct adverse effects of these substances on people wearing clothing is limited, often to allergic skin reactions. But there is ample evidence of harm to the environment where large-scale textile and clothing production takes place and to people who work in and live near these facilities — virtually all of which are now outside the United States. And, as the U.K.’s Environment Agency has reported (PDF), additional damage can accrue when chemicals used in fabric come out in the wash.

Unlike chemicals used in food, no single U.S. federal agency is responsible for overseeing chemicals used in clothing. The U.S. Consumer Product Safety Commission is tasked with enforcing laws that prohibit certain uses of heavy metals, some flame retardants and phthalates in children’s clothing.

Nevertheless, efforts are underway to reduce the use of hazardous chemicals in clothing manufacture — most of them voluntary industry initiatives. Some began in response to environmental advocacy campaigns (such as that led by Greenpeace) that highlighted occupational health and safety hazards and impacts to communities where textile dye manufacture and application and garment factories are located.

Nate Herman, AAFA’s vice president for international trade, was there when the industry group began publishing its restricted substances list in 2007. “We realized when we started down this road … that clothes and shoes really touch everyone. We want to make sure our products are safe and not harming people in any way,” said Herman. “[Plus] we didn’t want to be on the front page because we knew about a chemical and didn’t do anything about it.” 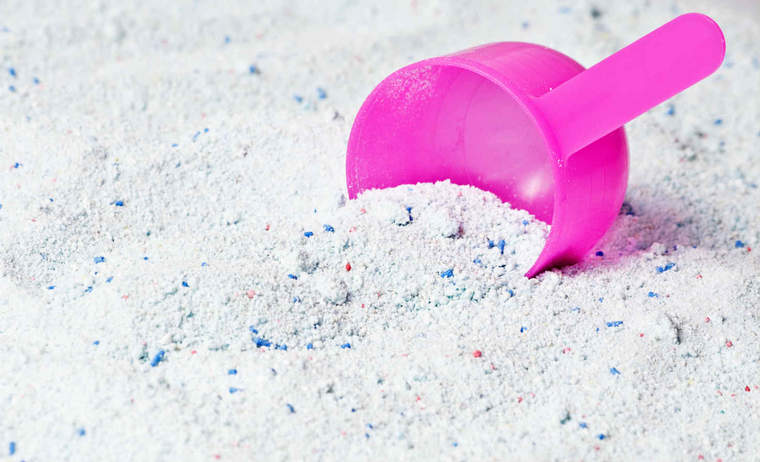 The world’s major clothing companies also have teamed up on a number of initiatives, including the Roadmap to Zero Discharge of Hazardous Chemicals and programs of the Sustainable Apparel Coalition and Outdoor Industry Association, whose members include athletic and sports gear manufacturers for whom waterproof, water- and odor-resistant clothing (and durable logo printing) is particularly important.

Whether motivated by local or national regulation of individual chemicals, NGO or consumer demand, given the way most clothes are now produced and sold — typically with far-reaching global supply chains and by brands that sell internationally — and the common challenges regarding materials, it has made sense for many clothing manufacturers to team up in their efforts to reduce hazardous chemicals use.

OIA corporate responsibility director Beth Jensen explains that the Roadmap to Zero Discharge program began in 2011 in response to a Greenpeace campaign called Detox that followed release of a report on chemicals used in producing clothing sold by international clothing brands, including Adidas, Calvin Klein, H&M and Nike. Among other things, the Roadmap to Zero Discharge program produces fact sheets for workers on chemicals in Chinese, Hindi, Urdu and other languages; audits facilities’ chemical use; and produces lists of chemicals targeted for phase-out and replacement with safer alternatives.

Also in 2011, OIA founded its own Chemicals Management Working Group. Given the special performance demands of its products, the outdoor industry “recognized a need from the start to create a specific … module for chemicals to help ask the right questions of suppliers,” Jensen explained. Given the global nature of the clothing industry supply chain and the many proprietary or trade secret chemical formulas involved, particularly in the dye process, this is a challenge.

For example, there are a lot of steps and companies potentially involved in producing a durable rain jacket, which might have lining materials, a waterproof exterior, zippers, threads, Velcro, mesh pockets, soft fleece around the hood and possible stretchy fabric as well. Each component may involve a separate chemistry and perhaps a different supplier.

To help with these proprietary challenges, a number of companies have begun working with a Swiss-based organization called Bluesign Technologies that acts as something of a clearinghouse and auditor of dye and textile production chemistries and environmental management. 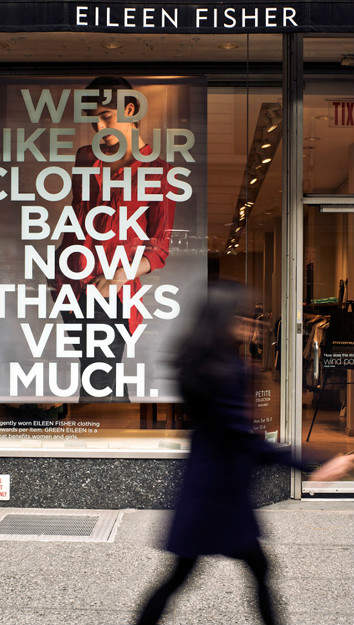 Given all of these challenges, how are companies actually doing?

While Greenpeace continues to watchdog major international brands’ progress in “detoxifying” their production processes and remains skeptical about how many are “walking their talk,” companies themselves report concrete steps forward.

According to Quinn, Eileen Fisher recently hired both a textile chemist and a supply chain traceability expert to address these questions. The company, she said, needs to understand not only where materials are coming from and the integrity of any certifications, but also wants to support research and development of “greener chemistry.”

H&M reports that in 2013 it eliminated from its supply chain the use of fluorinated compounds — also known as PFCs — for waterproofing. Esprit followed suit in 2014. But such a move turns out to be tougher for a company such as Patagonia, whose customers rely on durable waterproof finishes on outdoor gear.

Nevertheless, Adam Fletcher, Patagonia’s director of global public relations and communications, said that by next year the company will have shifted its waterproofing to a form of PFC considered less environmentally toxic than what it currently uses.

“It’s a temporary solution,” Fletcher said, while Patagonia works with chemical technology firms to develop a “fluorocarbon-free” waterproof finish. “There’s a lot of pressure on the industry to develop an alternative as quickly as possible.”

Fletcher notes that it’s important to consider the implications of changing use of a particular chemical for other aspects of a clothing item’s environmental footprint. For example, how long a garment lasts makes a difference, too. Asked about key steps in reducing chemical impacts of their products, Eileen Fisher’s Quinn echoes Fletcher, stressing the importance of extending the life of the garment — considerations that include physical durability, design elements that make a garment span multiple fashion cycles and programs that facilitate getting wearable clothing on to second users.

A place for policies

Asked if the current reliance on voluntary efforts rather than regulation is working, Quinn suggested that in some things “businesses can be more nimble than government.” But she also noted the importance to Eileen Fisher of engaging on policy issues — improving chemicals management policies to better protect environmental health and to be more responsible with respect to climate change and social issues.

Quinn pointed to the company’s membership in the American Sustainable Business Council, a group that represents more than 200,000 businesses and that’s been lobbying for environmentally protective chemicals policies, safer workplaces and policies that promote energy and other resource efficiencies.

As for how to consider your next clothing purchase, a “slow fashion” movement may provide valuable guidance for consumers who want to put their money where their values are. Supported by designers, clothing brands and NGOs and promoted by the likes of John Oliver and the just-released documentary “The True Cost,” it’s asking people to think twice about the social and environmental costs of the “fast” fashion that so often results in poor labor and environmental conditions.

Getting “off the endless treadmill of cheap, disposable stuff that doesn’t really last [and] choosing things we’re going to hold on to for a long time, that’s inherently the most sustainable move,” said “The True Cost” director Andrew Morgan.

We’re a long way from complete transparency in terms of what goes into a finished piece of clothing or ensuring that all chemicals used in its production are non-toxic. We’re equally far from overhauling existing supply chains to improve environmental footprints and chemical safety for everyone involved.

Those little fabric tags, it seems, are but the tip of the iceberg when it comes to informing consumers what goes into producing a single piece of clothing. “It is complex,” Quinn acknowledged. “There is so much opportunity to make things better.”

Meanwhile, as Quinn suggested, if possible, “think about the broader community” next time you choose a piece of clothing — and remember, as she noted, “we all live downstream.”

Eileen Fisher has designs on keeping clothing out of landfills

How the apparel industry is cleaning up textiles