How Fairphone is dialed in on supply chain sustainability

For most, having half a million in the bank would be a sign of success. But 12 months ago, then designer Bas van Abel wasn’t sleeping at night. “I had panic attacks,” admits the now CEO. You see, he had crowdfunded his idea for Fairphone – a mobile handset that would unveil the reality behind sourcing, production and distribution of electronics, and attempt to make all these stages as ethical as possible. No less than 25,000 customers got on board with the idea and gave van Abel a cool $435 each. The problem was - the phone didn’t actually exist yet.

With 10,000 flying off the proverbial shelves in only 3 weeks, he felt understandably antsy. “You’re looking at your bank account and thinking ‘oh shit, what are we going to do with this money?’” Not only did consumers part with their cash without a phone in their hand, but Fairphone didn’t even know how to make them. “We knew a lot about social on the human rights, but not actually how to make a phone.”

Fast forward to today and Fairphone is in the process of shipping its second edition to nearly 18,000 people, with van Abel heading up the Amsterdam-based company and nearly 30 employees. “Last year we had three,” he says, illustrating the growth. In fact, the morning that we spoke, van Abel had been conducting further job interviews.

Propelled quickly to the helm of the prospering start-up, he doesn’t even consider himself qualified. “I’m not a trained CEO,” he says, as if there were such a thing. “A couple of years ago, I was a designer with an idea. I wouldn’t have expected to be in this position.”

The idea is simple in its explanation, but complex in its execution – a phone that’s fair. “If you say you’re going to make a fair phone, you have to put yourself in a horrible position to take some hits,” he says, adding that the world isn’t black and white.

Fairphone is about rigorous as it gets when it comes to regulating the supply chain. With over 300 individual components derived from 30 minerals, a mobile phone is a very complicated product to keep track of, and there are a number of issues that the company has been address, not least conflict minerals. When I ask if van Abel if the product contains such material, he answers with yes – and no.

Fairphone can now trace two of its biggest minerals all the way to their mines in the Democratic Republic of Congo: tantalum, extracted from coltan to make capacitors (a source of energy in printed circuit boards) and tin, used in the soldering paste on circuit boards. “For the other materials, traceability is getting better and better.” While excellent efforts are being made, without comprehensive auditing across the supply chain of its entire inventory, conflict-free materials cannot be entirely guaranteed.

Congo might be an interesting choice for the company to source its minerals from, considering the mines there are “not as well organized” in terms of health and safety and wages compared to mines outside the country, but Fairphone “wants to contribute to the situations where improvements are needed,” says van Abel. 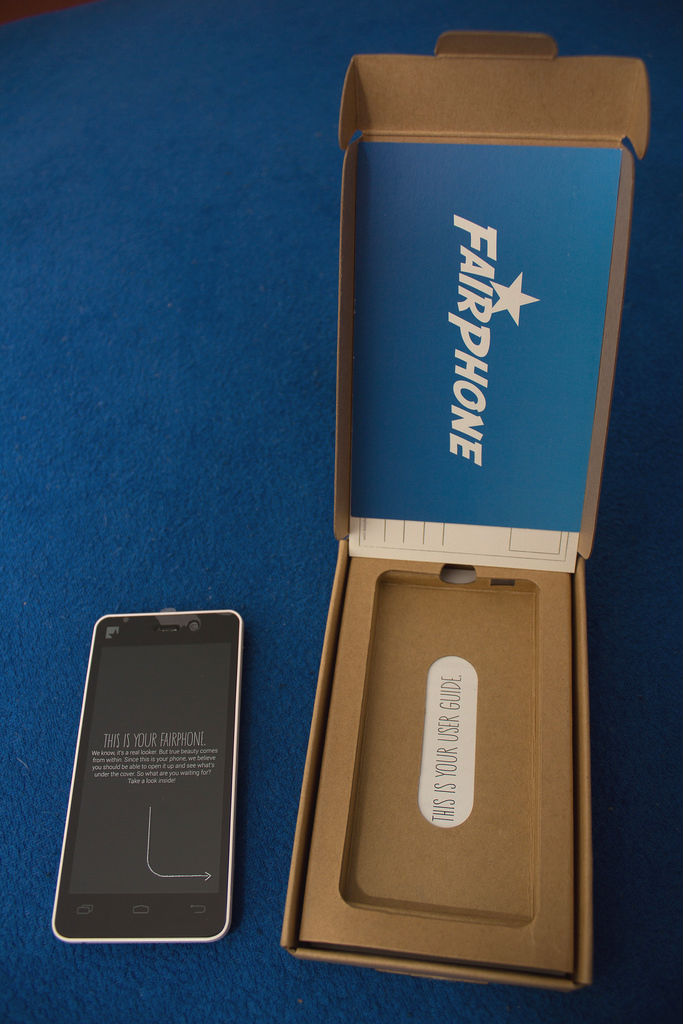 Moving up through the value chain, the factories where the phones are manufactured present their own difficulties. Fairphone couldn’t simply pay the 100 people working on their phones within their Guohong factory in China a premium wage when there’s another 900 working for other companies receiving six times less salary. “You create envy,” van Abel explains.

To address this, Fairphone recently launched an election program that enables workers to air their views with external partners, including the company itself, to discuss how to distribute the ‘worker welfare fund’ - $150,000 on what is mutually agreed to be beneficial. The first worker representatives were elected by the factory employees last month, and for each Fairphone sold, $5 is invested in this fund.

Admirable as its programs are, van Abel admits that “Fairphone will never be 100% fair because it’s always thinking about how to improve things.

“When you go to Congo to mines that are conflict free, but there’s still child labour, how is that fair?” he asks. Meanwhile, even the fairest phone in the world would be somewhat dampened if consumers were replacing it as regularly as the updates are coming out.

Van Abel doesn’t deny this. “It’s full of conflict. Designing is creating and destroying at the same time. Even the product in your hand is part of an evolution – it’s part of the next phone.” That said, Fairphone brings ‘fairness’ to the consumer level too, making the phone easy to repair thanks to online manuals, and easy to order parts at a reasonably low cost. “This adds to the value.”

And what about having a competitive advantage – with a quad-core CPU (enough to power a laptop) and a pricetag of $415, it’s comparable to other leading smartphones (not quite a Galaxy or an iPhone mind, which are higher up the market.) If all supply chains get regulated equally, which is part of Fairphone’s vision, what would the company be but yet another phone manufacturer? (Albeit a small one in an industry of giants.)

“I’m not in this business for making phones,” van Abel acknowledges. “We have to stay small to make disruptive change.” This means, in terms of products and supply chain at least, that the company can’t have a big impact. “25,000 phones is nothing” in the grand scheme of things, but it’s a huge amount when you consider that this is manufactured by a company that didn’t traditionally know how to make them.

Rather, “we want to create a product that has a proposition on fair. That will have the real impact,” says the CEO. “It makes a big statement that people do care.” Van Abel wants the industry to tap into the growing demographic of conscientious consumers, and hopes that Fairphone demonstrates the appeal of a social mission. “There is a huge market for putting social values first in the way you do business. If you do it well, your company will benefit.

“The conversation shouldn’t be around phones; it should be around supply chain.”

So what’s next for the CEO, who doesn’t really think himself as one? True to his sentiments on constantly evolving, “we’re working on the next phone, which will be released about this time next year.” And his sleep patterns have been restored for now.

This article first appeared at 2degrees. Top illustration of hardware production by Alex Oakenman via Shutterstock.

Mondelēz to measure sustainability of its coffee farmers

See all by Victoria Knowles