How far would you run to change a polluting industry?

Graham Ross, CEO and co-founder of Australia-based Kusaga Athletic, wants to disrupt the way apparel is produced around the world. His quest has taken him across the globe, from Brisbane to Sydney to Singapore, to running a marathon on the Great Wall of China, to London and more. I talked with Ross about how Kusaga came to be, the "World’s Greenest T-shirt" and much more. 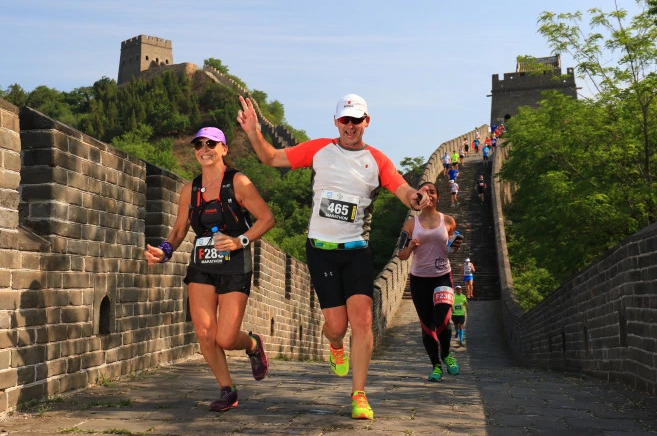 Lew Blaustein: First of all, before we get into your background and how Kusaga Athletic came into existence, I have to ask you, what does Kusaga mean?

Graham Ross: My business partner and I were looking for a word that meant recycle but not in English. So Kusaga means "recycle" in Swahili. We thought it sounded good and that Swahili is spoken in a part of Africa where running is religion. So there you have it.

Blaustein: Now how did you come to launch Kusaga? Have you been in the apparel business?

Ross: Not originally. I’m from Maryborough, a small, inland country town, about three hours’ drive north from Brisbane in Queensland in the northeast of Australia. But I always wanted to be in television production so I needed to get myself towards a city. I got my start at two stations, one in my hometown and then a larger station on the Sunshine Coast in Queensland. In both cases, I was the guy who did everything: from news to on-air, to commercial production and directing for sports like soccer. Also music festivals.

Blaustein: What a great start to a career in TV production. This was after college, I presume. Where did you go?

Ross: Indeed. So the next step for me was to go to a station in Brisbane, the third largest city in Australia and on to the politics beat. But I wanted to get to the biggest market, Sydney. Turns out, only 18 months into my tenure in Brisbane, an editor was needed for a primetime show in Sydney. I flew down there for a trial run one morning, got offered a job at lunch and moved there two weeks later.

I worked on a ton of programs: primetime, lifestyle and sports shows, you name it. Now, this was in 1995, when the TV production world was changing from videotape to digital. At that time, no one really knew what the opportunities of the new digital editing equipment would be, so I got training and quickly became schooled in it, in particular on a system called AVID, which worked like a tricked-out Mac with specialized software. In the early days, it was somewhat complex and buggy and not many people were expert in it. Yet it was in demand.

I was shocked when I learned about the horrific environmental impacts of polyester and cotton on water quality and greenhouse gas emissions.

So I saw an opportunity to start an AVID-based business. I was newly married at the time, yet spent more than my house was worth on an AVID system. It took awhile before I got my first piece of business, editing a corporate video for a nail salon, of all things. From there, we built up to handle post-production for many prime time shows in Australia.

Ross: Oh, yeah. And we grew rapidly, especially as cable TV started to explode in Australia. But, after a time, I got sick of making programs for networks without having any ownership, so I formed a company with two former clients. We started in one room and grew to having a staff of 50. We produced our own shows and documentaries that aired on National Geographic Channel, Animal Planet and many others.

Blaustein: You hit the big time.

Ross: Yeah, it was great but it nearly killed me. It was very stressful, I was working seven days a week, dealing with lawyers more than producing, my weight was up to almost 200 pounds.

Blaustein: So what did you do?

Ross: Closed the business, moved to Singapore and followed my wife, Jane, and her job there with MSN for Asia-Pacific. This was 2008. Jane is a former journalist and she ran content for them. So I became a house dad for my kids, then 14 and 9. And I built up a new network of friends, including those in the triathlon world. I started doing them and really got into it. At a dinner party I met Matthew Ashcroft, who would become my business partner. He said he was going to run the Great Wall Marathon.

Blaustein: There’s a marathon run on the Great Wall of China?

Ross: A good chunk of it is run on the wall itself, yes. Anyway he asked, I said no, he called back, I said I’d do a half marathon. He called back and wouldn’t take no for an answer. So, we bonded as we were training for the race. Talked about business — Matthew was in TV but is 10 years younger than I so has a slightly different perspective. He wanted to be in a business with purpose. We started to explore what that looked like.

Meanwhile, I did a bunch more triathlons, including an Ironman, and running races. After a time, I looked in my closet and saw that I had a million "finishers’ shirts" (T-shirts included in goodie bags by race organizers) that I never wore. The sponsors got nothing out of them because I’m sure I wasn’t unique in stuffing them in a closet. I also had no idea what fabrics were in those shirts. So I started to do research. Found out they were, not surprisingly, made of polyester, nylon, spandex and cotton. I was shocked when I learned about the horrific environmental impacts of polyester and cotton on water quality and greenhouse gas emissions. I was convinced we needed to do it better. I did some more research and found there were a bunch of fibers in labs that were not toxic, but were not commercially available at the time.

Blaustein: So you and Matthew, a couple of TV guys, researched your way into the athletic apparel business? Did you have any knowledge, beyond internet research, of fabrics, of materials?

Ross: Not really. But we said to ourselves that we need to fundamentally reimagine the textile industry. You see, textiles hadn’t evolved. It was a lethargic business with a tremendous amount of waste. And we were stupid enough, I guess, to think we could make fabrics that were better for the environment and offered superior performance. So we put up our own money to start up Kusaga Athletic.

Blaustein: What did you do first?

Ross: Serious research and development. We went to a factory in Korea; told them we have a bunch of natural fibers — bamboo, eucalypt and cellulose (waste wood) — and would like you to make them into yarn and then fabric. These fabrics would be compostable and biodegradable.

[Textiles] was a lethargic business with a tremendous amount of waste. And we were stupid enough, I guess, to think we could make fabrics that were better for the environment.

Blaustein: What did you want the fabrics to ultimately become?

Ross: We started out with shirts for running, yoga, sportswear, gym and the outdoors, targeting the environmentally focused, active person. Went to market late in 2015. Our first efforts were T-shirts for corporate events. Earth Hour became an early customer. We did a Kickstarter campaign in 2016 that raised $16,000, garnered 200 pledges and orders for hundreds of shirts. But there were significant challenges.

We’d moved our manufacturing to Malaysia but the factory shut down. So we wrote our supporters a letter, telling them what happened. They wrote back saying, in effect, "We want our T-shirts but believe in your mission, so keep the money, and do what you have to do. We believe in you." That gave us the spring in our step that we needed. We looked to Ho Chi Minh City, Vietnam, and found the child of Vietnamese immigrants to the U.S. who had come back to be a seamstress. We showed her our fabrics; she had to learn how to work with them and did so in record time. That allowed us to get our shirts out to the pledgers who were really happy. So we had achieved one of our dreams to make an environmentally friendly T-shirt that performed at a high level. But we still needed to upgrade our design and feel for our sportswear shirts.

Blaustein: How did you do that?

Ross: We found a designer, originally from Bulgaria, now based in Sydney. She had run factories before, very direct. She played around with a bunch of designs. I was the model. We found that the sleeves were too long, didn’t feel good. So we went with a cycling-style sleeve, which felt much better.

In fact, we kind of look at ourselves as a sort of a sustainable Under Armour. Or better still, as a fusion of Under Armour and Patagonia. Our Greenest Tee is made out of all biodegradable, compostable ingredients called ECOLITE, which is super for everyday wear or getting active like yoga.

Blaustein: Kusaga is poised for the next step in its product life cycle. Does retail play into that? And when will Kusaga establish a beachhead in the U.S.?

Ross: We are looking to grow sustainably but, with that said, retail partnerships are next. As for the States, I’d say you will be seeing us in the not-too-distant future.