How feasible is California's carbon-free-by-2045 goal?

How feasible is California's carbon-free-by-2045 goal?

California Gov. Jerry Brown has signed a new law mandating that the electricity the state consumes not cause carbon emissions by 2045.

He also issued an executive order that goes even further: It commits California to "achieve carbon neutrality" across the board and not just for power generation by 2045. Together, these steps codify California’s ongoing transition away from relying on fossil fuels for energy. This effort has been ramping up since 2011, when Brown signed another law committing the state to deriving a third of its energy from renewable sources like wind and solar power (PDF) by 2020 — not including big hydroelectric dams.

Based on more than 30 years of research related to solar energy, by my assessment, California can meet the law’s ambitious goal as long as it continues to implement programs that encourage the rapid expansion of renewable energy in the state.

The new law actually sets multiple targets rather than just one. It commits California to draw half its electricity from renewable sources by 2026, a share that would rise to 60 percent by 2030.

To take the next step, rather than mandating that all power be renewably sourced, state lawmakers established a 100 percent "zero-carbon" goal. They did not define this term, but it is understood as including wind and solar power, big hydropower plants and other sources of electricity that do not generate carbon dioxide.

Utility-scale solar and wind electricity increased from 3 percent in 2010 to 18 percent in 2017 in California, exceeding prior state targets, largely because solar prices have dropped sharply in recent years.

Being open to a wide range of technologies makes meeting the 2045 target easier and allowed state Sen. Kevin de Leon (D-Los Angeles), the original bill’s author, to amass broad support for the bill.

About 56 percent of the power California generated in 2017 came from sources that don’t emit carbon. That puts it more than halfway toward this new goal by 2045. 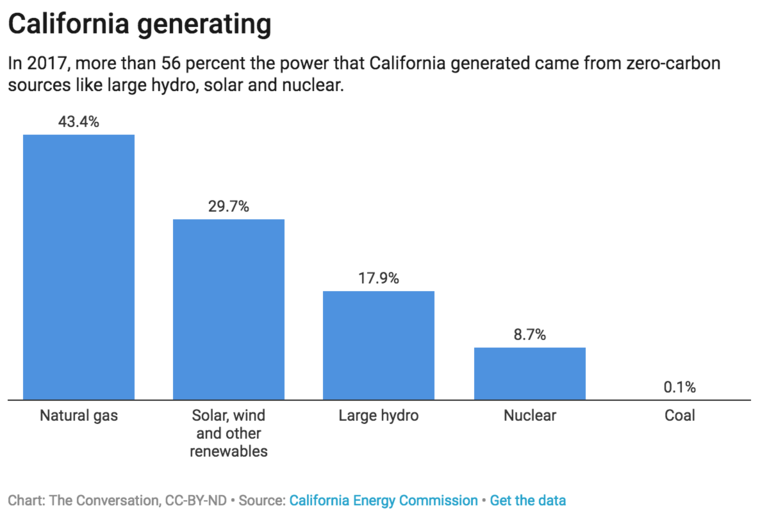 However, the Diablo Canyon plant, California’s last nuclear power station, is slated for decommissioning by 2025, and no other reactors are in the works. This closure would eliminate the 8.7 percent of the state’s carbon-free power that came from nuclear energy.

Nearly all of the remaining 44 percent of the state’s electricity is generated by burning natural gas, and virtually none comes from coal. Going completely zero-carbon would require phasing out the state’s natural gas power plants.

On top of wind and solar energy, other generation options include geothermal, small nuclear reactors and carbon dioxide sequestration.

One quirk about this legislation is that it deals only with utility-scale power. It would not preclude private electricity-generation facilities such as the diesel generator a farmer might use to pump water. Nor would it count the power generated by a homeowner’s rooftop solar panels.

When the sun shines

One complication is that the state’s mix of energy sources can vary a great deal, even from one hour to the next. If the electricity generated from these renewable sources is approximately doubled, as I estimate is necessary to meet the 2045 target, the power available in the middle of the day would greatly exceed the demand for electricity at that time.

This challenge shifts throughout the year.

On July 24 and 25 (PDF), Californians were asked to voluntarily use less electricity between 5 and 9 p.m. to avoid an outage because of hot weather. Prices spiked by more than a factor of 10, helping to keep demand within the supply.

On those days, renewably sourced electricity never met half of the demand for power. 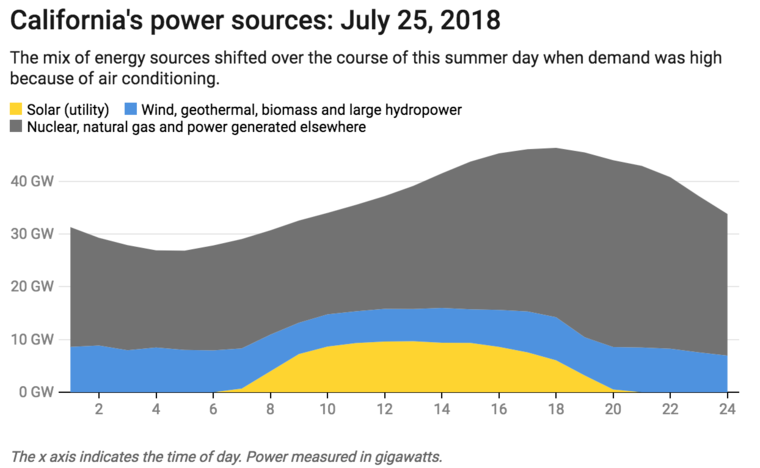 Due to this degree of variability, relying heavily on renewable energy will require ample energy storage and big investments in grid-based technology.

Today, the expected demand for electricity is balanced by the Independent System Operator, an entity that controls the flow of electricity on the grid and selects the lowest-priced sources of electricity available.

Pumped hydro storage, electricity generated from water pumped to a reservoir, is the state’s most common form of storage today. While limited to locations with large dams, the amount of energy stored this way could be increased in California, as recently proposed for Hoover Dam.

Big lithium ion batteries are becoming more affordable and are beginning to be deployed on the utility scale. As battery and solar prices drop, it may become attractive to disconnect from the grid and use electricity generated by a solar system and stored by a battery.

Lower battery costs are also spurring the sales of more electric vehicles. Ideally, these vehicles could be charged at times when electricity is plentiful and cheap. By 2045, I believe they could be helping make the grid more stable.

Other options are becoming available. One example is utility-scale compressed air storage, where energy is stored as pressurized air.

And there is growing interest in solar thermal plants, which generate electricity from sunlight’s heat and use high-temperature storage to continue generating electricity after the sun sets.

The University of California Merced and many other wholesale electricity customers are saving money by using thermal storage. They chill water when rates are low and use the chilled water for air conditioning when electricity prices are high.

Because California’s new law does not require that every watt be generated within California’s borders, utilities could keep buying electricity from nearby states, as long as they verify its origins are in keeping with the new law’s requirements.

And because the law does not define "zero-carbon," it provides flexibility in how the state can meet this new target.

For example, California would allow the continued operation of natural gas plants when their output is coupled with purchase of renewable energy certificates, credits issued for the generation of renewable electricity that may be sold, from a utility that generates solar or wind power.

These credits arise through several arrangements. Perhaps the most common is through rooftop solar systems. Small-scale solar energy supplied about 5 percent of California’s electricity in 2017. It is likely to grow because of California’s mandate for solar panels on most new homes, starting in 2020.

In assessing whether the goal of going zero-carbon by 2045 is realistic, it is worth considering that solar energy has grown for years at a pace that far exceeded projections thanks to technological progress, government policies such as California’s new law, market forces and the public’s demand for renewable energy.

Professor of Materials Science and Engineering

University of California at Merced