Food refrigeration and cold storage equipment are finding their way into rural areas of the world that need them the most.

Yet, this shift is not happening fast enough. While projects are benefitting dozens, thousands and even tens of thousands of rural farmers, this represents scant progress in a world where an estimated 1.1 billion people live without reliable electricity and basic cooling services. Scarcely 4 percent of India’s food (PDF) moves through cold chains. Roughly half of Nigeria’s 186 million people have little or no access to refrigeration.

Still, these fledgling efforts are notable — and useful to learn from.

Some of the biggest advances are taking place in India, the first country in the world to launch a National Cooling Strategy. Cold storage access is also a key pillar in Prime Minister Narendra Modi’s ambitious target to double farmer incomes by 2022.

Managed access to refrigeration and cold chains can increase the competitiveness of rural subsistence farmers, turning them into agri-businesses.

"It is hard to overstate the importance of cold chains in delivering Prime Minister Modi’s target," said Toby Peters, a clean cooling expert at the United Kingdom-based Birmingham Energy Institute, working closely with India on its cooling strategies. "Managed access to refrigeration and cold chains can increase the competitiveness of rural subsistence farmers, turning them into agri-businesses that can serve India’s burgeoning, more affluent urban populations."

The government is providing subsidies, grants, loans and training to help farmers, farmer produce organizations (FPOs) and private businesses invest in cold chain logistics, including packhouses where perishable crops are stored, ripening chambers and refrigeration vehicles. Much of the activity is through the National Center for Cold-Chain Development (NCCD). Last year, the Union Ministry of Food processing reported a near fiftyfold jump in cold storage projects receiving government support.

The government is also prioritizing clean cooling solutions that will not exacerbate climate change pollution. That means using solar and other low-emission technologies to power packhouses and cold transportation methods rather than conventional diesel-powered equipment. 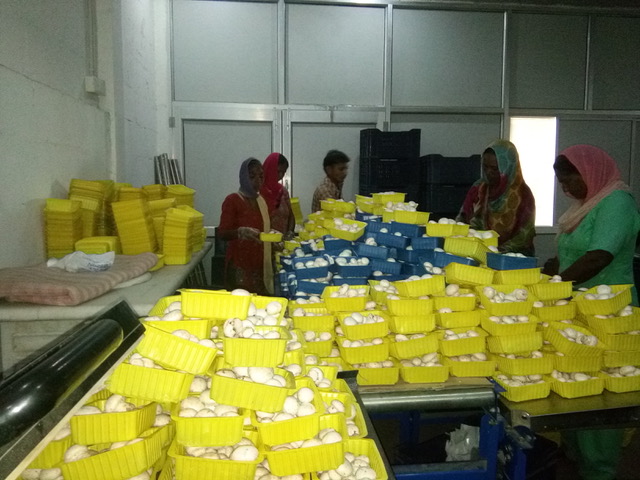 While details are scarce on India’s progress, a soon-to-be-released study by the Shakti Sustainable Energy Foundation and Birmingham Energy Institute highlights a half-dozen examples of rural farmers benefitting from their first cold storage.

Among them is Seema Gulati’s and Amit Gupta’s Elle Farm in the state of Haryana. For years, the couple grew only staples such as potatoes, onions and carrots, and at harvest time — having no access to refrigeration — they were forced to accept low prices in glutted local markets. Then in 2014, they joined the NCCD, took a cold training course and invested in cold storage equipment.

Now, with a 30-ton cold storage unit, a 60-kilowatt solar system and three refrigerated vehicles, Elle Farm is growing high-value mushrooms that it is selling in supermarkets in Delhi and Gurugram — 155 miles away. The farm’s revenue has tripled, and its net income has doubled. Gulati and Gupta are looking to expand to markets in Mumbai and Bangalore, which could double their revenues again.

"For years, we were barely breaking even because we had no way to refrigerate our crops and sold everything locally at low prices," Gupta said. "Now we’re selling in bigger markets where prices are exponentially higher. Cold chains were especially helpful for growing specialty mushrooms, like Cordyceps militaris."

Global cooling companies are also stepping up their efforts in India — among those, Danfoss (PDF), working with the Confederation of Indian Industry Cold Chain Task Force to transform the country’s massive banana sector.

India grows one of every three bananas in the world, yet nearly a third are lost due to poor handling practices, no refrigeration and poor market access.

But that’s changing. For the past four years, Danfoss India has been helping hundreds of banana farmers in the state of Tamil Nadu improve their growing, harvesting and cold storage practices. Drip irrigation is increasing the farmers’ yields and improved access to pre-cooling and ripening technologies is helping them produce a high-quality product for commercial markets.

Unless farmers are fully utilizing the cold storage units for multiple crops, the paybacks are too long.

The results have been impressive. "The interventions have resulted in three times higher value for the farmers and a wastage reduction of nearly 20 percent," said Ravi Purushothaman, president of Danfoss India.

For the first time, India’s bananas are being exported by ship to Europe. "Ten years ago, we had 10 employees. Today, 200 families are dependent on this farm," said banana farmer V.G. Sivamani, part of the Danfoss effort. "New technologies like cold chains and reefer containers have made it possible."

Similar partnerships are emerging in East Africa. One such effort has 10,000 rural farmers in Kenya selling their fresh produce to Twiga Foods, which is distributing it to thousands of street vendors, who then sell it in the capital, Nairobi. Before being sold, bananas and other crops are cooled and ripened by super-efficient cold storage units at Twiga’s food warehouse in Nairobi. The units, developed by InspiraFarms, use 70 percent less energy than traditional refrigeration systems and have up to two days of thermal backup capacity if there’s a power outage.

InspiraFarms’ technology also has captured the attention of the Rwandan government, which, like India, recently adopted a National Cooling Strategy. Last fall, with support from the World Bank, it installed 10 of InspiraFarms’ solar-powered cooling units in a half-dozen rural areas that have no electricity or refrigeration. The units are expected to benefit as many as 100,000 smallholder rural farmers.

Progress is not always consistent, however.

In some situations, markets are not yet mature enough to support cold chain ventures. APM Terminals, an international logistics company in Nigeria, learned this lesson just over a year ago.

In December 2017, it organized a trial shipment of 18 tons of fresh tomatoes, loaded in crates on a refrigerated truck, for a 621-mile delivery from tomato-rich Kaduna to the economic hub Lagos. While the tomatoes were delivered, no more shipments have been made due to poorly established retail connections, lack of market demand and road congestion, according to Augustine Fisher, African communications manager for the company.

In other instances, solar refrigeration is too costly for rural farmers with limited means and market access. The nonprofit group TechnoServe learned this lesson working with thousands of Kenyan mango growers to improve their production and post-harvest practices. Farmers experimented with numerous technologies, including small solar cooling units. In the end, fly traps and better packaging proved to be the best bet for improving mango yields and extending their shelf life.

"Unless farmers are fully utilizing the cold storage units for multiple crops, the paybacks are too long," said Isaiah Kirema, program manager for TechnoServe’s YieldWise program, a collaboration with the Rockefeller Foundation aimed at reducing food losses in Africa.

Still, TechnoServe’s engagement and training for 20,000 growers is yielding results: 82 percent of the farmers have adopted at least one post-harvest management technology and loss reductions have been cut by a third.

These 550 Kenyan women are saving a forest

Why it's time to invest in clean energy in Africa

See all by Peyton Fleming