The world wastes more than $750 billion worth of food every year — 1.6 billion tons of food left in farm fields, sent to landfills or otherwise scattered across the countryside, plus 7 million tons of fishery discards at sea.

That waste has gotten a lot of attention lately, mostly in terms of human hunger.

Hardly anyone talks about what all that food waste is doing to wildlife. But a growing body of evidence suggests that our casual attitude about waste may be reshaping the way the natural world functions across much of the planet, inadvertently subsidizing some opportunistic predators and thus contributing to the decline of other species, including some that are threatened or endangered.

A new study in the journal Biological Conservation looks, for instance, at California’s Monterey Bay, where the threatened steelhead trout population has declined by 80 to 90 percent over the past century. Efforts to restore the species along the Pacific Coast have focused on major initiatives such as the recent demolition of a dam that had blocked access to critical steelhead breeding grounds on the Carmel River, which empties into Monterey Bay. 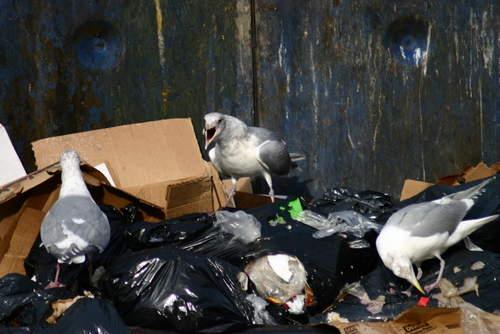 But a team of co-authors led by Ann-Marie Osterback, a marine ecologist at the University of California-Santa Cruz, suspects that garbage and fishery discards also might play an underrated part in the problem. The hypothesis is that local food wastes inadvertently subsidize Western gulls in the Monterrey Bay area, and these gulls in turn prey on the juvenile steelhead trout.

The dramatic decline in steelhead numbers normally would mean that fish-eating birds around Monterey Bay would have to move down the food chain to survive. That’s what’s happened to Brandt’s cormorants and marbled murrelets, and their populations have declined as a result.

According to Osterback, the number of gulls have doubled or quadrupled in different parts of the bay just since the 1980s — thanks to a steady diet of landfill garbage and fishery discards.

But according to Osterback, the number of gulls have doubled or quadrupled in different parts of the bay just since the 1980s — thanks to a steady diet of landfill garbage and fishery discards. Osterback and her co-authors found that each individual gull eats less steelhead than in the past, but the combination of a greatly increased gull population and a severely reduced run of steelhead trout adds up to a dramatic rise in predation pressure. She estimated that the gulls may eat up to 30 percent of juvenile steelhead en route to the sea.

And on the western side of the Mojave Desert, common ravens and coyotes that feed on garbage from nearby communities are jeopardizing the recovery (PDF) of the threatened desert tortoise.

"Ravens scavenge when refuse or carrion are available but they are also capable hunters," a study in Ecology found. The researchers put out 100 dummy models of juvenile desert tortoises and found that ravens attacked 29 of them over a two-month period. Other studies have linked subsidized ravens to the decline of such threatened or endangered species as marbled murrelets, California least terns, snowy plovers, San Clemente loggerhead shrikes and sandhill cranes.

Animals, of course, have been picking up the food scraps we leave behind forever — or at least long enough to change the course of their evolution. That’s how certain wolves evolved into domestic dogs. But nothing in the history of the planet approaches the scale of modern food waste, in farm fields, on streets and beaches, in landfills and strewn behind fishing boats.

This abundance of garbage is also a factor in the resurgence of brown bears.

Food waste can increase a species, too

This abundance of garbage is also a factor in the resurgence of brown bears (PDF) (population 17,000) and wolves (population 11,000) in modern Europe. Garbage is also the main reason leopards have been able to adapt to living in and around major cities in India. They prey on other animals that scavenge from abundant garbage — dogs, pigs, goats and rats — and they also feed directly on butchered carcasses discarded in the open.

Removing or controlling garbage is not new as a conservation tool. The U.S. National Park Service did it in the 1970s at Yellowstone National Park, closing dumps and ending the artificial feeding of bears there.

But it also sparked one of the nastiest fights in the history of U.S. conservation, especially as the park service began killing or translocating "incorrigible" bears. Cut off from their familiar food sources, the grizzlies struggled and their population declined for a time. Gradually, though, the bears shifted to a more natural diet, moved away from the roads and ultimately flourished. The Yellowstone grizzly population roughly has quadrupled since the end of artificial feeding in the 1970s, to about 700 bears in 2014.

Measures to address the garbage problem on a broader scale today likely will be at least as challenging. On the one hand, such measures can reduce populations of subsidized predators without the controversy caused by programs to kill or relocate nuisance animals.

A study in France demonstrated that closing a dump led to a 49-percent decline (PDF) in fertility of herring gulls, which are also opportunistic predators. Another study in the western Mediterranean found that a temporary moratorium on trawling had a dramatic impact on gull reproduction, by removing the discards that otherwise can make up as much as 73 percent of their diet.

But when the European Union was debating a ban on fishery discards in 2013, ecologists warned of "unforeseen knock-on consequences." They pointed out that 52 percent of seabird species worldwide now scavenge fishery discards to some degree. A ban would leave some species hungry,and some might turn to eating other bird species to survive.

The EU is  moving ahead with its ban in three phases. Now in its second year, it’s too soon to say how it is affecting seabirds. Daniel Oro, a fisheries ecologist at the Mediterranean Institute for Advanced Studies on Majorca, worries about the potential effect on the critically endangered Balearic shearwater, a seabird that frequently depends on fishery discards while rearing its young.

"We are going to have smaller populations of Balearic shearwaters, that’s very clear," said Oro. "Populations suffer a period of readapting to the new system. Many individuals are going to die, as happened with bears at Yellowstone."

But Oro also considers the cleanup essential. Before the closing of the only dump on Majorca, he said, researchers found that many birds there "were low-quality individuals. They had physical problems; they had lung problems and other diseases that were not easily seen from the outside." The dump supported birds that natural selection would have weeded out in the wild.

Cleaning up our food waste mess and shifting wildlife populations back to natural resources increases competition and ultimately "benefits higher quality individuals," said Oro, "so that’s good news." But, as at Yellowstone, he acknowledged, getting there will be painful.