I’ve been thinking about getting an electric car, but I haven’t yet. This made me consider a more important question: What will it take to get people driving plug-in electric vehicles? Not just me, but the millions of people the auto industry and environmentalists alike want to see in electric vehicles.

So I set out recently to answer this question, starting at Electric Vehicle Day in San Diego, one of many such events held in cities across the U.S. as part of National Drive Electric Week in September.

Like you, perhaps, my curiosity comes from both the personal and professional parts of my life: Living in the suburbs of San Diego, I drive to work, missing the days I commuted on the Bay Area’s B.A.R.T., and want to swap my fossil-fueled car for one that can save money and the environment. I also do this stuff for a living. I started my career using social marketing techniques to change individual behavior on health and environmental issues. As head of brand purpose at i.d.e.a., I now help our clients, including an auto industry responsibility group, move people, products and culture in a way that’s good for business and good for the world.

With that perspective in mind, here’s what I think it will take to move the needle on mass adoption of electric vehicles:

If you look at electric vehicle advertising and promotion today, it’s all over the map when it comes to consumer messaging. Some car companies emphasize environmentalism, with one ad for the Mistubishi i-MiEV going as far as challenging the reader: “We hear a lot about protecting the environment these days. But what are you doing about it?”

Others take what I’ll call the “hybrid bandwagon effect,” leveraging that segment’s familiarity to make electric vehicle adoption seem like a step, not a leap. “Think of it as two cars in one: hybrid and electric,” said Bill Payne, electric vehicles sales manager of Kearny Pearson Ford, as we got into the Ford Fusion Energi plug-in hybrid for a test drive. Or, your family can have both: “Hybrid for me … plug in for you,” suggests an ad for the Ford C-MAX, which comes in both options, showing two of the cars parked in front of a hip, urban loft.

Another approach takes head-on the often diagnosed “range anxiety” that prevents potential buyers from going electric. By emphasizing technology advances and charging availability, these messages make electric vehicles seem like a breeze, or at least not an inconvenience. “Plugs into your life,” shouts the headline of one Honda ad featuring the Accord plug-in.

Finally, there’s the “innovator” angle. “Be a pioneer,” urges a Blink charging station ad, with the body copy wisely recognizing, “Being first has its challenges and its rewards.” This kind of messaging speaks to folks like Luke Day, a soldier and father of 2-year-old girl, who explained why he and his wife bought — and love — the futuristic looking BMWi: “It’s kind of dorky! It pumps up my geek cred.” 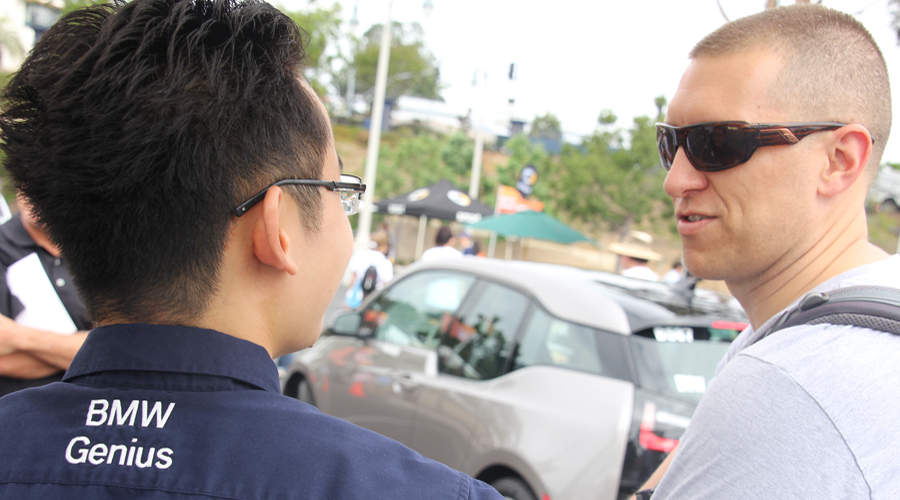 John Zayne and Luke Day discuss the virtues of the futuristic BMWi.

There’s certainly room, and maybe a need, for all these messages in the marketplace. As marketers know, the key to reaching consumers is speaking to each audience segment, emphasizing the most important benefits and the right reasons to believe in what you offer. But any brand looking to win in the electric vehicle sector — whether car, charging station or solar — should be certain who they’re trying reach, and what will move them to action.

The real win-win comes when the consumer’s truth and the brand’s truth are aligned. We advise our brand partners to get crystal clear on their authentic value proposition, which is much more than the traditional unique selling proposition found in lots of marketing-speak. It’s not enough to emphasize what’s different —you need to find and articulate your true purpose. And these days, people expect a brand’s purpose to be about making a difference, not just making money.

While your brand purpose should remain constant, electric vehicle marketers will need to change their message for different audiences, and as we move along different stages of the technology adoption curve, from the innovators, to the early adopters, to the early majority and beyond. Less that 1 percent of cars in the U.S. are electric vehicles, which means that it’s “innovators” who are buying electric vehicles. For now, the best marketing messages should be geared for these cutting-edge consumers.

2. It’s more important for salespeople to be smart than cool

One of the biggest obstacles to electric vehicle adoption is salespeople. As one study from UC Davis notes, salespeople are not well informed about electric vehicles, creating a huge chasm between consumer expectations and the reality of buying an electric vehicle. Or in other words, the result is lots people who are unhappy with the electric vehicle buying experience — even more than your average car shopper. 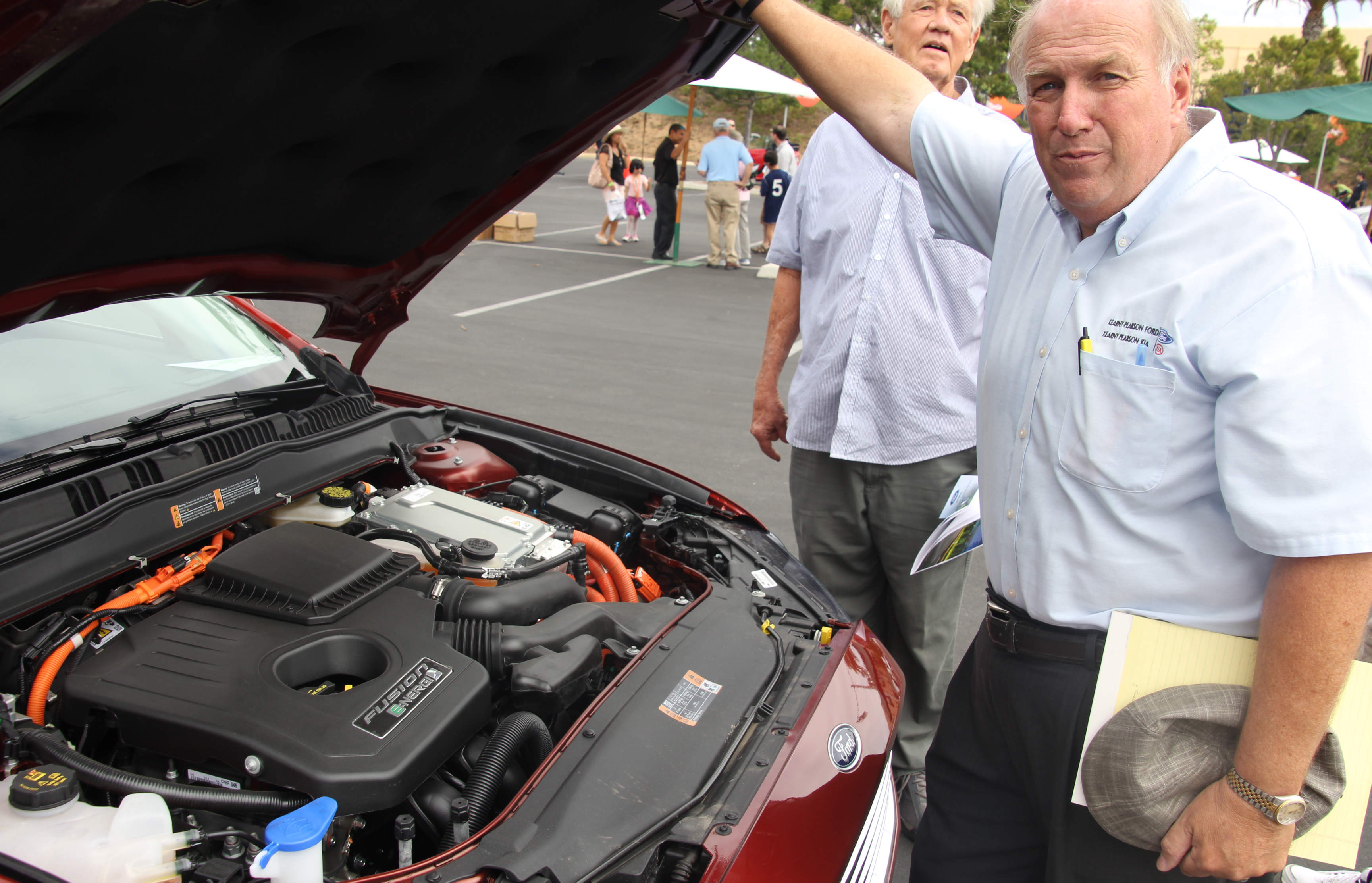 Bill Payne offers a peek under the hood of a Ford Fusion.

As Payne, the Ford salesman, described the likely interaction: “You have a consumer coming in, they’ve been online, they’ve researched it. Now they walk into a dealership and they have a salesperson in front of them that’s like a deer in the headlights.” (Payne, it seems, is the exception: He’s stayed up on the latest electric vehicle info for all four years he’s been selling them.)

And if you’re smart, you don’t have to be cool — as some of the salespeople at Electric Vehicle Day were trying to be. In fact, like good brand ambassadors, many of them looked like the cars they were selling, with messaging to match. The BMWi sales team was dressed with German efficiency in matching polo shirts, though the “BMW Genius” stitched on the backs read “We’re trying to be cool like Apple” to me.

“It’s a mindset,” said John Zayne of BMW of San Diego, describing the motivations of the eco-conscious customers who are drawn to the BMWi.

The guy talking up the bright blue Fiat 500e, Brent Oani of Bob Baker Fiat, had a swarthy complexion and thoughtful outfit to match the car’s Italian styling: skinny black jeans, white shirt and shiny brown leather shoes, with a hat and aviator glasses that Brad Pitt might wear. “It’s a lifestyle. It’s hip to be green,” said Oani, who could equally have been talking about his customers and himself. Brent Oani dresses the part as he shows off the Fiat 500e.

The Tesla team also conveyed the cool factor and exclusivity of the Model S with their no test-drives policy — the only car there that day with a “You can look but you can’t drive” message.

And Payne, the Ford salesman? Well, let’s just say he fit with a Midwestern car company: straightforward and no frills.

3. Happy customers are the best salespeople

Word-of-mouth marketing is important for anyone trying to move a product or service. But it’s especially important with the still-novel electric vehicles, because the innovators driving them around can be the best salespeople. I saw this happening at EV day: Luke Day was eagerly talking up the BMWi to folks checking it out. But when he later moved to the Fiat booth so his wife could try the 500e, Day continued to be a BMW brand ambassador, telling would-be Fiat customers why he loved his BMWi.

Nissan knows that happy customers are responsible for a majority of its Leaf sales. Brendan Jones, who directs marketing for the Nissan Leaf, told a crowd of electric vehicle enthusiasts at the 2012 National Plug In Day event in San Francisco, “More of our sales come from you guys than come from our sales and marketing efforts.” Smart car companies will leverage this phenomenon for maximum effect.

Whether your marketing electric vehicles, charging stations, solar or similar green technologies at the front end of the adoption curve, I suggest you follow the roadmap above: deliver an authentic value proposition to the right audience with messaging to match; make sure your salespeople are smart, not just cool; and use your happy customers to spread the word.

All images via Amon Rappaport

Does Ford Have a Better Idea?