By helping to reduce the cost of collecting and disseminating air pollution data, information technologies such as networked sensors, remote sensing satellites, geographical information systems and smartphones are making it easier to monitor air pollution in cities around the world.

The ubiquity and relative affordability of this technology means that scientists can count on citizen-collected data to supplement existing monitoring stations.

Traditionally, the EPA has relied on an extensive network of stationary equipment in urban areas to assess if air quality is meeting or exceeding public health standards. These measure such pollutants as carbon monoxide, nitrogen dioxide, sulfur dioxide, particulate matter, hydrocarbons and photochemical oxidants.

However, because the monitoring network is designed for air quality regulation, it doesn’t give a detailed picture of air pollution in a given community to tell people about their immediate surroundings.

Scientists long have struggled to understand exactly where and how people are exposed to air pollution; monitoring is complicated by the simple fact that air is everywhere, yet scientists can’t be.

Thanks to recent digital developments, they don't have to.

Google’s Street View cars have been known to capture a diverse array of images, from the quotidian to the bizarre, and now they are being used to monitor air pollution. Taking place during the DISCOVER-AQ study by NASA and the EPA, the cars clocked 750 hours of drive time and gathered 150 million data points, correlated with data from EPA stationary measurement sites. The EPA provided scientific expertise in study design and instrument operations as part of an agreement with Aclima.

The information will enable more people to be aware of how cities "live and breathe," and join the dialog about how to improve air quality, Google said in a statement.

This fall, Aclima and Google say they will expand mapping efforts to the San Francisco Bay Area and work with communities and scientists to explore applications for this new environmental tool.

A slew of wearable high-tech devices, used in conjunction with mobile phones, is empowering users to reveal air pollution in real time. On a macro scale, these technologies can help inform scientists to map our mercurial exposure to air pollutants, which can assist policymakers in addressing these problems in the places where they most affect public health.

A company called TZOA has developed a small sensor that clips to your clothing, purse, bag or backpack to measure air quality, temperature, humidity, atmospheric pressure, ambient light and UV exposure. Data streams to the wearer's smartphone app, which then delivers real-time readings that allow users to take action. After the sensors are released at the end of 2015, the company plans to stream data to a cloud that will create “environmental” maps freely available to all users.

Brooklyn-based startup AirCasting offers a system that uses a mobile, Bluetooth-enabled air monitor not much larger than a smartphone to measure carbon dioxide, carbon monoxide, nitrogen dioxide, particulate matter and other pollutants. An Android app records and formats the information to an emissions map.

What about the global South?

Although these cutting-edge technologies virtually are becoming cheaper by the minute,  their current price tags still make them too impractical to employ in the global South — where they are needed most. This is yet another example of the problem with trying to translate “smart cities” to less-wealthy nations.

Anyone who has seen the otherworldly images of Beijing’s denizens donning air pollution masks to safely walk China’s capital can see how air pollution poses a growing threat to emerging economies. Air pollution in China contributed to 1.2 million premature deaths in 2010, representing a loss of 25 million years of healthy life, according to analysis by the Global Burden of Disease Study. 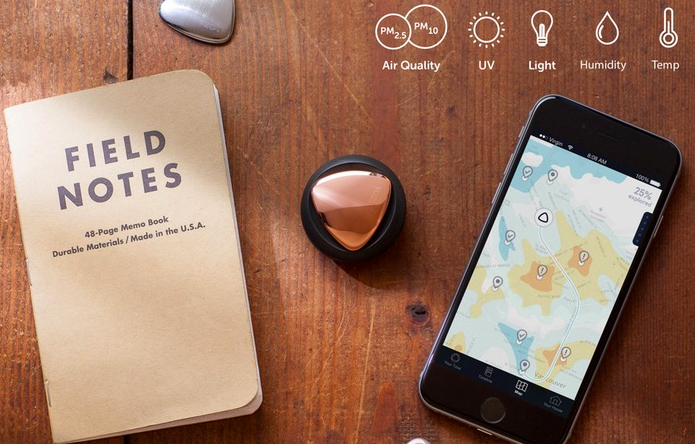 And it’s not just China — Brazil, India, Russia, as well as several other countries in Latin America, Asia and sub-Saharan Africa  face deteriorating air quality as their economies grow.

Sensors won’t solve everything, but they can help. A low-cost device called Clarity, created by students at the University of California at Berkeley, clips to your bag or belt with a carabiner and periodically samples surrounding air as the wearer travels. A small optic scanner identifies pollutant particles. The tech is designed to make it possible to monitor air quality at the macro level in some of the world's less wealthy but heavily polluted regions.

Air quality in the U.S. is a mixed bag

The United States has much better air quality than decades ago — thanks in no small part to the Clean Air Act — but nearly 138.5 million Americans, or around 44 percent of the nation, still live where pollution levels are too often dangerous to breathe, according to the American Lung Association’s State of the Air 2015.

And all of this air pollution creates significant health, environmental and economic impacts, the EPA stated. Air pollution is tied to higher rates of respiratory problems such as asthma, more birth defects and increased cancer risks.

The environment can be damaged from air pollution when toxic air pollutants and the chemicals that form acid rain and ground-level ozone can harm trees, crops, wildlife, lakes and other bodies of water.

Even the economy can be adversely affected by air pollution, when pollution-related illness dampers worker productivity and agricultural crop and commercial forest yields are reduced.